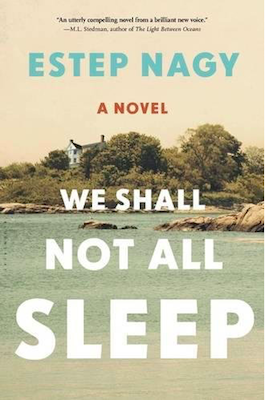 The following is from Estep Nagy’s debut novel, We Shall Not All Sleep. Set on the fictional Maine island of Seven over the course of three summer days in 1964, it moves among the island’s communities as longstanding tensions become tactical face-offs where everything is fair game for ammunition. Nagy's writing has appeared in the Believer, Paper, and elsewhere. He is the writer and director of The Broken Giant; his plays have been produced across the U.S.

Lila pushed open the screen door and then closed it behind her again, gently. In the hallway, a line of sweaters and raincoats hung from hooks. She looked from the shadows into the living room, and saw that she’d been right: Billy Quick sat on a couch, holding a candle in one hand and a large book in the other. Rapt, kneeling boys and girls surrounded him.

Draw down the blind, Jim, whispered my mother, Billy read aloud from the book. They might come and watch outside.

He looked up and Lila thought he saw her, but she could not be sure. The children saw only the story.

Billy paused and was now repeating himself, dramatically—

“And there they are!” he shouted, pointing at Lila behind them.

The children screamed bloody murder. Some of the boys, pitched forward while they listened, spilled helplessly over as they tried to turn and yell and hide all at the same time. When they saw that it was only Mrs. Hillsinger, just a lady in a white dress holding her shoes, they all exploded in laughter. The boys who had not fallen down launched themselves gleefully on top of the boys who had.

“Enough! That’s where we stop tonight,” Billy said. “Noooooo!” “Off to bed! Right away, or you’ll be keelhauled!”

The boys tried lazily to disentangle themselves, while the handful of outnumbered girls unfolded their legs, stood up, and melted away upstairs. Catta emerged from the bottom of the pile, saw his mother, and tried to sneak past her.

“There you are!” Lila said. He was caught. He stood up straight, like a soldier. Lila looked for a long time at the different parts of his body, as if she were counting his limbs. “Why were you out of bed?” she said, finally. It was not what she had wanted to ask him.

Lila could see no clues at all—nothing to confirm or deny Diana’s claim that Catta was in love with the farmhand Sheila, whatever that would mean at his age. It was not that Lila wanted to stop time or to control him: Catta should be in love a thousand times, if necessary.

But please, she thought, not yet. Give him another year, another month. Do not take this peace from him just yet.

“Go to bed,” Lila finally said.“Dream of kittens and rabbits.” It was what she always said to him before bed, but Catta never did. He had dreamt once of an eagle that dropped straight down out of the sky, hunting a rabbit. He ran past his mother and up the narrow stairs to the bunk room, and as he lay down, Catta was sorry to be in bed and not on the bare floor of the hayloft, listening for the slow change in Sheila’s breathing. He was so tired that he was asleep even before his mother had begun her silent evisceration of Billy Quick.

Downstairs, Catta’s brother, James, who was fifteen, was asking Billy for Treasure Island so he could read ahead. He was desperate, Lila thought, for some mark of distinction and furious that it was being denied him. While James pleaded, Lila chose to compensate for all the injustice in the world by wrapping her arms around her older son.

“Let me see it for just one second,” James said.

“I don’t remember exactly how it ends,” Billy said to James, starting to laugh. “But I will tell you that, in my experience, things end badly for pirates.”

James was humiliated. If he had shown up at the Hill House in the middle of the night, the Old Man would have screamed and thrown him out. And now his uncle was laughing at him.

In fact, Lila knew, Billy was laughing at her sudden embrace of James, who clearly did not want to be touched—laughing at the futility and narcissism of the gesture. But James wouldn’t know that. He would take it badly.

It was much too late for any child to be up, even an older child like James. Even worse, James’s absurd pleading made her feel somehow less right to be angry with Billy for keeping the children up.

“Go to bed, darling,” she said to James. “Set an example.” “Why are you here?” James said to her sharply, and he left the room. It was typical of him to give her exactly what she wanted, and also to make her pay too much for it. The remaining boys followed James upstairs, leaving Lila and Billy alone.

“Ann and Barbara are so adorable,” Lila said about Billy’s daughters—her nieces—when he returned from the kitchen. “They have such tiny knees.”

“The boys were having an argument down by the tree line,” Billy said. “I thought the book might calm them down.”

Billy and Hannah had married very young. Her sister was only  twenty, and a few years afterward, in fact just after Lila’s own wedding, her sister cut off the Blackwell family in general, and Lila in particular. It could not be put more simply than that.

Hannah was scathing about their poor father, who worked for a big bank. She flatly accused Lila, who was (Hannah said) the clear favorite in the house, of conspiring with her parents to keep her small and simple and complicit. She used that word over and over again: complicity. And it was not only Lila: nearly anyone who had known Hannah growing up was similarly abandoned. The happy couple had moved above Ninety-sixth Street, well into Spanish Harlem, and Hannah taught in the public schools there while, amazingly, Billy continued his Midtown life of a financier. Lila’s  pleading letters and phone calls went unreturned. She had been enraged and then sad and then optimistic and then resigned, and all of it was futile. And then Hannah had died.

Lila walked outside, where the bellbuoy continued to be silent. This little trip to the Cottage, Lila thought, had been a total catastrophe. She had learned nothing about the Sheila situation, she had infuriated James, and she had abandoned her guests. Her mother would be appalled on every count.

“I thought I heard a ghost this afternoon,” Billy said as the Cottage screen door slammed behind him. “And its voice was very much like John Wilkie’s.”

“Oh—yes,” Lila said, laughing. “John is here with us. It was very last-minute—I hope it’s not awkward.”

“Not at all,” Billy said. He was lying, she knew—but still, they could invite whomever they pleased. “Jim’s taken a job with Keene Wilkie,” Lila said. “Really?” he said.

This was not yet public information, and Billy seemed genuinely surprised.

“Here or there?” Billy said. He meant New York or Washington.

“Here,” Lila said. “The girls will be so pleased.”

“Then they do so from a distance,” he said, “and wholly without effect.”

From We Shall Not All Sleep.  Used with permission of Bloomsbury USA. Copyright © 2017 by Estep Nagy.

On My High School Obsession with UFOs 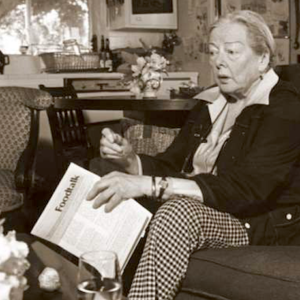 Lit Hub Daily: July 3, 2017 In honor of America's birthday: Quintessential American fiction, according to the rest of the world · On superheroes...
© LitHub
Back to top