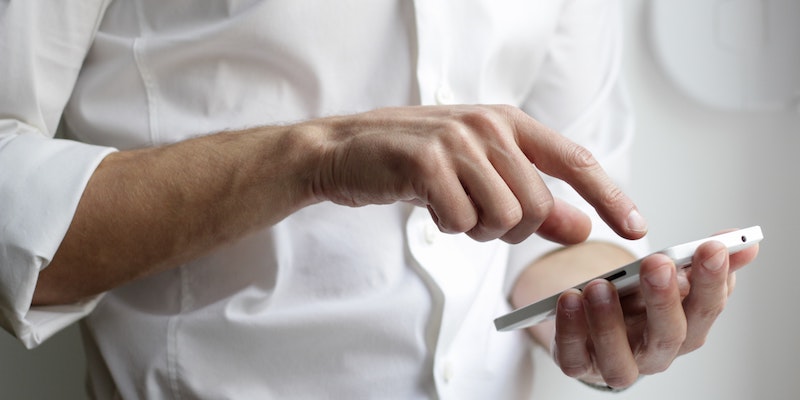 Jason Gay on the Evolution of Human Communication

There was a time in my life when I was excited to send and receive text messages. It’s true! This time actually happened. This was back when I was starting to date Bessie, the spec­tacular woman who would become my wife. How my heart would leap, leap, leap when a text from her would plinky-plink onto my $59 per month clamshell cellular telephone. Especially if the text was coming at an uncommon hour.

Words on a phone! At midnight? On a Thursday?

What would I write back? It was tantalizing, seductive. Who knew where this would lead!

If a marriage drains texting of suspense, then children suck the life out of the experience completely. Texting with Bessie is now a fact-based information exchange. She may as well be married to a bot with artificial intelligence.

Hello did you get the kids.

I got the kids.

We can’t help it. I’ll be having a perfectly dull, soul-sucking afternoon on my phone, reading a CNN story about a dog that escaped a mudslide only to get trapped in another mud­slide, when I’ll get this hot, hot, hot text from Bessie.

In ALL CAPS, for extra hotness.

These are not the sorts of texts a twenty-two-year-old re­ceives at 2:00 a.m. on a Friday in Miami. They don’t show texts like this on the glowing phones of principal characters in episodes of prestige dramas. On TV, characters get texts from people who want to have illicit affairs, or hide a body, or both. They are not texted to get more ointment—without any clarification of why they need to get more ointment.

Still, at a certain point, in any marriage, you stop asking questions.

OK, I’ll get the ointment

Then, a moment later, a ping:

Remember: ointment, not gel. Last time you got gel. Get the ointment.

Did Zelda and F. Scott Fitzgerald write such colorful love notes to each other? Or is this more like the sultry exchanges of Henry Miller and Anaïs Nin? Did Wallis Simpson offer comparable paeans to the Duke of Windsor?

At least the ointment message was coherent, correct. Once, in a hurry, Bessie accidentally texted me this:

It arrived matter-of-factly on my phone, and there was a ninety-second gap in which I was completely stunned. I’d just seen my dad! We’d played tennis. He seemed good.

To this day, I’m still not sure I buy her explanation—that, in a rush, the phone simply corrected “called” to “died.” What phone autocorrects “called” to “died”? That seems like a rather insidious problem with the software, or a tremen­dous prank by my wife.

These days, Bessie and I keep it simple, unsexy:

Get wine
Got wine
Late
Still late
Late still. (Sorry!)
Jesse fell off a thyrsus and got stitches.
Fell off a tyrannosaurus.
Where is the car?
Pls respond. Where did you park car.
Found a mouse. Still alive.
Mouse ew.
Mouse dead.
I miss you Larry

Sorry. I miss you *already*

These communiqués are exquisitely banal. Other than the brief moment I considered Bessie was dating a stranger named Larry, they do not contain intrigue, or sensuality, or even anything remotely entertaining. If you string them to­gether, they form a kind of mundane bottom-scroll of your life, like what they run on the lower third of a shouty cable news talk show.

What makes me crazy about texting culture is how unnec­essary most of it is. Do we really need this information now? How much obligation is there to respond in prompt fash­ion? Also this: If we do need to deliver this information now, and get a response, isn’t there a better device, perfected after generations of use—a device called the telephone, which, as it turns out, is an even more efficient form of information delivery and conflict resolution?

Have you ever tried to have a meaningful argument with someone via text message? It’s like two people wres­tling in the snow—slow, plodding, basically a waste of time. Two people will fire texts back and forth for twenty minutes, when a ninety-second phone call can accomplish the same.

“Nobody talks on the phone anymore,” Bessie tells me. “Don’t be a weirdo.”

She’s right, of course. To answer the telephone in this day and age is to declare oneself an aristocrat, the kind of person who takes squash lessons on a weekday morning.

Everyone’s guilty. Everyone has friends who do not pick up calls. Maybe you are the friend. I am definitely the friend, sometimes. There are days when I would sooner fly to Aus­tralia and bake a wedding cake for a stranger than answer a telephone call.

Listening to a voicemail? Forget it. Especially now that phones have those little transcribers that transcribe a mes­sage with 15 percent accuracy:

Mellow Tim from hamster I want to know if your sticks are with Teddy.

Actual voicemail: “Hello, it’s Jim from the frame store. Your picture is ready.”

I have envisioned many times the painful way that I will die, and it is this: hanging off a ledge by my fingertips, a pack of rabid wolves closing in, as I try to call friends and family on the phone.

This appears to be the evolution of human communication—ruining one mode and moving on to trash the next.

There was a time, of course, when literate lovers wrote letters, by hand, capturing specific feelings in a specific mo­ment of time, and then sent them off, hopefully, for delivery, which might take weeks or months, until the letter arrived and was read by the addressed recipient, excitedly, like an event.

Have you ever tried to have a meaningful argument with someone via text message? It’s like two people wres­tling in the snow—slow, plodding, basically a waste of time.

I sound like I’m talking about cave people. Who sends letters anymore? I check the approval ratings for the French president more than I check the mailbox. When I actually re­ceive a letter, it seems like an accident. Often it is an accident—somebody’s grandmother, with the wrong address, and a five-dollar bill wedged inside. I bet in the past ten years, I have received somewhere between one and four letters from actual human beings. And 430,000 catalogs from J.Crew.

We’re getting just as bad about email. Email seemed like an optimal way to communicate—you said what you said without interruption, sent it off quickly, and then waited to get an accelerated response. Remember how our computers used to throw excited tantrums when we received an email? It would literally scream across the room.

Now, email is a stuffy relic, something that old people do, like golf or saving money. After years of recidivist on­line shopping, our email in-boxes are polluted by a deluge of junk mail, quack medicine, or worst of all, political news­letters. It’s to the point that everyone’s in-box looks a little like an abandoned gas station, weeds poking out from be­hind the cracks, with diets, travel offers, insurance policy updates, and, of course, another J. Crew sale.

I keep hearing we are on the verge of a postword socie­ty, that no one consumes the written language at any great volume anymore, that the average American now reads 140 Bella Hadid Instagram posts and one-quarter of one book per year, and that’s basically it.

I feel we’re already there. A flurry of emojis is starting to feel like reading Dostoyevsky.

The sturdiest text thread I’m on is with a scattering of col­lege friends—all of whom are men with their own lives and families and responsibilities, and yet they still find time, at least seven hundred times a day, to make glancing references to stupid things we did in college decades ago. Perhaps you are on one of these threads too. Ours contains an extraordi­nary amount of complaining about the New York Knicks.

In the pandemic, this group text thread took a decid­edly human turn. The dad jokes dissipated, and the text thread became something more immediate, a soundtrack of quarantined anxiety and yearning for interaction. Friends got infected, locked down, and recovered, but the effects lingered. There have been moments when I wish it would return to Knicks gags and reminiscences about college bars that no longer exist, but I’ve found the turn to realness com­forting. It’s been healthy to wash away the glib and replace it with something human.

We are adults, sharing feelings! I’m grateful for it. I plan to tell everyone on this text thread how much I appreciate them, in a handwritten letter I will write to each. I’m going to start sending love letters to Bessie. After I send this text. And pick up that gel. I mean ointment. 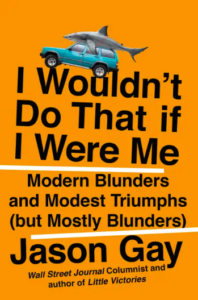 Excerpted from I Wouldn’t Do That If I Were Me: Modern Blunders and Modest Triumphs (but Mostly Blunders) by Jason Gay. Copyright © 2022. Available from Hachette Books, an imprint of Hachette Book Group, Inc.

Jason Gay is a humor and sports columnist for the Wall Street Journal, where his work has been honored by organizations including the Deadline Club, the New York Press Club, and the Society of Professional Journalists, the latter of which named him Sports Columnist of the Year in 2016 and 2020. He is the author of the 2015 New York Times bestseller Little Victories and a finalist for the 2015 Thurber Prize in American humor. Gay’s work has appeared in such magazines as Vogue, Rolling Stone, GQ, Harper’s Bazaar, and Outside. He served as Regis Philbin’s co-host on the Fox Sports Channel’s sports show The Crowd Goes Wild, and he is a regular guest on The Bill Simmons Podcast. He lives in Brooklyn, New York, with his family. I Wouldn't Do That if I Were Me is his latest book. 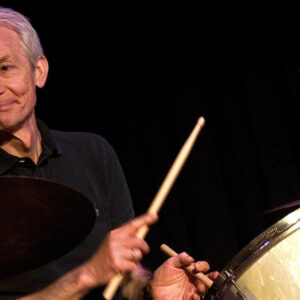