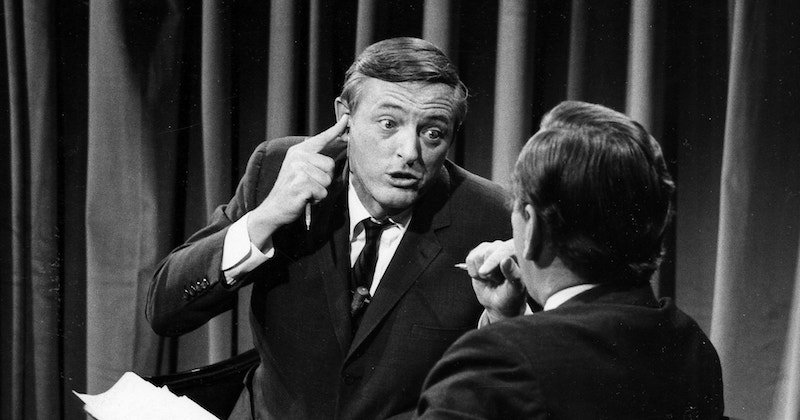 On this day in 2008, in an interview with The New York Times, when asked to comment on conservative commentator William F. Buckley, Jr.’s passing, the legendary Gore Vidal said that “hell is bound to be a livelier place, as he joins forever those whom he served in life, applauding their prejudices and fanning their hatred.”

Ouch. Of course, Vidal was known for his witty insults, even when his friends were the targets—but this one has more bite to it, as it follows years of impassioned political rivalry. It started in 1968, when ABC News sought to boost their flagging ratings through flashy programming; they hired Vidal, a leftist provocateur, to regularly debate Buckley, founder and editor of National review and host of “Firing Line.”

The debates were filled with ad-hominem style as well as substance. Vidal told Buckley that he inspired Vidal’s character Myra Breckinridge—“passionate and irrelevant”. Buckley revealed a note from the newly deceased Robert F. Kennedy suggesting Vidal be deported to Vietnam; Vidal, looking at the upward-slanted handwriting, called it a “sign of a manic-depressive.” In the below clip, Vidal called Buckley Jr. a “crypto-Nazi”; Buckley called Vidal a “queer “and threatened to “sock [him] in the goddamn face”.

Watching the clip, it’s easy to see it as a precursor to panel shows, now a staple of political television; there are also flickers of the sensationalism of more recent election cycles. But it’s also a pleasant throwback, to when intellectuals were able to get together and debate on television and the network simply televised it—as opposed to the siloed, distorted media of today.