Welcome to the second installment of Copper Canyon Press’s weekly series of free livestreaming book launch readings in the month of April. The Launch Party Livestream series will introduce you to twelve brilliant new and forthcoming poetry collections—three Thursday readings, plus our Tuesday finale, beamed right to you at home. This event features Traci Brimhall, Leila Chatti, and John Freeman (check out episode one, here).

Traci Brimhall
Known for her frequent marriage of the ordinary with the surreal, Traci Brimhall is the author of Come the Slumberless to the Land of Nod, and three previous collections of poetry: Saudade (Copper Canyon Press); Our Lady of the Ruins, selected by Carolyn Forché for the 2011 Barnard Women Poets Prize; and Rookery, selected by Michelle Boisseau for the 2009 Crab Orchard Series in Poetry First Book Award and finalist for the ForeWord Book of the Year Award. Her work has been featured in The Best American Poetry, and she has received numerous fellowships, including a 2013 National Endowment for the Arts Literature Fellowship in Poetry, the 2012 Summer Poet in Residence at the University of Mississippi, and scholarships and fellowships to the Breadloaf and Sewanee Writers’ Conferences. She holds degrees from Florida State University (BA), Sarah Lawrence College (MFA), and Western Michigan University (PhD), and is currently an Associate Professor of Creative Writing at Kansas State University.

Leila Chatti
Leila Chatti is a Tunisian-American poet and author of Deluge, forthcoming from Copper Canyon Press in 2020, and the chapbooks Ebb (Akashic Books, 2018) and Tunsiya/Amrikiya, the 2017 Editors’ Selection from Bull City Press. She is the recipient of a Barbara Deming Memorial Fund grant, scholarships from the Tin House Writers’ Workshop, The Frost Place, and the Key West Literary Seminar, and fellowships from the Fine Arts Work Center in Provincetown, the Wisconsin Institute for Creative Writing, the Helene Wurlitzer Foundation of New Mexico, and Cleveland State University, where she is the inaugural Anisfield-Wolf Fellow in Writing & Publishing. Her poems appear in Ploughshares, Tin House, The American Poetry Review, and elsewhere.

John Freeman
John Freeman is the editor of Freeman’s, a literary biannual of new writing, and executive editor of Literary Hub. His books include How to Read a Novelist and Dictionary of the Undoing (forthcoming), as well as a trilogy of anthologies about inequality, including Tales of Two Americas: Stories of Inequality in a Divided Nation, and Tales of Two Planets (forthcoming), which features storytellers from around the globe on the climate crisis. Maps, his debut collection of poems, was published in 2017. His work has been translated into more than twenty languages and has appeared in The New Yorker, The Paris Review, and The New York Times. He is the former editor of Granta and is a Writer in Residence at New York University. His latest is The Park. 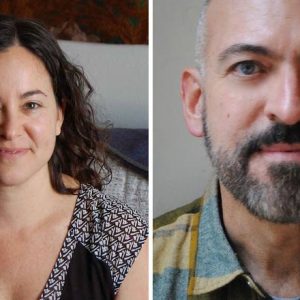 On this episode of Rekindled, Lisa Olstein is in conversation with Paul Lisicky. Olstein's recently released memoir, Pain...
© LitHub
Back to top