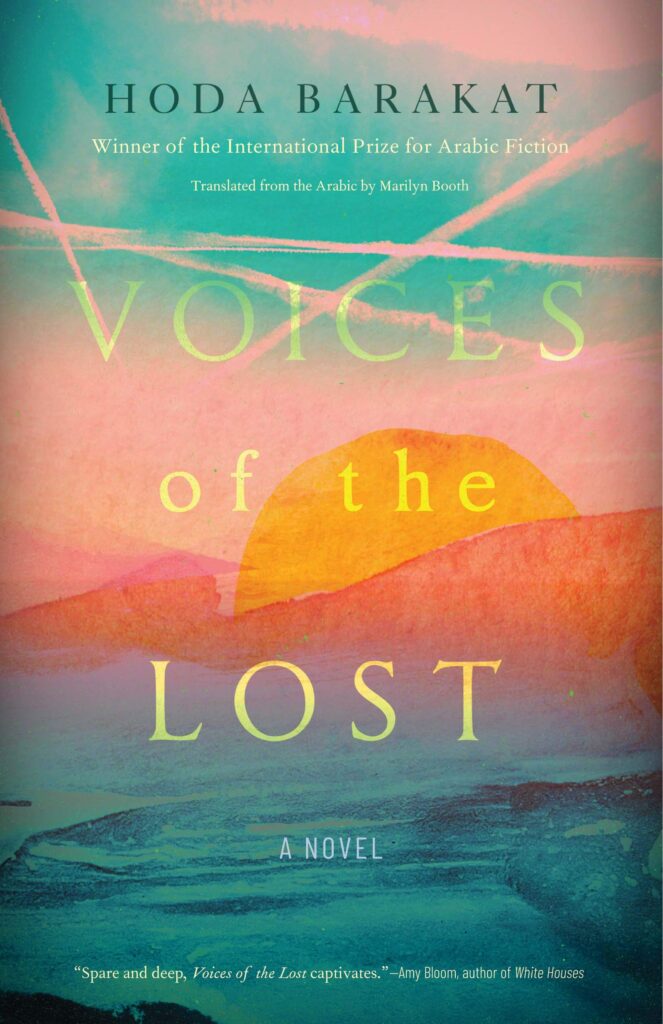 The following is excerpted from Hoda Barakat's novel, Voices of the Lost, translated by Marilyn Booth. Barakat has published five novels and two plays. In 2015, she was shortlisted for the Man Booker International Prize. She currently lives in Paris. Booth (translator) is professor of Arabic languages and literature at Magdalen College, Oxford.

It’s because drowsiness is always hovering, ready to pounce… Or let’s just say it’s sleep’s tyranny. I’ve never been much good at waiting for anything without nodding off, but here, for some reason, I haven’t had to work at resisting sleep. The doziness I can never normally shake from my head and limbs hasn’t come over me here, even though in this room I can’t find anything stimulating to keep me pleasantly occupied. All I can do is to go on taking stock of the room’s contents, sizing up the furnishings one by one as if they have some significance, as if every object will yield a grand meaning. When a person has nothing to do, when you’re just floating in a void, you can’t help trying to attach meanings to the objects around you, to find some connection with them. As if I can retrieve some memory of them, as if I’m already familiar with them, like they have some sort of place in my life or tell a story I already know. I’ve told myself, for instance, that the knob on the wardrobe door looks like the one I remember seeing in my aunt’s home, in the old flat, the one she left during the war.

I stare at the wardrobe’s double doors, following the patterns of the wood grain until my eyes are watering. Then I shift my attention to the drawer in the little bedside table, indecisive about whether to open it or not. I already know what is inside: a Bible, its pages thin and delicate, like you find in every hotel room in Europe, and an old telephone directory that no one uses any longer, and hasn’t for a long time. The hotel cleaners must have forgotten about it.

How many of those who’ve stayed in this room have spent as much time as I have contemplating every one of its objects? Apart from whoever it was who left the letter inserted between the pages of the hotel directory. And that directory is surely not something most guests would open. In the first place, there’s no need for a directory in a hotel as small as this. No need for it in any hotel, in fact, now that people have smartphones. It must be the owners’ attempt at giving their hotel a veneer of luxury, a touch of the dignity of age. The directory looks old, its pages slightly crumpled and eaten away. Neglected and forgotten here, like the Bible.

The letter I found inside the hotel directory perplexed me. It worried me, actually. It talks about a young man, the letter writer himself. He wrote it in a cheaply rented furnished room in a street nearby, a rather run-down one, it seems. So how did the letter get here? Plus, it comes to an abrupt stop: it doesn’t really end. All in all, because of this letter, I’m feeling very uneasy about the writer. It’s not hard to imagine that he’s in prison, for instance. The letter has it that he was full of terrible imaginings about the secret police from his country of origin mounting surveillance on him. So it looks like he went to talk to their man, and it must have ended very badly, and that’s why he couldn’t finish his letter. The letter is written to the woman he loves but she… I’m convinced that it was this woman who hid the letter, to prevent anyone who might have been looking into his activities from coming across it. Because, among other things, this writer confessed that he was living in this city illegally, and that he was taking drugs – things that could get him in trouble with the law. That woman might be why the letter landed in this hotel room, though I can’t fathom how it happened, not exactly. And then probably she forgot about it, or maybe she hid it and then couldn’t recall where she had put it. Whatever happened, the man never did return to the letter he had started. This might mean that his meeting with the man from the secret police – or the man he imagined was from the secret police – ended in some calamity. Maybe even a tragedy.

It’s possible, instead, that it was the man from the secret police who took this room, in order to carry out surveillance on the young man who wrote the letter. And it was he who found the letter – that is, if he went to the fellow’s flat searching for documents or papers – but then he forgot and left it behind here, perhaps because, in the end, it wasn’t of much interest to him.

It’s all this empty time, nothing to do. Idleness, the master of silly imaginings, stoking the explanations one comes up with for things.

Reading that letter, though, I could almost hear his voice. I could almost see that lonely, miserable, wounded man standing at his window, looking out at the emptiness of the night, alone without her – I mean, without that woman he loves, or who he won’t…

The letter sounded like a goodbye letter, it really did. But who knows if he ever meant to send it, since he didn’t finish writing it.

I’m more inclined to think it was the man from the secret police who got hold of the letter and hid it here, but then misplaced or forgot it. I mean right here in this hotel room, which does in fact overlook an area that must have a pretty bad name – all these dilapidated buildings bulging with furnished flats.

Why am I telling you all this? To entertain myself a little while I’m waiting, and also because the loneliness of that man, the letter writer, sounds a lot like my loneliness. Even if his story doesn’t resemble my life in any way. But I sensed, I felt, his cry of pain as though I were an old friend, or as though I myself was the woman to whom he was complaining. Maybe I felt that way because after reading his letter, there were things I thought about telling him, things I wished I could say to him, and because I wanted so much to wrap my arms around him.

This is so strange. Especially because I didn’t like her at all, that woman. If I were ever to meet her – which is a ridiculous thought, of course – I would give her a piece of my mind. I can even see myself accusing her of stealing the letter and concealing it here, so that it would be inaccessible to anyone searching her home, since possibly it was she who killed the letter writer and not the man from the secret police. Or maybe it was her husband. Hmmm. He discovered their relationship and sent a hired killer. The murdered man believed this fellow was an agent of the secret police from his own country.

Yes, true enough, I’m hopeless. I’m always like this, swinging easily between my fertile imagination – the fantasies I construct, that is – and the reality of things, without giving much thought to what I’m doing. I’m always mixing up what happens in my head with what happens in the real world, but that doesn’t worry me particularly. Actually, it keeps me amused. It’s like having a dream at night and then being completely immersed in the details of it for the whole of the next day, and maybe longer. A friend who died some time ago might return to me in a dream, and then for days his presence goes on comforting me. It’s not that I’m getting mixed up about whether he’s alive or dead. I mean, I haven’t forgotten that he did die. It’s just that he seems to be with me, and that gives me comfort even though I’m well aware that ‘comfort’ might not be the most appropriate thing to feel, since the situation really calls for feelings of loss and grief – after all, I do know perfectly well that he’s dead. It’s as if he has come to visit me because I missed him, or perhaps because he was missing me. He comes to visit me, but free now of the things that were so painful to me before, the images I had of each stage of decomposition as his body lay in the grave – swelling flesh, worms laying eggs, things like that.

It’s just that I started writing to you as a way to fill up the time while I’m waiting. I don’t have any idea what people find to do when they have to wait.

What I would have told you, if you were here, is this: I am not someone who waits. I mean, never, not even at the dentist’s. Or what I mean is, when I’ve got to wait, I go to sleep. I have a really good nap. I wasn’t like this before. If someone was late for an appointment we’d made, I would have no patience at all. I would be on edge, livid in fact, and I would stack up all the angry rebukes I could think of in my head. For a while now, though, I’ve been forgetting who it is I’m waiting for, and why I am waiting for whoever it is I am waiting for, and then my eyelids start feeling heavy. If I am waiting in a café, my head drops between my shoulders and I slump down in the chair, spreading my bag across my lap like a little blanket, and I go to sleep. It’s not deep slumber, not like the way one sleeps at night. It’s more like retiring into a dark interior space where the day outside disappears completely, or like the soporific state one is in after drinking heavily.

Yes…once you’re here, I will be as chatty as I can, trying to entertain you, and also because you will ask me whether I got bored waiting for you. You’ll ask because you’ll be feeling a bit rattled, and a little apologetic, about being late. ‘It was the snowstorms,’ you’ll say. Because what words will you find to say, anyway, when you enter this room and you look at me, and then you see me, like this, just me, all alone? I’m a lot older now. I’m old and I’m not like I was. I mean, after all these years. What I would have been trying to think about, waiting for you, was what to say first. What to start with and how to say it.

Excerpted from Voices of the Lost by Hoda Barakat, translated by Marilyn Booth. Excerpted with the permission of Yale University Press.

Mustafa Akyol on the Islamic Enlightenment

In Praise of the Graceless Literary Exit: A Reading List 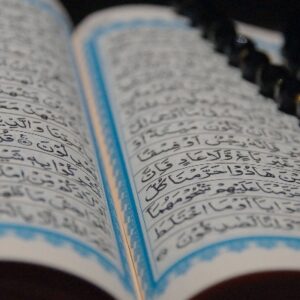 Mustafa Akyol on the Islamic Enlightenment Hosted by Andrew Keen, Keen On features conversations with some of the world’s leading thinkers and writers about the economic,...
© LitHub
Back to top