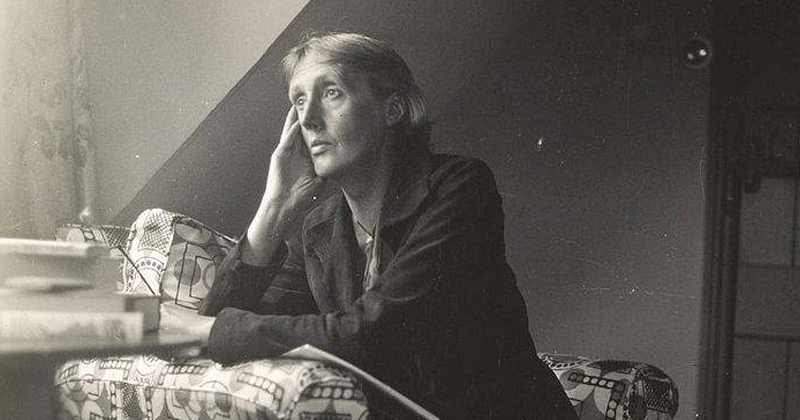 Virginia Woolf’s writing room (of her own) was actually . . . quite filthy.

Virginia Woolf is famous, among other things, for declaring that “a woman must have money and a room of her own if she is to write fiction.” But did you know that Woolf’s own room for writing fiction was a total mess? (I didn’t either, but it’s true.) In Leonard Woolf’s autobiography, he describes his wife’s writing space:

With regard to her writing, Virginia certainly never learned to practice equanimity. Like most professional writers, if she was well, she went into her room and sat down to write her novel with the daily regularity of a stockbroker who commutes every day between his house in the suburbs and his office in the neighborhood of Throgmorton Street. Her room was very different from a stockbroker’s office. She was an untidy writer, indeed an untidy liver, an accumulator of what Lytton Strachey used to call “filth packets,” those packets of old nibs, bits of string, used matches, rusty paper clips, crumpled envelopes, broken cigarette holders, etc., which accumulate malignantly on some people’s tables and mantelpieces.

In Virginia’s workroom there was always a very large, solid, plain wooden table covered with filth packets, papers, letters, manuscripts, and large bottles of ink. She very rarely sat at this table, certainly never when she was writing a novel in the morning. To write her novel of a morning she sat in a very low armchair, which always appear to be suffering from prolapsus uteri; on her knees was a large board made of plywood which had an inkstand glued to it, and on the board was a large quarto notebook of plain paper which she had bound up for her and covered herself in (usually) some gaily-colored paper. The first draft of all of her novels was written in one of these notebooks with pen and ink in the mornings . . .

Her room tended to become not merely untidy but squalid. She reached the final stage of organized disorganization and discomfort when we moved from Richmond to 52 Tavistock Square in Bloomsbury. At the back of the house was what had once been an immense billiard room. We used it as a storeroom for the Hogarth Press and there embedded among the pyramids and mountains of parcels, books, and brown paper sat Virginia with her disemboweled chair, her table, and her gas fire.

Well, after all, a messy desk is supposed to be a sign of genius . . . so long live the filth packet, I say.