Andrew Keen, in Conversation with the Author of Magic and Loss

Virginia Heffernan’s new book Magic and Loss isn’t shy about its significance. “Just as Susan Sontag did for photography and Marshall McLuhan did for television, Virginia Heffernan illuminates the logic, aesthetics and mysteries of the Internet,” its jacket claims. And the early reviews have been positive, the New York Times, for example, describing it as “an enjoyable snapshot” which “embraces the Internet as a work in progress.”

So I emailed Heffernan to see if she wanted to chat about the book.

“Very, let’s start!” she emailed back within twenty seconds (as if she’d been expecting my invitation).

That’s the magic of our Internet age.

Andrew Keen: So you’ve written this impassioned defense of Internet culture—of online music, design, video and, above all, writing. But why write a conventional text about it? Shouldn’t you have posted your thoughts on Medium, Instagram or YouTube? Why the book? Why an old medium for a new message?

Virginia Heffernan: Magic and Loss, while it aims to temper anxiety about the Internet, is not a defense of anything. In showing that the Internet is art, I don’t argue that it’s utopia—far from it. Our online civilization contains agony and ecstasy, magic and loss. I chose to publish this book on a distribution schedule that, in 2016, is more improvised than traditional. I published some material in print and online first, tested out ideas in person at podiums and in classrooms, shared a document in the Cloud with my editors, edited and fact-checked from a PDF, published excerpts and videos and images on social media, and now have released an e-book, an MP3 audiobook and a three-dimensional book in online and ordinary bookstores. Publication now involves a radical hybrid of analog and digital media. I love e-books and audiobooks, as well as ordinary books, but this is only my second time out, so it’s still exciting to see a box of my own hardcover books I can give to family and friends! I might have missed that excitement if I’d gone digital-only—I’m not sure. You never know when the pangs of loss, brought on by the meteor-hit of digitization, might kick in.

AK: Yes, I was particularly taken with the agony and loss in Magic and Loss. It’s an intimate and sometimes painful confessional of your earlier life. I was struck by the nostalgia permeating much of the book. Digital technology—especially its discovery as an adolescent—seems to have shaped your life. Jaron Lanier wrote that he was “nostalgic” for the future. When you write about the Internet, are you writing about the past or the future?

VH: Oh for sure—I miss the gargantuan, sighing mainframe computer I used in the early 80s. But I wouldn’t call that pain. I miss it no more than I miss the snowbanks or swing sets of my childhood; it was good, then it was gone. Later I felt this way about the Blackberry and Limewire—interesting installments in tech and personal history, but ephemeral. Is the book about the past or the future? Both. The accounts in the book of the lived experience of the Internet—some fond, some not—are intended to light the way to its future. How you come to a new civilization determines how you experience it, and how you chart a course for it. Imagine how different ancient Rome must have seemed when approached by a senator or a slave. The book demonstrates that billions of us come to the Internet not as an engineering experiment or a machine or war or capitalism—which is how too many analyses represent the Internet—but as an extension of our humanity, and particularly of human philosophy, literature, religion, art, music, history and language.

AK: Your “aim,” you write in the book, is “to build a complete aesthetics—and poetics—of the Internet.” Is this another way of saying that you wanted to write about the Internet as “an extension of our humanity”?

VH: It is, precisely.

AK: You say that this is a “new aesthetics” which requires a “new brand of intellectual courage”  to envision a “new symbolic order.” What is so new about the Internet?

VH: Speed and expansiveness, to start. On expanse: The population of our ether—users of cell tech and wifi—is now just about coextensive with the population of the earth. This is fathomless by most minds. And speed: The illusion of near-absolute compression of time and space on the Internet is an illusion so beguiling we are virtually powerless to refuse it as real, except for short periods and with great mental or spiritual focus. So all of human existence can seem to happen in one point in space and at one millisecond—that is hard on minds trained to perceive space and time and see them as natural categories.

It’s been challenging also for some of us to recognize the Internet as a thoroughly polyglot and polymath civilization, dense with speakers and readers of pictographic Asian languages, as well as every other language on earth. No wonder we have collectively had to create a new shared symbolic order—apps; design; emoji; languageless video of sports, music, nature, violence, sex, physical comedy and inspiration; and of course the language so cryptic it is even CALLED code. These two qualities on online life—expanse and velocity—are just part of the demands the Internet makes on our sensory-emotional lives, our lives as artists. We are finding, again as the artists of images, words and sounds that we’ve all been forced to become, new ways to grapple with those exigencies, to represent, honor and subvert them.

AK: So let’s come back to where we started—with you as an author. Reading Magic and Loss was—for me, at least—a “sensory-emotional” experience. At its best, the book contained the finest qualities of the Internet—what you call its “hallucinatory splendor.” How has the Internet transformed you as a writer/artist?

VH: I spent hours turning over this question. I know that as a budding writer—as a kid, I guess—I was drawn to very short-form stuff and wordgames. Tightly formal poetry, magic squares, Scrabble, word puzzles, writing without this or that vowel. Later I wrote comedy, also in a tight form. But as a reader, I have always loved realist fiction. That wasn’t always great. Good students in the 70s and 80s were supposed to read The Hobbit and Madeleine L’Engle. I wanted to read S.E. Hinton, the “Can This Marriage Be Saved?” column in Ladies Home Journal, and books about teens with alcoholic mothers.

As I started writing for a living, I found I could write poetry or essays but not fiction. I once tried a short story, and it went like this: “A young woman wearing a light-blue shirtdress sat down on the sofa and began to think about some topics. What she thought was, ‘…” and then it became an essay! Writers like George Eliot and Marilynne Robinson who fold essays into fiction are my favorites. I aim one day to try that. My style was also highly influenced by disparate idioms from the Internet, pop culture, TV, Camille Paglia, poets like Louise Bogan, and theorists like Derrida and Richard Rorty. The New York Times sometimes cited me for academic jargon, while I remember a note on a paper I wrote in graduate school: “The pleasures of your writing tend to null out deeper levels of analysis.” I felt like a one-woman tower of Babel.

But the Internet liberated me to be that polyglot (that “gleeful trickster,” as the Times calls me?) in a way the academy and traditional journalism never did. Writing for Slate in 1998 I described Rosie O’Donnell as having a “doublewide face.” Instantly commenters recognized I was in an idiom set that I’d have to answer to. A hundred readers must have parsed the class overtones and size-ism of that statement. It was exegetical fire like I had never seen around the seminar table. Having pressure put on your vocabulary like that can be exhausting but it’s also invigorating. Being subject to that pressure for decades upon decades online—do you know that among Korean guitarists/hackers/African-Americans what you wrote means XYZ? Or that what you’re trying to describe is XYZ!—has heightened the vivacity and power of my writing immeasurably. My idiom, my vocabulary has exposed itself to so many symbolic microbes online; I think it has a robust immune system by now.

Named as one of the "100 Most Connected Men" by GQ magazine, Andrew Keen is amongst the world's best known and controversial commentators on the digital revolution. He has written five books including the best-selling Cult of the Amateur, The Internet Is Not The Answer and How To Fix The Future. He directed and wrote the 2020 movie How To Fix Democracy and is the host of the popular podcast show Keen On Capitalism. Current interests include the future of work, the future of the earth and the future of humanity. He is executive director of the Silicon Valley innovation salon FutureCast, the host of the popular Internet chat show Keen On, a Senior Fellow at CALinnovates, a columnist for CNN and a much acclaimed public speaker around the world.

5 Important Works of Eco-Fiction You Need to Read 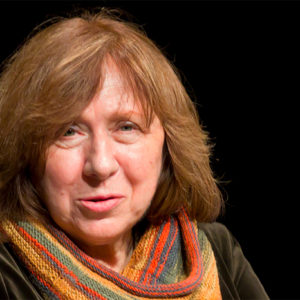 In 2015, the Nobel Prize in Literature was awarded to Belarusian Svetlana Alexievich "for her polyphonic writings, a monument...
© LitHub
Back to top