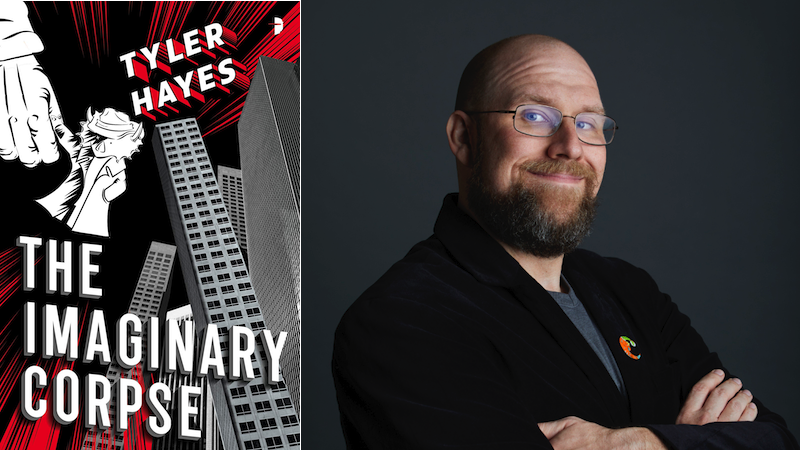 Tyler Hayes’ The Imaginary Corpse offers an escape from the unending stress of the Covid-19 pandemic with three simple words: plush yellow triceratops.

Nothing could be farther from our collective coronavirus nightmare than the Stillreal, where Hayes’ protagonist, Tippy (the aforementioned triceratops), runs the Stuffed Animal Detective Agency. Which is not to say that the book doesn’t have its own nightmares or traumas; they’re just softened by the fact that all the characters are imaginary friends created by people (“actual people, out there in the real world,” as Tippy explains). The Imaginary Corpse is a mashup of fairytale, comic book, noir and science fiction, making it thoroughly unclassifiable.

“I set out from the beginning knowing this was a book for adults,” Hayes tells Rob Wolf on New Books in Science Fiction. And yet it’s a noir with soft edges. “The choice to make the book kind was one of my biggest driving goals… This is a kinder world than a lot of fictional worlds, than often our world is. I stuck hard on that, on the idea of community, the idea of compassion, the idea of empathizing and accepting people where they are.”

Robert Wolf: The Imaginary Corpse is a detective story and plays with a lot of the tropes of the genre. But it’s also like no detective story I’ve ever encountered. Why don’t you tell our listeners about it?

Tyler Hayes: It’s deliberately playing with a lot of noir and hardboiled tropes but filtered through a very whimsical kind of—child-like is the wrong word—but a very whimsical, very emotionally raw lens. Something I consciously did when I was writing this was I wanted to reject the nihilism at the heart of hardboiled and noir, the whole “forget it Jake, it’s Chinatown” kind of attitude that says you can’t actually beat the status quo, that the man will always reassert his dominance over the people. I really worked to make it a much more hopeful book, a book where the detective is not mired in his own moral failings, a book where at the end he has actually made things better.

RW: Tell listeners a little bit about your protagonist, Tippy. As you point out, he’s very different from the typical noir detective.

TH: Tippy is a plush yellow triceratops, who is also a detective. He came to life as a little girl’s imaginary friend, and one of the conceits of the book is that if an idea is invested with enough love and enough need and enough importance by the person who thinks it up, it can become real—not literally manifest in our world, but it is invested with a life beyond its creator.

Tippy is one of those. He was so important to the little girl who dreamed him up that he gained this greater amount of substance, this “capital R” Real quality. And he is also a victim of trauma, as is the little girl who birthed him. They both went through a terrible trauma … and Tippy ended up in the Stillreal, this sort of alternate dimension, the kind of underbelly of the imagination, where ideas that have become real but that their creators don’t cling to anymore for one reason or another end up to live out their existences.

RW: Was it hard to get it published? I’m curious because it’s a unique story that maybe doesn’t fit so neatly in the slots that publishing often likes to place things.

TH: As befits this kind of odd book, it has kind of an odd journey. I was querying it the normal way, and I was getting basically a lot of rejections that were, “So this is great, but I don’t know where I’d sell this. So I am not the right person to represent you.” In the middle of all that, Angry Robot Books had their yearly opendoor submission period where they would take on unagented, unsolicited manuscripts, and I went, “Well, it can’t hurt,” and I threw the manuscript to Angry Robot. And I went on with my agent hunt and again kept getting almost there and being told I don’t know where I’d put this. And then one day I got the email from Angry Robot saying we absolutely loved this book. We want you for our summer 2019 list. Here is your offer letter and please feel free to go get an agent to negotiate this for you. And so once I finished running around in a circle and screaming, because “Oh my God, it happened,” I contacted the agents that I had that had not yet rejected me, and one of them wound up giving me an offer.

Guiding Me Back to My Caribbean Roots: Remembering Novelist Andrea Levy 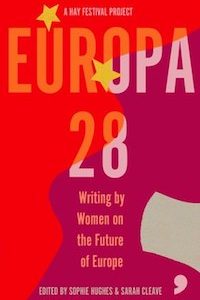 The first hummingbird lived in Europe over 30 million years ago. Its colors were bright and bold, magnificent and stirring....
© LitHub
Back to top