By Raquel Salas Rivera and CAConrad

and break the slick
off the glass

you dip your face in icecream pools lap
up the cracks

when you see a mail truck and think

carcass holding in leagues
of carved out faces you imagine ghosts

every white question
every nice house with a.c. clean lawns sprinkled
dreams of buyé out in the open

until someone brings water

trapping mosquitoes against thighs
a sacrifice for night

i say soon we’ll be people again i promise

from wrist flicking out gesturing at
waterfalls pools

“900 Chocolate Hearts A Minute At The Candy Factory”
CAConrad

fashioned on tip of a fork

car horn at door to the birth canal

living section of dawn cooking inside the poet

no guarantee we will cohere in our broken patch of garden

when you look at me you see

mostly water who will

one day hasten to

a thing I know for

certain is to cook

food to taste and

eat a leaf with a hole

with a future butterfly

you believe in sharing

at least you used to

I know you want

to shock me with

gloryholes and I can

you yet I wonder if you

ever look up to the wall

thinking it will be his eyes 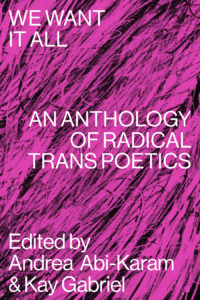 Excerpted from We Want It All: An Anthology of Radical Trans Poetics, edited by Andrea Abi-Karam and Kay Gabriel. Used with permission of Nightboat Books.

Raquel Salas Rivera is a Puerto Rican poet, translator, and editor. He is the author of five full-length poetry books, including, lo terciario/ the tertiary, which won the Lambda Literary Award for Transgender Poetry and was longlisted for the 2018 National Book Award; while they sleep (under the bed is another country), which was longlisted for the 2020 Pen America Open Book Award and was a finalist for CLMP’s 2020 Firecracker Award; and x/ex/exis, which won the inaugural Ambroggio Prize. His sixth book, antes que isla es volcán/before island is volcano, is an imaginative leap into Puerto Rico’s decolonial future and is forthcoming from Beacon Press in 2022. Alongside Raquel Albarrán and Val Arbonéis, he is editing the first anthology of Puerto Rican trans poetry, La piel del arrecife. He currently writes and teaches in Puerto Rico.
CAConrad is the author of the forthcoming book Amanda Paradise (Wave Books, 2021). Their book While Standing in Line for Death won a 2018 Lambda Book Award. They also received a 2019 Creative Capital grant and a Pew Arts and Heritage Foundation Fellowship, the Believer Magazine Book Award, and the Gil Ott Book Award. They regularly teach at Columbia University in New York City and Sandberg Art Institute in Amsterdam. Please view their books, essays, recordings, and the documentary The Book of Conrad (Delinquent Films) online at http://bit.ly/88CAConrad 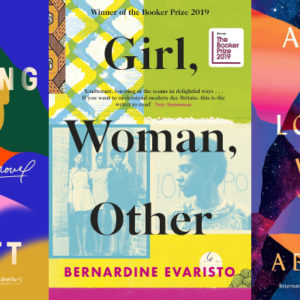 Announcing Reading Women’s 2020 Fiction Award Shortlist In this episode of Reading Women, the full team—Kendra, Jaclyn, Sachi, and Sumaiyya—is here to reveal the shortlist for the 2020...
© LitHub
Back to top
Loading Comments...