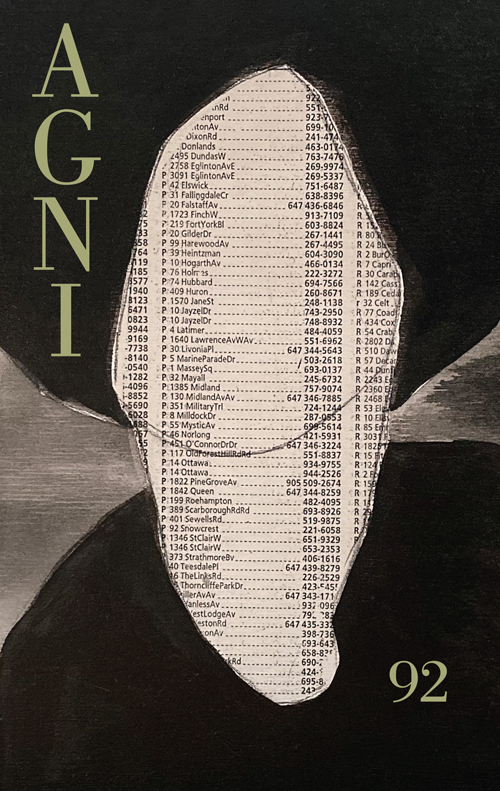 The following is an excerpt of Kirstin Allio's short story, "Double-Check for Sleeping Children," which is featured in AGNI's latest issue. Allio is the author of Clothed, Female Figure, and Garner, which was a finalist for the LA Times Book Prize for first fiction. Her honors include the National Book Foundation's 5 Under 35 Award and a PEN/O. Henry Prize. She lives in Providence, Rhode Island.

Down the bank on her belly, to where the stream widened and stalled into a pool. Her mother said that was the way baby bears went, and she liked to feel the heaves and rocks with her whole skin and bones.

Where the hell did you come from? said a voice.

She pointed up the bank before she located him, full camo, half tree—

Well, come on down, he said reasonably. She slipped the rest of the way.

Are you my father? she asked.

He laughed. You ain’t got one of your own?

He added after a while,You ask your ma about it?

When she didn’t answer, the fisherman looked up through the bare trees to find his laugh again. Got me a granddaughter.

Now she tried to contain her voice to hide her eagerness to know, How old would that be?

All right. They were getting to know each other and he handed her the rod.

You’re a natural, he said, admiring the way she took hold.

He stepped back a good way to let her get a feel, and that was lucky, she thought, because all at once the rod came alive. She felt a tug down deep to her source, it was like the stream was inside.

From far away she heard him,You lady luck, little girl?

She knew what she was. She closed her eyes. But then he was behind her, heavy and strong, knocking the magic pole away. Her eyes flew open and he caught her midair—

The fish was already going still between his hands.

She had the sense to scatter in a different direction from the one that had brought her to the stream. That fisherman with his face twitching like last fall’s beech leaves would never know where she and her mother stayed. They made a brush bed in darkness that cats have golden eyes for, that deer have rabbit’s-foot-for-luck tails for. Her mother put her nose in Hannah’s hair at night and Hannah held still as if she were her mother’s prey. Her mother said,You’re playing dead on me. later Hannah caught a whiff of sulfur shit from the hole her mother dug with her spade.

They were on the move. They were staying out of the way of a man. i’m speaking in code, comrade, said her mother, and her look grew both larger and blurrier by the fire.

Is he a fisherman? Hannah asked.

Why? Her mother seemed to contract inside her skin. Did you speak to someone? But Hannah had a feeling the fisherman wasn’t the one.

It was hot for early spring, and the bare, pronged woods were overexposed, said her mother ominously, extraterrestrial. Home, home on the range, her mother had a real singing voice, and she beat time out the window against the side of the car, so that the car was filled with wind,Where the deer and the antelope play. She doubled back on the same fragment of tune, Heading east out of Western Pa. They were on a long, straight section of road, when Hannah looked around behind them to see a river shimmering on their tail.

She had the sense to scatter in a different direction from the one that had brought her to the stream.

When the pioneers crossed the country in covered wagons, said her mother, squinting as if to conjure the indomitable line of a caravan, they had visions of lagoons, lakes, willow trees.

Hannah looked around again and reported back, Police cars. Her mother raised her eyes quickly to the mirror. She started to draw her arm in the window, then she put it back out again. She added, They were too stupid to ask the indians where the water was. and she gave her daughter the same wide, blank smile she gave at filling stations when she turned out her pockets, having already pumped a full tank of gas.

There was a well-kept double-wide with cars pulled up all over the lawn and filed along the side of the road. a flag flew from the mailbox, and Hannah’s mother slowed the car. as she pulled over Hannah saw her take in the not-so-distant crossroads.

Hannah leapt out and made for a life-size, white-furred bear with a wink in his remaining glass eye.When she remembered it later, the scene, and the things she chose—a stripy hula-hoop, a pair of pink plastic clogs, Nancy Drew with tidy calves and low heels, bearing a lantern against the opening of a sinister cave—she wondered how she knew it was a yard sale. it was strange the way you remembered surprise, but couldn’t quite replay your own innocence.

A tall girl with bangs in her eyes was picking her way toward them. a boy shot from behind the garage to gyrate at the edge of the yard as three police cars tooled by.

Hannah’s mother waved to the older girl. are you taking paper dollars here?

Valerie—Hannah would soon learn her name—looked confused, but curious. in a flash, Hannah saw her mother through Valerie’s eyes: rouged with road dirt, a braid the girth of her fist that Hannah herself had never seen undone. She stepped between them, but her mother was already engrossed, foraging in her blanket coat, its deep folds. Bowing like a foreign emissary in her thigh-high moccasins and holding forth a bill, she said, That should do the trick, comrade. She reached for Hannah’s shoulder, and then bowed again as if to excuse herself, Go on. and so Hannah set out after Valerie, across the terrain toward the kicked-open side door.

The house was dark and cool. Pretty women sat at the kitchen table smoking and drinking canned sodas, and they swiveled in a herd to see the girls.

Hi! cried Valerie’s mother. She was older than Hannah’s, but she had curly blond hair. Her whole chin smiled and she had big, friendly ears. Gentle eyes. as she touched Valerie’s old things with her polished shells, their worth multiplied.

How old are you? asked one of the women from the table, afloat in an off-the-shoulder ruffle, blowing smoke out of the way.

Before Hannah could answer, Valerie’s mother said, i bet you’re in first grade.

I’ve never been to school, said Hannah, and the women froze. i like your rabbits, she said, trying to find favor again. There were china animals in tea parties and parades, and the women all laughed and stubbed out their cigarettes and reached for their cans. Valerie’s mother was doing the math on the cover of the phonebook.

I’ll help you carry your stuff, said Valerie, and Hannah knew Valerie wanted to get another look at her mother’s curled lip, animal flinch, wild eyes.

Someone called, Come back soon!

Hannah’s arms barely reached around the polar bear. in the bright sun, she was momentarily blind. Valerie pranced off the asphalt to the lawn. Bare feet, she said. ow. Where’s your mom? She was looking around. Where’s your car? she said, surprised, setting the bags down.

Time lifts off here. Floats along before it finds ground again.

That was how Hannah was left the first time. in her mind’s eye, she saw the car burst free, her mother’s young but ravaged face hard against the windshield.

Time lifts off here. Floats along before it finds ground again.

Ten years passed, and when her mother returned, Hannah was almost sixteen. She didn’t want to leave her foster home, get back on the road. But her mother seemed overcome by the sight of her. Forgive me, she said, in a voice twisted and wrung out like a rag, lowering herself to one knee. 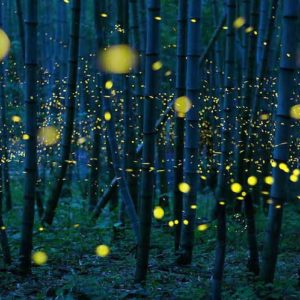 Two Poems from an Anthology of Radical Trans Poetics "soon we’ll be people again" Raquel Salas Rivera west philly summer 2018 so hot you want to shave your eyebrows group...
© LitHub
Back to top