"the mind lights up [...] / at the altruistic pleasure of building / shelters for the homeless or at easy / blowhard internet shaming of strangers"

What if our lives are an alien planet’s computer game?
Or what if we’re the dreams they have in another dimension?
Dana’s been doing a drug that has her
asking the questions a prophet would ask.
Or a six-year-old. All night, all night.

Will there come a day when the CEO convenes
the Board of Directors in the oak and leather Meeting Suite,
and clears his throat sententiously, and begins:
What if we measured our profits
in units of serotonin?

What if the cosmos we know were built of series of “strings”
and countless invisible “bubble-universes”? Right. What
if the utterances of our seers were the same
as the visions of the insane: and the pronouncements of the insane
were the same as the theories of astrophysicists?

What if the gods are walking us,
as we would dogs?
A crazy idea. Still. . .
how do we know that our free will isn’t
the length of a leash in a deity’s hand?

How a Single Violent Crime Tells the Story of U.S.-Japan Relations in Okinawa 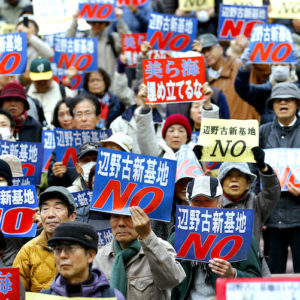 How a Single Violent Crime Tells the Story of U.S.-Japan Relations in Okinawa On the evening of April 28th, 2016, Rina Shimabukuro put on her red sneakers and black parka to go out for a walk. Twenty...
© LitHub
Back to top