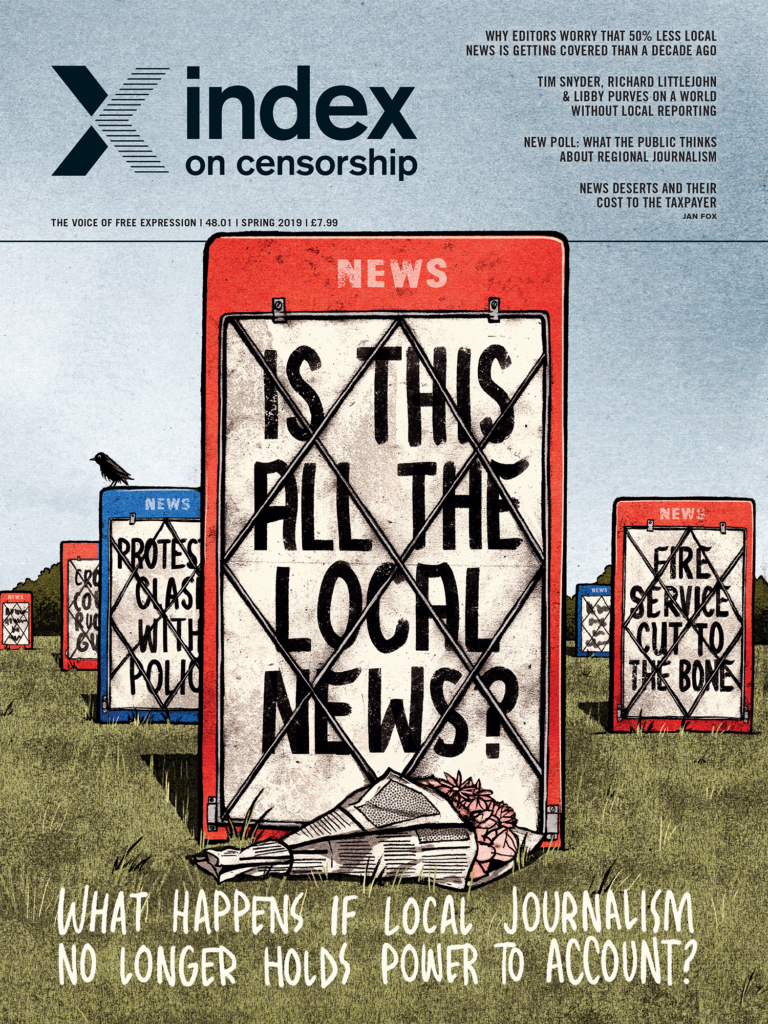 The following is from Michal Hvorecký's novel Troll, set in a world where the government controls the people by spewing out hate 24 hours a day. Michal Hvorecký is a Slovakian novelist and short story writer based in Bratislava. Troll was published in 2017 in Slovak. His books have been translated into 11 languages.

I am the most hated person on our local internet. Most people must have seen my mug by now. Crossed out or smeared with blood, my face is spreading on social media at a pace of ten thousand hates an hour. Not even the most hopeless football game or bruising defeat at hockey can stir up so much hatred. Not even our president and the prime minister. The winner of the Eurovision song contest who sang about some sad elephant in a jolly zoo is Miss Popularity compared to me. Opposition politicians and cabinet members are secretly grateful to me—at last people have channelled their hatred elsewhere.

Photos circulate on the net, attributing to me statements I’ve never made. But who would bother to check? Checking is something that used to be done at one time, a long, long time ago… In another galaxy. Checking is out. Retro, at best.

The dreadful photos are spreading like digital wildfire. Among those who will spot the awful shots on the net will be Sarah Lutz. I was the one who’d dug them out after she appealed for solidarity with refugees. Even a cult figure like Sarah has never faced so many adversaries at once.

Now I have an inkling of what she must have felt.

Teeth bared, I scream for millions more refugees. With a half-witted grin, I call for Islamic State to attack Vienna and Warsaw. Eyes wide with excitement, I demand that all citizens turn gay and lesbian and end up looking like Conchita Wurst.

Although I’ve spent most of my life on the internet, I’ve never seen so many emoticons. I tried to respond on message boards. I posted comments. I fired off emails. I publicly pledged to send their creators snapshots that would be even more horrible. But their understanding of humour was about the same as mine of their actions.

I checked out the profiles of the people attacking me. In addition to a passion for shaven heads, the politics of the Reich, US motorcycles and Chinese vests, they have all graduated from the university of life.

It was almost as if I’d told them what to write.

I put on a black balaclava and infiltrated the crowd that chanted my name, demanding a public execution. This wasn’t happening a hundred or five hundred years ago in some medieval marketplace or prison camp but in the main square of the metropolis where I was born and have lived all my life.

I wasn’t hallucinating. I was taking it all in with my senses sharpened. In the world around me facts didn’t matter. Genuine anarchy in the UK. In Europe. In the US.

I walked the streets casting furtive looks around. The city felt ghost-like. The streets were teeming with people.

I was desperately looking for her in the crowd. I hoped we could meet again. Everything would be explained.

My heart was pounding. I was paralysed by fear. Outraged voices screamed my name so loud that my ears got blocked. They loathed me the way the Crusaders loathed blasphemers.

I could only edge ahead a few dozen metres at a time.  Even this slow pace required a huge amount of energy. I was scared of being trampled to the ground.

The crowd geared up to lynch some other fatso in a balaclava. They thought they’d got me. At the last minute, he managed to reveal his face and save his life. It was a close shave.

Protesters were arriving from the farthest ends of the city. They crept out of their dark dens, dingy flats, cellars, bedsits and hovels. They got up from their computers, put down their tablets. They were hurtling along the streets like a swollen river.

Tens of thousands of Anonymous masks and balaclavas out in the open. Summoned by Google and Facebook, by algorithms based on previous searches and clicks.

The information war roused them from their computer solitude. It wasn’t the truth they were looking for on the web but a shared worldview. Every new like increased their bias against me, corralling masses of them into like-minded groups and supplying them with the kind of gibberish they yearned for. They longed for confirmation that I was a tranny and a Jew. Though it wasn’t true, it could easily have been.

Around the corner a shop window was on fire. The air quivered. Smoke billowed above the barricades. Some protesters wore ski goggles, others sported builders’ hard hats and gas masks with skulls on them. I heard rhythmic banging on metal and drums.

The clothes on my back and shoulders were damp. Protesters dragged up a mannequin with my face and hung it from the gallows.

A procession organised by the Institute of Unborn Children arrived. Pilgrims wearing cowls dragged floats plastered with billboards boasting blown-up photos of abortions. They carried poles with dummy foetuses mounted on them, drenched in fake blood. They held up banners with slogans in Cyrillic script, grotesquely misspelt.

The Reich’s Devils biker gang roared. It was followed by neo-Nazis marching in formation, and members of the radical left carrying banners with hammers and sickles, and portraits of the Leader-Father and the Leader-Son.  Priests in vestments sang, their eyes raised heavenwards. Young men bearing sacrificial gifts and murmuring prayers hoisted church flags and enormous black crosses. The veiled monk Yevgeny Semionov was also there to greet the crowd. Next came a column of supporters of alternative and conspiracy media. A delegation of healers and naturopaths brought pendulums, spheres and a zapper. Veterans of the hybrid war threatened ferocious revenge.

At last, they all joined forces. They were united by their need to hate something that was alive, warm, close, ours, something tangible.

On the rostrum stood two men who read out an address by a fake Keanu Reeves. That is, by me.

I refuse to be a part of a world where men force women to wear clothes that make them look like prostitutes. Where there is no respect and the human word can’t be trusted unless it also involves a promise. Where women don’t want to bear children and men don’t want to have families. Where young people think they’ve achieved something just because they drive their parents’ cars, and those in power openly show that they don’t give a damn about anyone else. Where hypocritical people profess their faith in God with a bottle of drink in their hand and without any clue about religion. Where everything is just blah-blah-blah because of blah-blah-blah in order to blah-blah-blah.

They hated me using my own words! A textbook example! At the end of the speech, the loudspeakers roared:

Fight for what is ours: Tatras, Moscow, Urals!

Don’t feed the troll, kick him out, score a goal!

Don’t count on Sion or Soros, you bloody homos,

You tranny, you virgin, we’ll send you lurchin’,

You stoner, you snowflake, go to hell for your own sake,

We’ll kick your ass, the bell will toll, is that what you want, you troll?

We’ll string you up, hang you out to dry! Be up front, roll a joint,

He’d kill his own dad for a petrodollar,

Don’t like, only diss, block, report and dismiss, screech at the bitch,

The Reich patrol will hunt down the troll,

Save your like for my mike, negate the Troll, lol, lol, lol!

Fatherland Crew are taking part in a rally against me? Anything is possible now.

All sorts of rude jokes about me went viral. I was the only one not sharing them.

I spotted a tabloid with my photo at a newsstand. I’ve taken the front page over from a famous MC who came out as gay even though he’s married with three children.

Online computer gamers could slap me in the face for free, kick me in the gut and, on reaching the final level, saw my head off.

Blood tickled my nostrils, I felt the hot liquid trickling down my throat. I spat and wiped my mouth with the back of my hand.

I forget… I don’t know… My name is… My name was… I was no longer sure what my name was. They have taken everything from me. I am a troll.

Yet all I wanted was to achieve my purpose. My plan. Our plan.

I tried to elbow my way out of the crush and retreat into safety. Mustn’t attract attention.

Too late. I was surrounded. I looked for a gap to slip into but… I couldn’t see an escape route, I had run out of energy and time. Think. What are your options? Get the hell out of here. Concentrate, breathe, you’re not tired, you can make it. Where to? Anywhere.

They were marching towards me, in close array, like an army conquering a fortified castle. Without a word, in the kind of silence that often falls before an explosion. Their eyes blazed eerily.

I was scarpering off as fast as I could. Someone grabbed me by the shirt from behind.

“Take your mask off!”

Fair enough. It was to be expected. No escape.

My brother, Johana, my mother, the discussion boards, it all flashed through my mind. I wished I could stay offline and never be connected again. No more discussing, commenting, trolling.

Eyes filled with hostility were fixed on me. I looked around in panic. I hoped to see someone who might offer me shelter, put in a good word for me. Nothing. I had no real friends, only virtual ones generated by myself or other trolls. My mates = computer bots. They mimic real profiles and disseminate whatever I tell them to.

“Take his balaclava off, right now!” a male voice yelled.

Someone ripped off a piece of material.

The mute white mask they saw underneath shocked them. A smooth face, a shaved head. Featureless and expressionless, shapeless, a spitting image of the eggheads in Chirico’s paintings.

“I have to speak to Johana, I have a vitally important message for her,” I said. I sounded like the old Daft Punk on vocoder, rasping like a mortally wounded Darth Vader.

I no longer had a name, or voice, or face.

This excerpt of Michal Hvorecký’s novel Troll was translated into English for the first time and first published in Index on Censorship spring magazine, a quarterly global publication covering freedom of expression. 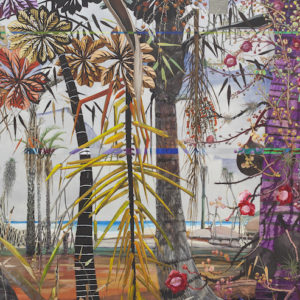 Every Day is Earth Day: 365 Books to Start Your Climate Change Library The idea of a single day devoted to the earth is absurd. In the 49 years since the first Earth Day was celebrated, human...
© LitHub
Back to top