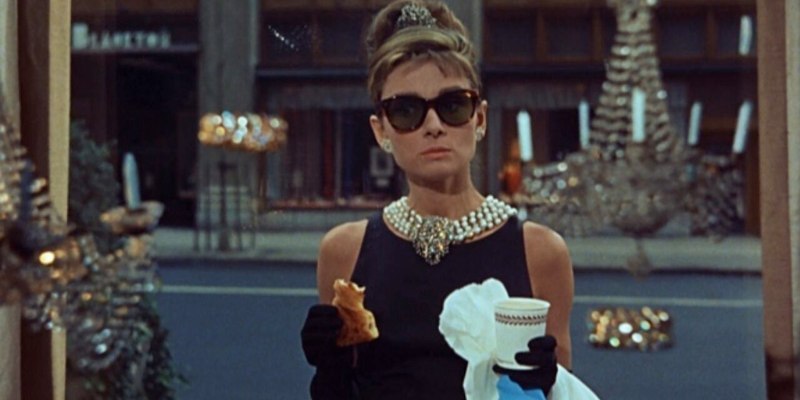 Because capitalism is alive and well, ahead of Black Friday (which seems to be encroaching earlier and earlier), I’ve been thinking about a few fictional shopping sprees. While shopping can be gluttonous and indulgent, wasteful and vapid, in literature it also sometimes signifies transformation or the start of a journey. (For one particular maximalist, it’s the whole journey!) So… treat yourself to the literary equivalent of a mall montage. And, remember, the best place to shop is always at your local bookstore.

“She was going from shop to shop one day, looking for a nice purse to send her sister, Betty. The sun was out, she waited at the curb for the traffic lights to change, and then when they did, she caught sight of herself in the plate glass of a store opposite. She was an ordinary woman, mooning along the street, who looked like somebody else. She thought: My God, I look like somebody’s mother. The thought paralyzed her for an instant.

[…] If I don’t do something, she thought, nobody else will. I’ve got to do something. It’s already too late anyway, so why not? Could anything be worse than the way things are?

She went and had her hair cut, bought some clothes and earrings, makeup, bead necklaces, a bracelet and some nail polish which she never used but suddenly thought she might try.”

From Nicholson Baker’s The Mezzanine:

“When I drew close to the up escalator, I involuntarily transferred my paperback and CVS bag to my left hand, so that I could take the handrail with my right, according to habit. The bag made a little paper-rattling sound, and when I looked down at it, I discovered that I was unable for a second to remember what was inside, my recollection snagged on the stapled receipt. But of course that was one of the principal reasons you needed little bags, I thought: they kept your purchases private, while signaling to the world that you led a busy, rich life, full of pressing errands to run.”

From Sophie Kinsella’s Confessions of a Shopaholic:

“I honestly feel as though I’ve run an obstacle course to get here. In fact, I think they should list shopping as a cardiovascular activity. My heart never beats as fast as it does when I see a ‘reduced by 50 percent’ sign.

I count out the money in tens and twenties and wait, almost shivering as she ducks behind the counter and produces the green box. She slides it into a glossy bag with dark green cord handles and hands it to me, and I almost want to cry out loud, the moment is so wonderful.”

From Truman Capote’s Breakfast at Tiffany’s:

“The rest of the afternoon we were east and west worming out of reluctant grocers cans of peanut butter, a wartime scarcity; dark came before we’d rounded up a half-dozen jars, the last at the delicatessen on Third Avenue. It was near the antique shop with the palace of a bird cage in its window, so I took her there to see it, and she enjoyed the point, its fantasy: ‘But still, it’s a cage.’

Passing a Woolworth’s, she gripped my arm: ‘Let’s steal something,’ she said, pulling me into the store, where at once there seemed a pressure of eyes, as though we were already under suspicion. ‘Come on. Don’t be chicken.’ She scouted a counter piled with paper pumpkins and Halloween masks. The saleslady was occupied with a group of nuns who were trying on masks. Holly picked up a mask and slipped it over her face; she chose another and put it on mine; then she took my hand and we walked away.”

“Mrs. Dalloway said she would buy the flowers herself.”