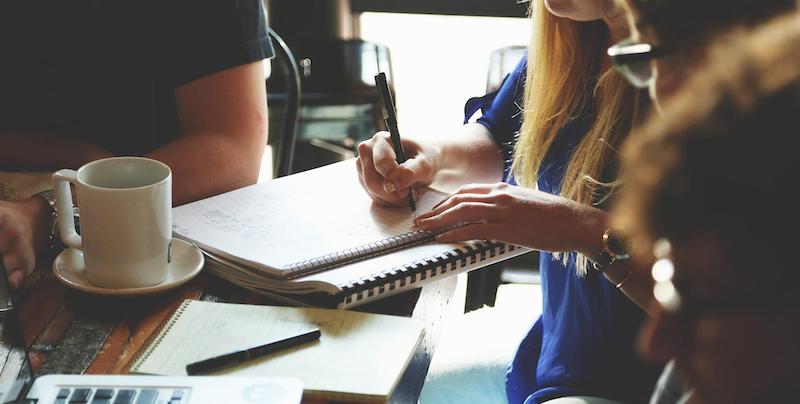 By Daniel Hahn and Lisa Dillman

Lisa Dillman, one of the translators of Canción, describes the pleasures of co-translation

Translation is often taken to be a solitary affair. Saint Jerome, patron saint of translators, is generally pictured alone, if you don’t count the skull—and the open book, of course. [And the big cat, Lisa, don’t forget the big cat!] … And the big cat. And if unholy translators make it into the collective imaginary, it is likely as lone, socially inept figures, hunkered down with a pile of dictionaries, food crumbs in their beards or on their blouses. [Ha.]

The truth, however, is that translation can be a joyfully collaborative affair in many regards. Frequently, we engage with others on forums or in person, we meet in collectives to debate universal and idiosyncratic quandaries. We even translate entire books together. [Maybe add a reminder that working with author, editors, etc., is already collaborative?]

[OK, U.S. spelling throughout. You win. This time.]

In this particular instance, the supremely brilliant and sublime Daniel Hahn and I translated Eduardo Halfon’s Canción together, in conjunction with the author himself. [You know, that idea of keeping the Spanish title is growing on me…] It was our fourth joint Halfon, the first of which, The Polish Boxer, also had Anne McLean, Thomas Bunstead and Ollie Brock on the translating team. In each instance, Eduardo has played an active role, and we’ve hashed things out as a group, via Zoom or in person— [Lisa, I’m toying between dash and semicolon there, you know how I feel about these things—your thoughts? Shall we ask Ed?] the experience can be like going through three edits at once.

You debate multiple takes on phrasing and connotation, sonority and cacophony, and often change your view upon hearing someone else’s. Doing this from the get-go, before an actual edit [let’s insert: “publisher’s edit” here, for clarity] is productive, eye-opening, and a lot of fun.

To that end, Danny and I wanted to share a few beloved co-translations, which— 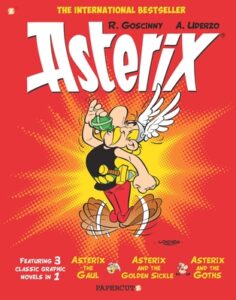 When I was a kid (this is Danny now, not that it matters), I particularly loved the Asterix books and the Tintin books—both of these great series, as it happens, being co-translations. There are many reasons to embark on a collaborative co-translation [Redundant? Can a co-translation be anything but collaborative?], but in some cases it’s about bringing together a pair of quite different, symbiotic skillsets. In the case of the Asterix books, the linguistic brilliance and the humour—sorry, Lisa, humor—were Anthea Bell’s, but for most of the albums, she also relied on the French cultural expertise of teacher Derek Hockridge. The two of them worked together on the albums for decades. The results still sparkle. 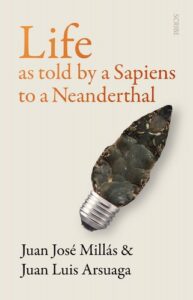 Juan José Millás & Juan Luís Arsuaga, tr. by Thomas Bunstead and Daniel Hahn, Life as Told by a Sapiens to a Neanderthal

Lisa here. [Lisa, I’m pretending this one is by you, so people don’t know I’m plugging my own book.] This book is the work of two definitely very good translators. Co-translations can follow different processes, depending on all sorts of factors. This one, a delightful nonfiction book about the origins of humankind, is told in two voices—the narrator, novelist Juan José Millás, and his paleontologist friend Juan Luís Arsuaga with whom he talks. [Co-written as well as translated: it’s not just us doing it now…] So each translator did the first draft of one of the voices, then they sat down together for a couple of days and edited it—sharpening the distinctness of the voices, clarifying, finding every note of the humor—by reading the whole thing aloud together, almost like a play. It was fun. I mean, it sounds fun. 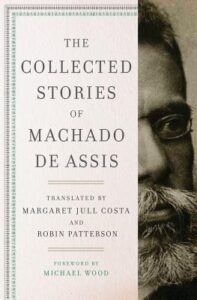 The Brazilian writer Machado de Assis was one of the great makers of short stories. Writing in Rio de Janeiro at the end of the 19th century, with a beady eye on the society around him, his originality and his sense of humor still feel fresh and modern [suggest “contemporary” so as not to confuse with literary modernism] today. We mentioned earlier that there are many possible reasons for co-translating, and you might assume that sheer scale might have motivated this one. The volume is over 900 pages, so having a co-translator must have helped for company and morale. Whatever the reason, it works. Machado de Assis has been translated many times before, but this particular voice serves his talents beautifully. [Can we pls note that one of us has recently also been translating him—alone! And wow, he’s difficult…] 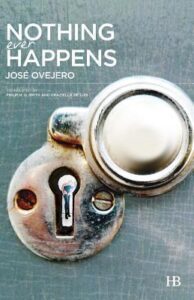 José Ovejero’s novels are granular critiques of contemporary society. They are also written in razor-sharp prose that is sometimes funny, often page-turningly suspenseful, and always poignant. In Nothing Ever Happens, co-translated by Philip H. D. Smith and Graziella de Luis, contemporary city life is portrayed with understated pathos. The novel follows the lives of a small cast of characters, including Carmelo and Nico, a wealthy Madrid couple with banal first-world problems, and Claudia, their Ecuadorian housekeeper and nanny, who battles vastly different issues. As theirs and other lives intertwine, we see beneath the neat surface to uncomfortable depths where tragedy lurks. 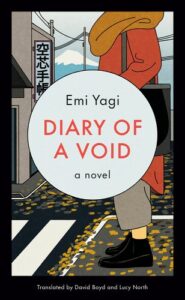 Emi Yagi, tr. by David Boyd and Lucy North, Diary of a Void

Oh, now I want to read that last one. Meanwhile, let’s go with Emi Yagi’s wry story about a woman who feigns a pregnancy (which she does mostly to avoid doing the more tedious of chores at work), and about how the deception changes her sense of herself and her place in society. It’s a story about transgression, about challenging the expectations people place on us, it is often funny and ultimately quite unsettling [OK with run-on?]. Unimaginative reviewers are always describing translations as “seamless,” but for a co-translation, this can sometimes be a term of meaningful praise. Here we have two brilliant translators, and a single, singular voice without a seam in sight.

Wait. I’ve forgotten which of us wrote that one. Is it one of yours?

No, I wondered that, but I think the “brilliant” sounds like you.

Well, whatever. A couple more? 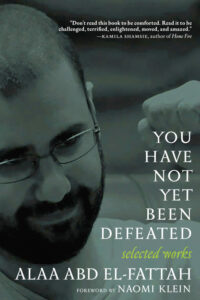 Alaa Abd el-Fattah, tr. by a collective, You Have Not Yet Been Defeated

Written from within a changing Egypt, this is a selection of pieces by the remarkable activist Alaa Abd el-Fattah. Through a collective of anonymous translators, we encounter his clear-sightedness, his fearlessness, his political passion. The texts, many of them written from prison, range from essays and interviews to social media posts, and span a decade of engagement with ideas and a defiant refusal to accept the unfairnesses [if we keep “page-turningly,” we’re keeping “unfairnesses”] of the system around him. Altogether it makes up a collection that is various but coherent; and such powerful writing in this translation, too. It is not always an easy read, but it is a powerful and inspiring one. 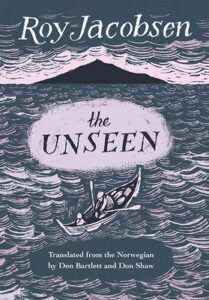 The late Eileen Battersby, formidable book critic at the Irish Times, called The Unseen “easily among the best books I have ever read.” Set on Barrøy, a sparsely inhabited Norwegian island, it’s an extraordinary recreation of slowly evolving island life, grim, physical and weather-beaten, a hundred years ago. There are many events—births, deaths, departures and returns—though it won’t be the plot that keeps you reading, but something else: a sort of spell that it casts. The two co-translating Dons do magical things with the language—mostly pared back, exact, occasionally soaring. 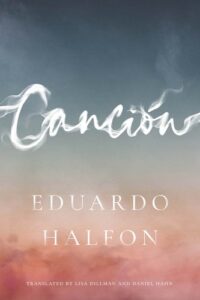 Daniel Hahn is a writer, editor, and translator, whose translations from Portuguese, Spanish, and French include fiction from Europe, Africa, and the Americas. Among other honors, his work has been shortlisted for the International Booker Prize and Los Angeles Times Book Award, and received the Independent Foreign Fiction Prize and International Dublin Literary Award. He lives in Lewes, England.
Lisa Dillman is the translator of numerous books by Spanish and Latin American writers. Among other honors, her work has been named a finalist for the National Book Award for Translated Literature, longlisted for the PEN Translation Prize, and received the Best Translated Book Award and Oxford-Weidenfeld Translation Prize. She teaches in the Department of Spanish and Portuguese at Emory University in Atlanta, Georgia. 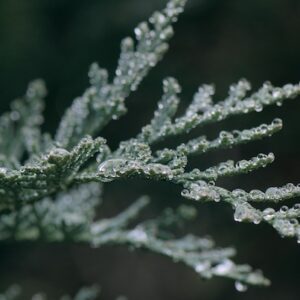 When my father died by suicide in December 2009 and I felt adrift in grief, I found myself reading many books to better understand...
© LitHub
Back to top
Loading Comments...