When my father died by suicide in December 2009 and I felt adrift in grief, I found myself reading many books to better understand my experience. In the midst of reading, I also started writing. The work I did in this early period became Sinkhole: A Legacy of Suicide, though it took me a few years to conceive of the book and many more years to complete it.

Over the next ten years, I made a study of grief as both a reader and a writer. Grief is a messy and complicated process, one that is not easy to narrate. In my own writing I was often flummoxed by the task. As a reader, I was sometimes frustrated by the way some books made the arc of the story too smooth, too sentimental, too melodramatic, or too wordy. As a poet working in prose for the first time, I wanted to hold on to lyricism, I wanted to embrace brevity, and I wanted to express emotion into a succinct a form as possible.

Here are six books by writers with similar aims, books that explore loss through poetic means, and books in which I’ve found consolation, inspiration, and profound instruction. 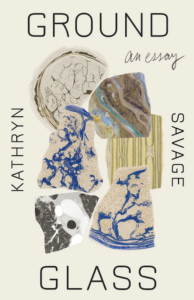 In this highly lyrical and nuanced book-length essay, Kathryn Savage mourns her father’s death to gastric cancer by seeking answers in the refuse of a polluted industrial site in Minneapolis where she grew up. What starts as a personal investigation quickly widens to a more comprehensive ecological inquiry driven by a writer with a fierce and careful attention to language. Savage uses extensive research and journalism to survey brownfields and Superfund site in her commentary, but much of the book’s power points inward, offering readers an intimate view of the writer’s supple and commanding mind. 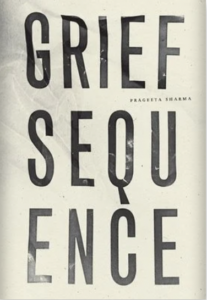 Grief Sequence, Sharma’s third collection, traces her husband’s fleeting battle with cancer and the year that follows his death. Sharma sifts through the refuse of her lost marriage with surprising candor, revealing both anger and anxieties in the wake of her husband’s absence. Though the book marks the stages of Sharma’s grief, time is muddled in the narrative and grief is represented as a complicated and fluid state. “I was a margin-cord rammed with storytelling,” Sharma writes early in the book, “and with susceptible palpitation to sentimentality in search of a piston: I was sounding out each course tangled lyric, unladylike but finding comfort in its seam.” 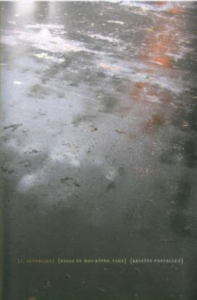 Written over a period of six years following her father’s death by suicide, Krista Prevallet’s I, Afterlife is an unflinching look at the sorrow and confusion those left behind by suicide often feel. Prevellat, known for her experiments in form, builds a narrative out of fragments in this book, alternating between the language of a police report and the lyricism of poetry, embodying the entanglements that Prevallet refers to in her definition of elegy: “Afterlife is a tidy package that presents a simple truth,” she writes. “Elegy is the complexity of what is actually left behind.” 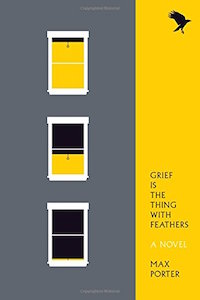 Max Porter, Grief is a Thing with Feathers: A Novel
(Graywolf Press)

Max Porter’s debut Grief is a Thing with Feathers—part fable, part novella, part essay—narrates the years that follow a woman’s tragic death from the alternating perspectives of her children, her husband (a Ted Hughes scholar), and a crow that enters the house and helps guide the family in their sorrow. Crow speaks in a kind of poetic verse and binds this strange and fantastical story together, which also proves to also be a deep examination of grief. Wildly inventive and difficult to characterize, this book will be of particular interest to readers who enjoy experiments in genre. 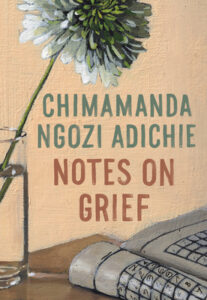 Written in the wake of Chimamanda Ngozi Adichie’s father’s death in 2020 (at the height of the COVID-19 pandemic), this spare, meditative work centers on the early, acute stage of grief, often difficult to understand and describe. Adichie approaches the subject of her father with a novelist’s eye—drawing a vivid and loving portrait of her father as both a character and a man—but she also employs lyricism in her search for the language of her sorrow “How is it that the world keeps going,” she writes, “breathing in and out unchanged, while in my soul there is a permanent scattering?” 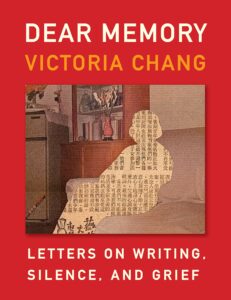 In her first work of nonfiction, poet Victoria Chang Dear Memory explores the connections between grief and memory in a collection of letters, poems and found collages. Chang writes of her mother’s death, her father’s dementia, and her family’s struggle to talk about trauma, racism, or their past. Chang’s letters interrogate that inherited silence by speaking directly to Chang’s ancestral dead. She writes to ask questions that had become urgent in the wake of her mother’s death. Chang’s text is interspersed with striking collages that use family photographs, documents and hand-written dialogue that make for an unforgettable reading experience. 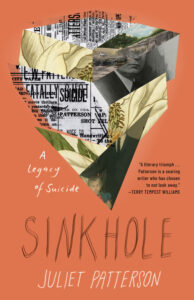 Sinkhole: A Legacy of Suicide by Juliet Patterson is available via Milkweed Editions.

Juliet Patterson is the author of Sinkhole, as well as two collections of poems, Threnody and The Truant Lover, a finalist for the Lambda Award. Her poems and essays have appeared widely. She has received fellowships from the Jerome Foundation, the Minnesota State Arts Board, and the Minneapolis-based Institute for Community Cultural Development. Her other awards include the Arts & Letters Susan Atefat Prize in nonfiction and the Lynda Hull Memorial Poetry Prize. She lives in Minneapolis. 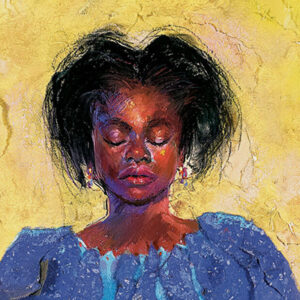