From the Collection Divine Blue Light (for John Coltrane)

As a blizzard of birds
as Hottentots
as density by phonemes 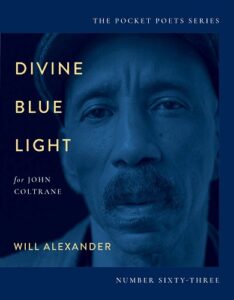 Excerpted from Divine Blue Light (for John Coltrane) by Will Alexander. Copyright © 2022. Available from City Lights.

Born in 1948 in Los Angeles, Will Alexander is a poet, novelist, playwright, philosopher, visual artist, and musician. He has published over two dozen books in a variety of genres and has earned many honors and awards including a Whiting Fellowship for Poetry, a California Arts Council Fellowship, the PEN/Oakland Josephine Miles Award, a Before Columbus Foundation American Book Award, and the 2016 Jackson Poetry Prize. He has also exhibited his artwork in group and solo shows. His work is known for its visionary, oracular surrealism and the influence of Negritude. Among his publications are Refractive Africa (New Directions, 2021/Granta, 2022), which was a finalist for the 2022 Pulitzer Prize in Poetry, The Combustion Cycle (Roof, 2021), Across the Vapor Gulf (New Directions, 2017), and The Sri Lankan Loxodrome (New Directions, 2009). His book Compression & Purity (2011) was volume five in the City Lights Spotlight Poetry Series. He is currently the poet-in-residence at Beyond Baroque in Venice, California. He has lived his entire life in Los Angeles.
Share:

What is an Office, Really? How Ideas Take Shape in Analog Spaces 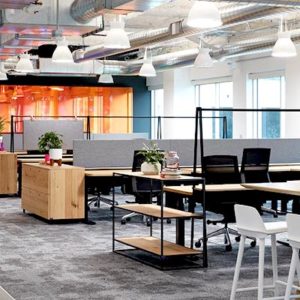 What is an Office, Really? How Ideas Take Shape in Analog Spaces What is an office? Is it simply a building where people do their work, or does it serve a deeper purpose? My personal...
© LitHub
Back to top
Loading Comments...