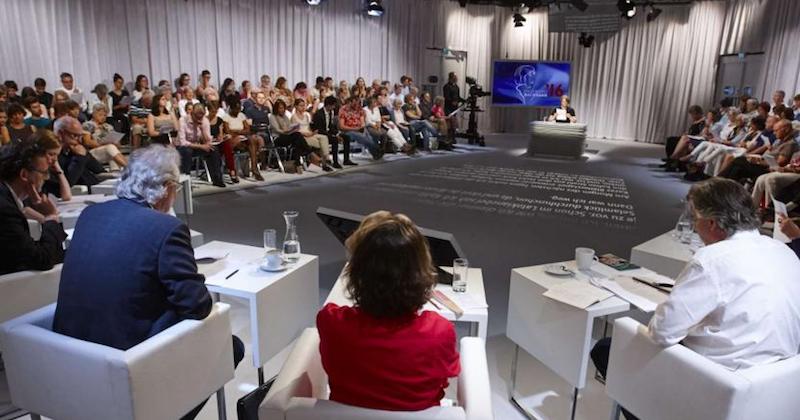 Recently I was thrilled to learn of Writers Unplugged, a writing show in Bhopal, India where local writers compete in challenges. I love both writing and the constant human surprises of reality television, so when I heard today that Austria has its own prestigious writing television competition, I got excited—especially when I learned it was referred to as “the Deluxe Tinder of the publishing sector.” Games! Excitement! Choice! Yet as it turns out, the Festival of German-Language Literature, also referred to by the name of the highest award it gives out, the €25,000 Ingeborg Bachmann Prize, is . . . well . . . not what someone accustomed to American competition shows might expect.

Here’s how the televised competition goes: each of the competitors reads 25 minutes of unpublished work for the judges. (There’s no soundtrack or cuts or interesting camera angles, because wouldn’t that distort our perception of the writing?) Then, the members of the jury give feedback. It’s just like how the judges on a panel show act—but in real time, for a half hour, getting really into the text. This happens for three days.

And if you’re a contestant considering catching the judges’ attention with a stunt, don’t even think about it. Not Rainald Goetz, who cut his own face with a razorblade in his 1983 reading, nor Urs Alleman, who read from a text called Babyfucker in 1991, nor Philipp Weiss, who ate his manuscript in 2009, received the Ingeborg Bachmann Prize. Stunts aren’t quite as fun when judges talk about them for a half-hour afterward.