This is Not a Primer on American Fascism

I live in Romania, that country in Eastern Europe that John McCain thinks does not have a Supreme Court. On Sunday we all saw the results of the first free elections in 20 years in Moldavia. Igor Dodon won, he’s a Russophile extraordinaire. He defeated Maia Sandu. Rumen Georgiev Radev won in Bulgaria, the socialist general, victorious over Tsetska Tsacheva. In 2014 Petro Poroshenko won the Ukrainian presidency election over Yulia Tymoshenko. All of these women were extremely qualified for the job. All of these women were pro European Union, pro freedom of speech and pro human rights. And if you think in 2016 it maybe not be compulsory to list this. If you think it should’ve become common sense by now. It hasn’t.

Viktor Orban has been building fences on the Hungarian border to stop refugees for over a year now. Hundreds of thousand of women flooded the streets of Poland to prevent the ban on abortion just a few months ago. The Romanian Supreme Court—yes we do have one—ruled against the same-sex civil partnership just a little before that.

I got to thinking that maybe I am lucky I just have to face misogyny. I got to thinking I should feel guilty for having just one problem to think about for myself. I can walk into a restaurant without any suspicious glances in my direction, I can walk the streets without people suddenly protecting their belongings, I can speak my mind. And then I got to thinking that this is not nearly enough. I want to wear a miniskirt without hearing the pussy-grabbing wishlist. I want the people I meet to use my name when they address me and not a fluffy nickname of a bunny negotiating its petting value. I want to have casual sex without being called a slut. I want to be a mother and I want to have the option not to be called a murderer by any form of government if I ever decide not to be. I want to walk on the street with friends of all skin colors as people just walk by, minding their fucking business. I want to attend the wedding of my gay friends.

You’d think that maybe a primer on fascism needs to be written as people feel it is too strong a word for the leader of the free world. But so many have been written before. I think about the impact of such “legacies.” Not experiencing tragedy seems to sweeten all theoretical atrocity. And all theoretical atrocity numbs the brain when over-studied. If only we could we could fight immunization to atrocity. We’re not all coroners eating our peanut butter and jelly sandwich next to the corpse. That is not our job. Hitler, the poster boy for fascism, wrote the classic. We had our share in Romania too in the 1930s starting with Ștefan Tătărescu at the helm of abomination. Those are probably my father’s primers for fascism. He knows them by heart. He is a history teacher. He makes sure others know them by heart as well. Eugene Ionesco’s Rhinoceros is probably my mother’s primer on fascism. She is a teacher as well. I told her that she had a common point of reference with the New York Times. She enjoyed that piece of information.

Both of my parents know fascism primers by heart, they are both kind, decent respectful people, they are the talk-to-your-neighbors-respect-the-speed-limit-always-trying-to-do-the-right-thing kind of people. They are free of the virtual bubble that I seem to live in. They do not have Internet at home. My mother calls me when she needs her email checked for work. They have a laptop that sits quietly under my father’s pillows. He only sees it when he makes the bed at night. They see the news on cable TV. But of course the things they are most willing to fight for, are the things they experienced. I never had to have a conversation longer than five seconds with my mother about the czarny protest. Abortion was illegal in Romania before 1989. She had friends who died because of illegal impromptu interventions. She had friends who got arrested as well. She knows exactly what that feels like. Still, the only time we had a very long conversation about LGBT rights was when they saw on the news that Obama had passed the same-sex marriage law in the US. It was the first conversation we had about this in all of my adult life. And it was last year, on this event that happened over the Atlantic, not when it got adopted in Denmark, or Belgium, or Ireland, or Colombia, that was barely in the news. It wasn’t even in 2001 when homosexuality was decriminalized in Romania—that didn’t get any coverage at all. I never had a conversation about misogyny with my father before this weekend when I visited and he was astonished by Trump’s discourse about women. They always get their information from history, literature and the TV news cycle.

We share a continent with Poland, and Ukraine, and France; we share borders with Bulgaria and Moldavia, but we share the news cycle from them and the United States 50/50.

My parents get their bits and pieces of information that they put together and they always, always vote. And it’s not just them. It’s a whole generation, and a generation before that that has the discipline to vote just like the discipline to brush their teeth every morning.

I have about 1,000 friends on Facebook, I’m not such a popular girl. And an overwhelming majority sees the world as I see it. They read like motherfuckers. Books, articles, they watch talkshows, they are opinionated and vocal. They are unprejudiced and open minded. They have created a great world on Facebook, and Twitter, and Instagram. Living there would be the goldfish’s last wish for himself. Some of these people do live in there. The Internet covers the world better than cable TV. Nonetheless, one in three friends wants to visit New York before Budapest, one in three friend reads the New York Times before they read Le Monde, one in three friends are immeasurably more terrified of Trump than they are of Marine Le Pen—the French election being the only election I mentioned where I am far from cheering for the woman candidate.

The evangelists of this new virtual world despise Le Pen’s agenda as well. They are not just on my Facebook list. And their primer on progressive thinking has many, many shapes on social media. And hope has many virtual shapes as well. Still, some of those digital activists missed more than one election. We cannot vote in this new wonderful ever-expanding world we created pixel by pixel. We still have to get dressed, check for our keys, get out the door and show up at the ballot. That is how we make the transition. Social media has become this Election Tron-like world. Welcome to the grid! We lead out battles on social media, and sometimes, exhausted by all this virtual flatland training we forget to engage in the real fight. I want to see the world we see on social media when I get out of the house. Because for many, what they see on the feed, what they read there, what they say there is the normality that they wish for. It’s the normality they want to live in. It’s the normality I want to see outgrowing the desktop, the interactions that make us smarter, and the people I wanna work with. Not the absurd, the bullies, the unprepared, the heavy fisted and the brainwashed. Now is the best time to act on it, to own it, to speak up for it. Hands down, boots on the ground. 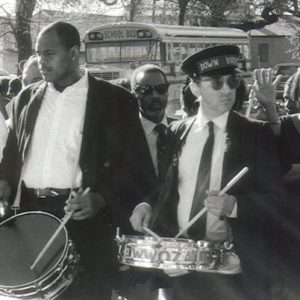 We woke up to a diagnosis. We weren’t entirely surprised by what we learned because we felt sick for a long time. The signs...
© LitHub
Back to top