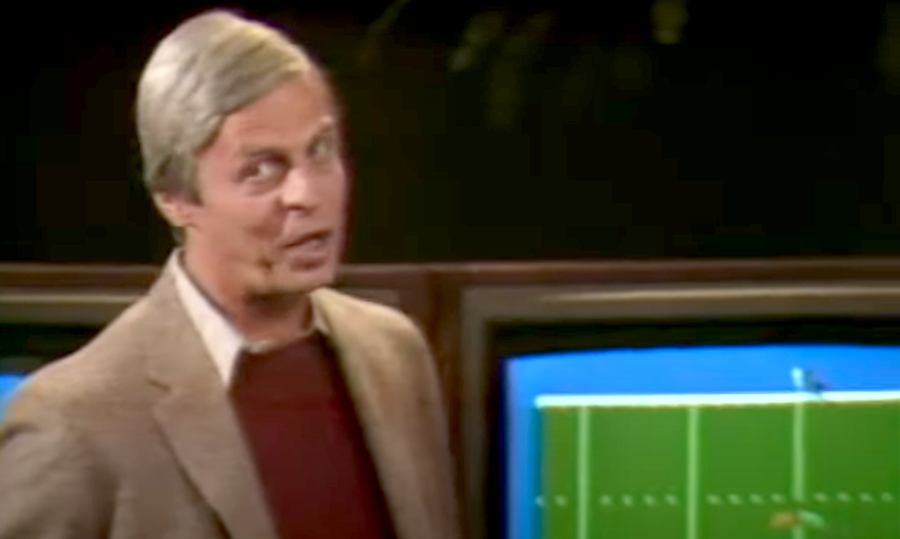 This 1980 George Plimpton TV commercial for video games is a masterpiece.

Many of us lament the era when writers were famous enough to shill for major national advertising campaigns, a time when novelists had the kind of name recognition you could actually sell-out with—Mickey Spillane for Miller Lite, Frederick Forsyth for Rolex, Anita Loos for Ballantine Ale… (The equivalent these days would probably be Jonathan Franzen selling birding binoculars or something.)

I submit for you below probably the purest expression of the writer-as-ad-man, George Plimpton hustling Mattel’s Intellivision video game console, one of Atari’s early competitors. Each time I watch this 30-second spot I notice something new.

The commercial aired in 1980, at which point Plimpton was largely done with the immersive sports journalism that had made him famous: playing quarterback for the Detroit Lions in training camp, pitching a few innings against some National League stars, starting a period as a pre-season goalie for the Boston Bruins. But just in case you weren’t sure of the identity of this well-groomed gentleman with the blue-blood diction, the ad reminds us, in ungainly cable access font, that this is “George Plimpton, author & gamesman.” Plimpton, sitting in a plush armchair surrounded by plants, immediately and jauntily informs the viewer that “I’ll try almost anything,” which obviously includes a head-to-head comparison of Intellivision and Atari. Plimpton rises from the chair and approaches the camera, putting us all at ease in his casual writers’ uniform of muted earth tones, monochromatic sweater over button down, under sports coat. Behind him, in what passes for a well-appointed Upper East Side study, sit two enormous color TVs—side-by-side where books should be—for the enjoyment of twin James Spaders sitting on the couch. Plimpton then compares Atari baseball and football with Intellivision’s versions and, yes, finds them wanting. (Sidenote: I can’t believe we ever got excited by these games, but we did.)

It’s not hard to imagine this all happening in a quick afternoon of shooting, maybe three or four takes, followed by Plimpton treating half the crew to scotch and skirt steaks at Donohue’s. Now that was a life worth living.