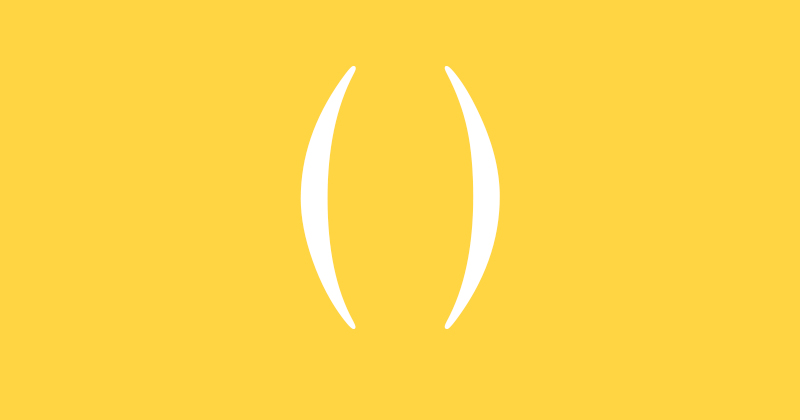 These are the 5 (er, 10?) best parentheses in literature.

I love a good aside. I live for literary intrusion. I want comments on my comments, discursive thinking, footnotes. I want to be distracted, taken off course for a while before being firmly set back down. What I’m saying is this: I can’t get enough parentheticals. So on the watery occasion of it being parenthesis-master Vladimir Nabokov’s birthday (April 22), I have collected few of my favorites (with the obligatory parenthetical caveat that I know I’m missing some, too many, maybe some major ones—The Mezzanine? I can’t remember—but due to constraints of time and space and memory, this simply can’t be helped) here.

My very photogenic mother died in a freak accident (picnic, lightning) when I was three, and, save for a pocket of warmth in the darkest past, nothing of her subsists within the hollows and dells of memory, over which, if you can still stand my style (I am writing under observation), the sun of my infancy had set: surely, you all know those redolent remnants of day suspended, with the midges, about some hedge in bloom or suddenly entered and traversed by the rambler, at the bottom of a hill, in the summer dusk; a furry warmth, golden midges.

The first parenthesis in this sentence is arguably the most famous in all of literature—because, of course, it is perfect. The arresting off-handedness, the cadence, the sonic double-mirroring—pic/nic and light/ning—the simplicity. Chef’s kiss, as the kids may or may not still say. But I also hold a candle for the oft-forgotten second parenthesis in this sentence, which is also doing a lot of work. Don’t forget this comes right at the beginning, on only the second page, which lends a note of assured self-satisfaction to the faux apology, which also functions as a strong hint: “if you can still stand my style (I am writing under observation).” It immediately introduces the “present” of the narrator, and another layer too—the comment on the comment. It’s only the beginning of the complex winding that Nabokov will do in this novel, but listen, there’s no claiming he didn’t warn you.

Virginia Woolf, To the Lighthouse:

[Here Mr. Carmichael, who was reading Virgil, blew out his candle. It was midnight.] . . . [Mr. Ramsay, stumbling along a passage one dark morning, stretched his arms out, but Mrs. Ramsay having died rather suddenly the night before, his arms, though stretched out, remained empty.] . . . [Prue Ramsay, leaning on her father’s arm, was given in marriage. What, people said, could have been more fitting? And, they added, how beautiful she looked!] . . . [Prue Ramsay died that summer in some illness connected with childbirth, which was indeed a tragedy, people said, everything, they said, had promised so well.] . . . [A shell exploded. Twenty or thirty young men were blown up in France, among them Andrew Ramsay, whose death, mercifully, was instantaneous.] . . . [Mr. Carmichael brought out a volume of poems that spring, which had an unexpected success. The war, people said, had revived their interest in poetry.]

All right, technically these are brackets. But they function as parentheses, all of them in the middle section of To the Lighthouse, the section that is from the perspective (sort of) of the house itself. Like “(picnic, lightning)” part of their brilliance is in their abruptness; we’ve just read an entire section in which Mrs. Ramsay is the book’s main character, and then Woolf dispatches her in a paranthetical, “rather suddenly” indeed. (Speaking of lightning, etc.) Then Prue, then Andrew. Not Mr. Carmichael, though. I always say that To the Lighthouse is the novel that feels most like the experience of consciousness to me, and this section, which is of course called “Time Passes,” is a big part of that—after all, this is how we hear of the marriages and deaths and successes of other people, passed on in brief, an inadequate summary, and this is what it feels like when we do: alarming, yes, distant, even if we once knew and loved them, sad, fleeting, strange.

—Even losing you (the joking voice, a gesture
I love) I shan’t have lied. It’s evident
the art of losing’s not too hard to master
though it may look like (Write it!) like disaster.

The only two parentheses in this poem come in the final stanza, but it’s the last one “(Write it!)” that is the most notorious—the speaker of the poem exhorting herself to finish, to write the word “disaster,” suddenly difficult, despite the fact that it’s the fourth time she’s used it in this poem. What’s different now? That other parenthesis has a clue. . .

An ugly thing, that is what you are when you become a tourist, an ugly, empty thing, a stupid thing, a piece of rubbish pausing here and there to gaze at this and taste that, and it will never occur to you that the people who inhabit the place in which you have just paused cannot stand you, that behind their closed doors they laugh at your strangeness (you do not look the way they look); the physical sight of you does not please them; you have bad manners (it is their custom to eat their food with their hands; you try eating their way, you look silly; you try eating the way you always eat, you look silly); they do not like the way you speak (you have an accent); they collapsed helpless from laughter, mimicking the way they imagine you must look as you carry out some everyday bodily function. They do not like you. They do not like me! That thought never actually occurs to you. Still, you feel a little uneasy.

To be honest with you, I could have chosen almost any sentence from A Small Place for this list. The book positively bristles with parentheses; Kincaid uses them to explain, to criticize, to condescend, to name, to emphasize, to speak the unspoken, to distance herself and at the same time, to implicate herself—reflecting her dual relationship to Antigua (both native and non-resident) and to the text. Sometimes the parentheticals are a word or two; sometimes they go on for a whole page. But aside from their functional uses, they establish an almost hypnotic rhythm, a certain kind of syncopation created by the voice-within-a-voice. Also—they are funny. “(I once stood in hot sun for hours so that I could see a putty-faced Princess from England disappear behind these walls. I was seven years old at the time, and I thought, She has a putty face.)” Also—they are profound. I’ll just leave the last paragraph here too, because why not, it’s so good, and you (probably) deserve it:

Again, Antigua is a small place, a small island. It is nine miles wide by twelve miles long. It was discovered by Christopher Columbus in 1493. Not too long after, it was settled by human rubbish from Europe, who used enslaved but noble and exalted human beings from Africa (all masters of every stripe are rubbish, and all slaves of every stripe are noble and exalted; there can be no question about this) to satisfy their desire for wealth and power, to feel better about their own miserable existence, so that they could be less lonely and empty— a European disease. Eventually, the masters left, in a kind of way; eventually, the slaves were freed, in a kind of way. The people in Antigua now, the people who really think of themselves as Antiguans (and the people who would immediately come to your mind when you think about what Antiguans might be like; I mean, supposing you were to think about it), are the descendants of those noble and exalted people, the slaves. Of course, the whole thing is, once you cease to be a master, once you throw off your master’s yoke, you are no longer human rubbish, you are just a human being, and all the things that adds up to. So, too, with the slaves. Once they are no longer slaves, once they are free, they are no longer noble and exalted; they are just human beings.

i carry your heart with me(i carry it in
my heart)i am never without it(anywhere
i go you go,my dear;and whatever is done
by only me is your doing,my darling)

This poem is so famous (read: overused) as to have become very corny in my mind—but it’s actually wild. That punctuation! That abject disregard for the least-discussed, most taken-for-granted grammatical necessity: the space. I have some theories about the “meaning” here—mostly that the speaker is so desperate to be close and to represent closeness that the spaces are deemed unnecessary, too much separation between the lover and the beloved, or even the signifiers thereof—but honestly, the audacity would be reason enough to include it here.