There’s Still No Word for ‘Memoir’ in German Publishing

The Buchpreis, the Book Blogger, and Other Hot Topics Heading to Frankfurt...

It was a surprising preempt for the German book market—Ayelet Waldman’s A Really Good Day, her memoir of LSD microdosing (Penguin Random House, January 2017)—sold a few weeks before Frankfurt after interest from nearly a dozen publishers, according to the book’s Berlin-based subagent Elisabeth Ruge. An account of Waldman’s experimentation with therapeutic microdoses of LSD to combat destructive mood swings, the book is by nature revealing, not the least because it plays out against the backdrop of her family life with her husband, the writer Michael Chabon, and the couple’s four children.

Life stories in Germany have until recently been published under the standard Autobiografie category: Bruce Springsteen’s Born to Run, for example, published simultaneously this September by Simon & Schuster in the US and Heyne Verlag in Germany. Or the just-dropped Wolf Biermann autobiography from Ullstein Buchverlage, Warte nicht auf bessre Zeiten! (Don’t Wait for Better Times!). Biermann—a kind of Springsteen German socialist analog, if there is such a thing—is a lyric poet, singer and songwriter with a Jewish-Communist background. He immigrated in 1953 at age 16 to the GDR (“The smartest thing I ever did,” he told the Berliner Zeitung), having endured the the loss of his father at Auschwitz and the firebombing of Hamburg—a witness, as Ruge puts it, to the “German-German century.”

Stories of important politicians, World War I soldiers and Nazi resisters (and those who did not resist), Holocaust survivors and the descendants of those who died, writers and artists and other public figures—people who had a story to tell: These made up the autobiographical category in German letters since Bismarck’s time. It’s a genre which might not enjoy as large a readership as in England or in the US, but which has a special role in 20th

-century Germany, as the record of what really happened, a sort of person-by-person truth and reconciliation committee.

But the literary memoir à la Waldman or any of the long list of English-language megasellers since A Heartbreaking Work of Staggering Genius in 2000? “We don’t even have a word for memoir,” explains Jana-Maria Hartmann, a Chicago-based literary scout for Aufbau Verlag. Ten years ago the word was still used in quotation marks in the German press. “Up until recently it wasn’t considered literature. Too confessional.” There was the original/trade paperback category of what was called the “misery memoir,” where, as one German book agent joked to me, the person opposite you had to be gasping otherwise you didn’t get your book sold. But the crafted story from a life, as complex and well written as a novel, was hard to market. (Donald Antrim’s 2007 National Book Critics Circle-nominated The Afterlife: A Memoir was published here as Mutter: Kein Roman—literally translated, Mother: Not a Novel.)

“It might have to do with social media and people talking much more about themselves, positioning themselves very clearly,” Hartmann continues. “Millennial narcissism? I’m not sure. It used to be that if you wrote a nonfiction book you had to teach other people something, you had to have some fact that others didn’t. Just talking about your life or how you perceive things wasn’t well respected.”

Daniel Schreiber wrote Nüchtern: Über das Trinken und das Glück (Sober: On Drinking and Happiness), published by Hanser Berlin in 2014, as a hybrid between memoir and essay—along the lines of Maggie Nelson or Joan Didion. (Schreiber’s new memoir of home, Zuhause, comes out in January.) He described the dynamic to me. “Traditionally, the divide between fiction and nonfiction has been very strict in Germany—from the way publishers present their programs to how books are reviewed and even to how bookshops are laid out. Personal essays, memoirs and other more autobiographical forms of writing have mostly been falling through the cracks.”

Nüchtern was often reviewed as plain nonfiction, which to many reviewers meant, “Surprisingly well-written.” Yet Schreiber describes a slowly growing openness toward autobiographical narratives, or genre-bending in general, citing the influence (and success) of Karl Ove Knausgård. “It’s telling that most memoirs in Germany are still branded as novels, while they are anything but,” Schreiber notes. So the distinction seems to be primarily aesthetic. On the shortlist of the Deutscher Buchpreis this year is Thomas Melle’s Die Welt im Rücken (The World At Your Back, Rohwolt Berlin), the true story of Melle’s life with bipolar disorder, an “autobiographical radical work of the highest literary power,” notes the Buchpreis’s website. Normally the prize is given to the best German language novel of the year.

For Philip Winkler, author of Hool (Hooligan, Aufbau Verlag, also shortlisted for the Deutscher Buchpreis), a Faulknerian tale of youth and violence set in a provincial Germany of football matches and fight clubs, contemporary German literature lacks a certain roughness. “The ‘underdog’ literature often referred to as such is, in my opinion, short-changed,” he wrote to me in an email. “Publishers lack a willingness to take risks and experiment, or to depart from this traditional, only always wanting to be aesthetic, over-intellectual literature.”

Journalist and author Georg Diez sees it this way: “The memoir is something Germans struggle with, to the detriment of literature.” Diez’s memoir of his pastor father, Martin Luther, mein Vater und ich (C. Bertelsmann Verlag), comes out this month. For Diez, this is where literature begins: an individual trying to figure out his or her place in the world. “For a while I thought this had to do with a German way to approach culture as still divided into a form of high and a sort of low, the memoir being a bastard and thus shunned. Not serious, not high-minded. Today I would say it has maybe more to do with a general distrust in the individual and a tendency to prefer the collective, still.” His conclusion is arresting: “Somebody who says ‘I’ is not so easily manipulated.”

In the States, arguably versed in the “I” realm, we’re seeing exactly where (and to whom) untrammeled narcissistic representation of the self can lead. A scholar’s recent discovery that Hitler himself probably wrote an early 1920s biography—supposedly penned by an admiring aristocrat—in order to solidify support seems to prove the point: “Reality”— life story— can be concocted to suit any aim.

What is authenticity in German literature? Is it valued? How do fact and fiction entangle each other in a country that has told itself—and believed—as monstrous, epically destructive a lie as that of the Third Reich? In German “perception,” Wahrnehmung, has as its root the word Wahr, “true” or “genuine.” The idea of truth is encoded into the act of perception, like it or not. The confusion may be baked in.

“All that’s left is memoir,” Lionel Shriver said (rather darkly) in her now infamous Brisbane Writers Festival speech. We live in a world of “entertainment content,” as its known at the MIPCOM television and entertainment fair, which this year overlaps with Frankfurt. (Media masterminds will keynote.) I caught Jörg Winger, producer of 2015’s critically acclaimed German series Deutschland 83, which ran on Sundance TV in the US, on his way to Cannes. “In the bigger picture, TV networks all over the world are linking their products to existing brands. In the ‘attention economy’ which we’re in, it’s how you cut through the noise. It’s something people believe. It’s hooked in the collective mind, the collective memory. In the US now around half of new network shows rely on some kind of other property, fiction or nonfiction.”

In more structural ways, too, the German book industry is responding to a shifting media landscape. In 2016 the Frankfurt Book Fair will host THEARTS+, a five-day conference on the business of creativity, featuring speakers (they’re called protagonists) ranging from artist David Hockney to legendary German type designer Erik Spiekermann to author and self-described Internet optimist Jeff Jarvis. Orbanism, curated by Leander Wattig and Christiane Frohmann is for the second year in a row Frankfurt’s official digital venue. This year the Fair will host the announcement of the upcoming Blogbuster Prize, founded by Tobias Nazemi and awarded by a panel of bloggers and publishing professionals to a previously unpublished manuscript. Nazemi, who founded Buchrevier.com two years ago, has been pleasantly surprised by his blog’s reception among German readers, publishers and even traditional media critics, who have hung on longer than in the US to their position as tastemakers. “Blogs have intervened in marketing communications,” Nazemi says. “In the meantime, writers are increasingly turning to us bloggers to introduce their books. Only the traditional critics of literature are still reserved-to-skeptical.”

In a land where there is a term for printing against the paper grain—falsche Laufrichtung (say that three times quickly)—perhaps it is not surprising that the book itself persists as an object of desire, however. Joachim Unseld of Frankfurter Verlagsanstalt, publisher of another Buchpreis shortlisted book, Widerfahrnis (Encounter) works with the Stiftung Buchkunst, a book-arts foundation, to award the annual “most beautiful book” prize. “The physical charm of the ‘real’ book is an important detail,” Unseld points out, “without which mere content would not be able to survive. Good content needs a good physical equivalent.”

Unseld thinks German literature is actually rather healthy at the moment, even healthier than the entire book business, still suffering from what he calls the “breaking-in” of the digital. “We see quite a few new talented German authors these days with their first manuscripts. Especially young authors coming from other countries and cultures—not German native-speaking authors—that write in the German language.” Georgian-born novelist and playwright Nino Haratischwili, one of Unseld’s authors, comes to mind, as does Polish-born Margaret Stokowski. Her Untenrum Frei (Free Down There, but also something like “Pantsless”), just out from Rohwolt Berlin, is a story of sex, power, and feminism threaded through the personal experiences of young women growing up in Berlin.

“I think that in socially uneasy and exhausting times, people may pay a little more attention to books which contain not only a ‘world’ (as in novels, for example), but also decidedly tell something about the ‘true’ world,” observes Philipp Winkler. Here’s a memoir I’d like to read in German: What its like to spend a year at Tempelhof airport in a cubicle with twelve other people as a Syrian, Iraqi, Eritrean or Afghan refugee. I expect someone is working on such a story now.

Tara Bray Smith is the author of the memoir West of Then: A Mother, a Daughter, and a Journey Past Paradise, the novel Betwixt, and is currently working on a third book in Berlin, where she lives with her husband, the photographer Thomas Struth.

In Praise of the Illustrated Book 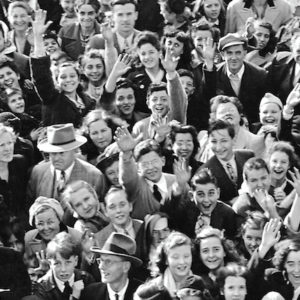 “The future belongs to crowds.” Decades later, the paranoiac pith of Don DeLillo’s Mao II pulses outward in smooth,...
© LitHub
Back to top