There’s No Place For Joy in Today’s Moscow

Moscow is emptying out. Friends, old flames, are leaving. There’s a strange light in familiar windows. Even the city itself, as a space of the memory, belongs now to a past epoch, estranged from many of us who remain.

Walking the streets of the Russian capital today, those of us who were born in the 1970s and 80s realize we were born in a country that no longer exists. We came of age of the 90s, when the Russia that existed then came to us freely, without conditions, like a gift from history. We were spoiled by fate; we felt it was enough to express ourselves in informal signs of community—we waved white ribbons in 2011 to protest flawed elections, but discovered that ribbons were no match for red tape—than in institutional forms of solidarity and democracy: we started few political parties, joined power in few professional unions or public organizations. And so it turned out it was enough for the atmosphere to change, and all of a sudden our generation could only watch; history closed in on us.

Today, it can be said that history is no longer the past, but is walking each step with us. We increasingly perceive uncomfortable parallels with the 1920s and 30s. That we debate which age we’re closer to—the terror of Lenin or the terror of Stalin—speaks volumes about our present situation.

There are images of life in Moscow today which recall images from an earlier time: “The house is sealed in silence now / Only the ticking of the clock. / But the hand won’t touch the switch / The light disturbs the anguish.” These lines were written by my great aunt, Tatyana Lebedeva, a few years before she died of starvation during the Siege of Leningrad. Her body would be buried in a mass grave in one of the city cemeteries. Her apartment would be ransacked, her belongings would disappear, and there would remain only a slim notebook filled with poetry, safeguarded by a friend.

“The house is sealed in silence now… ” The poem was dedicated to a parting with a beloved, but time impinges upon language, prescribes verbs: sealed. Because in the same months as the poem was written, the Soviet NKVD secret police had “sealed” the apartments of the arrested; exiting onto the stairwell, people saw wax stamps on their neighbors’ doors, doors of apartments from whence residents had been led away.

“The house is sealed in silence now… ” At the end of the 90s, having fallen in love myself, I read these lines, and the metaphor seemed striking. Today, 15 years later, it no longer seems so. It is: it’s my house that’s been sealed in silence.

The first thing that loses its voice is joy. You are swimming in the current of news. At first it horrifies you: whether it’s word of yet another raid on the offices of a human rights organization or a lawless arrest, you feel anger, alarm, indignation, fear. Then the feelings subside. You get used to them. But nonetheless there’s just no place for joy in today’s Moscow. At least not for sober-thinking people, despite the fabulous (though shrinking) wealth that has been amassed by a precious few; life transforms into exhausting slogs along dark Kafkaesque corridors.

Then your friends disappear. In 1998, having finished high school, I thought seriously about joining the army. My older friend, having served in the special forces, gave me a copy of Svetlana Alexievich’s Zinky Boys: Soviet Voices from the Afghanistan War. He handed it to me and said, “Read this before you decide.” I read it. And I forever parted ways with romantic notions of war.

When Alexievich received the Nobel Prize in Literature this past October, the same man who’d once performed a feat that had in a way set the course of my life—that same man said that Alexievich’s books are all lies, that she slanders Russia (presumably, in the service of the West). Many people cling to this inverted picture of the world, if only so as not to feel a strident loneliness in the midst of general unity.

Others are ready to plunge into the ecstasy of power, the ardor of loyalty—anything so long as they don’t feel the oncoming gloom. And many, of course, are ready to accept once again the propaganda of “Russia arising from its knees,”—She rises!—for that way at least there can be an ersatz future. The search for historical analogues invariably leads to 1937, the year of the Great Terror, when the mechanism of repression was built on the application of direct force—arrests, exile, executions; entire strata of the population were crossed out, subtracted from existence.

But today the practice of large-scale direct violence is no longer called for. With much success, the “soft” violence of the media has taken its place; a sophisticated brainwashing has advanced to a degree that Stalin’s government could never have dreamed of. After all, by 1937 the literacy rate in Russia was 75 percent; now everybody can watch (state-controlled) TV.

Those arrested during the Moscow protests against Putin’s government in the spring of 2012 generally received just a few years of prison time. The Ukrainian filmmaker Oleg Sentsov, arrested two years later in Crimea, got put behind bars for 20 years. The difference in severity can’t be explained by the legal code. This was a signal, a sign of the new times, a new yardstick of risk and fear.

And what’s most important is that today’s Russia already has behind her, in the chain of generations, a giant trauma that gets passed on anew. The physical terror of the 1930s is no longer necessary in Moscow. It’s enough for the past to keep reminding us of itself in order to actualize this atavistic fear; it is repression simply by means of the painful memory of repression. Thus for a person who was tortured long ago, it’s enough from time to time to hear the voice of his torturer, to hear that intonation forgotten long ago, in order to again lose the strength and the will for protest. Perhaps that’s one reason why Putin has set about reviving Stalin’s reputation in history textbooks used by children all around Russia.

Moscow has now become that house sealed in silence. And we are increasingly afraid to touch the switch and illuminate the dark corners of this city.

Sergei Lebedev was born in Moscow in 1981 and worked for seven years on geological expeditions in northern Russia and Central Asia. Lebedev is a poet, essayist and journalist. Oblivion, his first novel, has been translated into many languages. Lebedev’s second novel, Year of the Comet, is coming out from New Vessel Press in 2017. 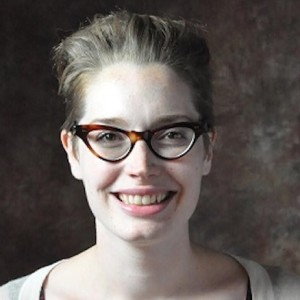 Stephanie Anderson is the Assistant Director for Public Services at the Darien Library. A former bookseller at WORD Brooklyn,...
© LitHub
Back to top