“There is Harm In Not Talking About It.” On the Power of Sharing Trauma Narratives

Memoirist and public health executive Michelle Bowdler, author of Is Rape a Crime? and novelist and family counselor Lynne Reeves Griffin, author of Dark Rivers to Cross, a novel about relationship violence, talk about writing trauma narratives with the power to bring pain deemed undiscussable out from the shadows.

Lynne Reeves Griffin: Your memoir is part personal story and part social, political commentary on the way sexual assault is handled differently than other violent crimes. Why did you choose to write about your trauma experience?

Michelle Bowdler: I never wanted to write about the details of what had happened to me, or the personal impact, without a larger story. What got me interested in looking at my own experiences after so many years was when stories started coming out about the tens of thousands of untested and un-investigated rape kits across the country. The backlog was astounding, yet rape is supposed to be a felony crime. Learning this kicked off my lifelong passion for social justice and feminism. I thought there’s something here that needs to be told. I began writing again, not only to talk about my trauma, but the broader issues.

LRG: If there’s anything writing can do, it’s to let people know that their singular experience is not unusual. It is shared. Whether I’m crafting a nonfiction essay or a novel length work, I write about disenfranchised grief to let people know they are not alone. I write as an expression of connectedness.

MB: Yes. I wanted to write a book that explored the reasons people do not feel a sense of closure, because of the ways in which over and over, society, law enforcement, the medical profession, and even our friends, misunderstand what leads to chronic post-traumatic stress. What impacts people in ways that they feel ashamed of, or that they consider their own unique failure. What I’d hoped to say is: this is who I am, this is my life, and this is what I experienced. And I wanted to juxtapose that with the research to try to explain how unresolved it felt. Even though I had built a life, had a family, went to graduate school, had a career and so forth.

LRG: What do you say when people ask how many of these stories do we need to hear?

If there’s anything writing can do, it’s to let people know that their singular experience is not unusual.

LRG: Exactly. You can’t have it both ways. You can’t silence people, but also not do anything to change our collective circumstances.

MB: If we say nothing, we acquiesce, and the people in power who benefit from things not changing think: “everything must be fine.” The only option we have if we want to make change is to speak out.

MB: I think we have to ask why others are so uncomfortable with the reality of these issues. It’s not my burden to be silenced. It’s your responsibility to understand something that is impacting a significant group of people. The data on suicide has not gotten better. The data on rape and assault has not gotten better. People getting any sort of justice or any sort of relief is not getting better, and yet the response is for us not to talk about a human event? That’s unacceptable. There is harm in not talking about it. We really have to look at why these things that are so prevalent are taboo.

LRG: I recently wrote about the loneliness I experienced in the aftermath of my sister’s death by suicide. The response was overwhelming. Countless people, privately holding great pain, reached out to share their stories. Why do you think society asks us to carry these very real and all too common grief experiences in silence? How does writing and reading about trauma move these undiscussable experiences out of the shadows?

MB: Traumatic events make us uncomfortable. But when people say my book was challenging to read, I get frustrated. I feel like saying, you know what’s challenging? Going through a life-altering trauma and feeling invisible. Which is why I made the decision I would write about the harm and the pain and the way people suffer in order for others to understand the societal implications, the impact and horror and the injustice of the disregard. I was old enough and my kids were grown, and I felt strong enough that I could be the person to do that.

LRG: And it is masterful. You’ve also written that you gave a lot of thought to having the word rape in your memoir title. I included a content warning at the beginning of my novel about relationship violence and inherited trauma to show empathy to the reader. I wanted to be respectful, to make it clear that the story may not be for everyone. But I also wasn’t going to shy away from the topic. What are your thoughts about being empathetic to the reader, while also being honest that the material may be triggering?

MB: My title was a big content warning in its own way. In the introduction, I invite the reader to go on this journey with me, recognizing that it may be difficult. Still, I explain why I’m asking the reader to do it.

It is a political act to speak one’s truth in a society where our basic rights are not respected.

LRG: It’s an exercise in empathy. The way that I see it, it’s better to be honest. To acknowledge that some readers may not be able to engage with it. Though I aim to sensitively explore the issue, and did not do so gratuitously, I’m also not going to hold back. I’m letting them know this is where we’re going.

MB: I love that reframe. There is a kindness about it. Every person has a full range of emotion, and this doesn’t cut off certain ones. It’s beautiful in that way.

LRG: As writers, it’s also important to be thoughtful in our narrative choices. I wrote the most difficult scenes in my novel in second person, to create some psychic distance. I wanted these painful moments to feel almost opaque, told at a remove. I didn’t feel the need to be graphic or to sensationalize the violence in any way. I made narrative choices with the reader in mind, but I still needed them to go there with me.

MB: This is also true in writing memoir. I had to decide exactly how I would handle the most troubling scenes. You can’t leave certain things out. It would not be true to the story if I did. But I had to find the right way to capture those details. I believe everything in my book is true, but that doesn’t mean I didn’t make all kinds of narrative choices.

LRG: My main character watches the unfolding of the William Kennedy Smith trial in 1991. Given the time period, she is unsurprised at the not-guilty verdict. How far have we come believing women’s stories over those of powerful men? Has the trauma narrative done anything to advance progress or move the cause for healing and justice forward?

MB: I wish I could say we’ve come a far way, but I think that the other thing that happened in 1991 was the Clarence Thomas hearings. Ted Kennedy was on the Senate Judiciary Committee. I remember him sitting there in utter silence. This man who pretended to make right some of his prior mistakes and support legislation for the disenfranchised. He was sitting silently while Anita Hill testified. Then fast forward to Kavanaugh’s confirmation hearing in 2018. Christine Blasey Ford’s account of sexual assault is beyond credible. And we later find out that there were other tips that the FBI was told to ignore. All these men are deciding cases about women’s bodily autonomy. So 50% of the population of this country, supposedly equal under the law, don’t have the same rights. In fact, our rights are being rolled back as we speak.

LRG: And this directly impacts our ability to read and write certain realities, as well as who gets to tell our stories.

MB: We cannot accept the silencing. Or accept the increased banning of books. For me, writing my book felt like a political act. It was something I could do. I believe that small gestures over time start to change lives. If we are silenced, and other people are shouting their hardest to keep the status quo going, we will be lost. So it is a political act to speak one’s truth in a society where our basic rights are not respected.

LRG: Despite the size of the ripple effect of any piece of writing, if there is even a handful of readers who feel stronger, who feel freer to talk about their deeply painful life changing experiences, it’s a beginning. We have to believe the burden will shift.

Lynne Reeves Griffin is an internationally recognized family counselor, public speaker, teacher and writer of fiction and non-fiction. Her work has appeared in Cognoscenti, Parents, Psychology Today, Solstice Literary Magazine, Chautauqua Journal, Craft Literary, Fiction Writers Review, Brain, Child and more. She regularly appears as a media guest expert to discuss contemporary family life and preventive mental health. She writes novels of domestic suspense as Lynne Reeves, with The Dangers of an Ordinary Night and Dark Rivers to Cross published by Crooked Lane Books.
Michelle Bowdler works in the public health and higher education fields on issues of addiction, violence prevention, mental health, sexual health, HIV education and prevention. She has been involved for over a decade working on social justice issues related to rape and crimes of violence. Her book, Is Rape a Crime: A Memoir, and Investigation and a Manifesto (2020 Flatiron Books) was longlisted for the National Book Award for Nonfiction and named a Must Read by Time Magazine and the Mass Center for the Book as well as on the best books lists of Publishers Weekly, the Boston Globe and Book Page. Michelle is a recipient of a Barbara Deming Memorial Award for non-fiction and has been a Fellow at MacDowell and Ragdale. She has been published in the New York Times, Ms. Magazine, Lit Hub, Hippocampus, and Brevity.

Consider the Lobster (and the Greenland Shark): On the Animals That Don’t Age 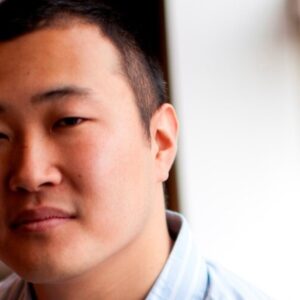 Matthew Salesses is the guest. His new book, The Sense of Wonder, is out now from Little Brown. Subscribe and download the episode,...
© LitHub
Back to top