The Yoga of Max’s Discontent 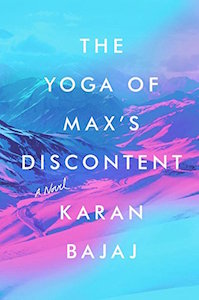 The following is from Karan Bajaj’s novel, The Yoga of Max's Discontent. Karan Bajaj is an Indian American author of three contemporary Indian novels, Keep Off the Grass, Johnny Gone Down and The Seeker. Bajaj's first novel, Keep Off the Grass, which became a bestseller with more than 70,000 copies sold in the year of release, was a semi-finalist for the Amazon Breakthrough Novel Award and was longlisted for the Indiaplaza Golden Quill Award.

Max’s mother died the next day, finally free from the kidney cancer that had spread to her uterus, bladder, liver, bones, and lungs over the past three years. A week later, Max and Sophia held her memorial service at the St. Ann’s Episcopal Church. They briefly considered holding the service in the St. George–St. Demetrios Greek Orthodox Church in Spanish Harlem, but his mother hadn’t identified with the Orthodox faith, just as she hadn’t fasted at Lent or sought any Greek family in the United States. “Talking of past is like two birds sitting and knitting sweater. Fool’s daydreams. You think only of future,” she had said in her halting English whenever Max and Sophia asked her too many questions about her childhood. Not that it mattered. Orthodox or Episcopal, everyone ended in some spot under the earth. At least she had died a natural death. A life not cut short by a shooting or an overdose was a minor blessing in the projects.

On his way back from the Columbus Circle subway station after her memorial service that evening, Max saw the Indian food cart guy from a week before standing on a small stool in front of the open-​­air cart, still naked from the waist up. He was scraping snow from the cart’s tin roof, a look of complete absorption on his face. Max hesitated, then removed his overcoat and walked up to the cart, shivering in his sweater.

The man saw Max and smiled. “From the other night, yes?” he said, getting off the stool.

Max nodded. “I came to give you this.” Max handed him the overcoat. “It’s very cold here.”

The man laughed and his eyes lit up. “Thank you for caring, sir, but I am not in need of a coat.”

“Please. Just a small gift from my sister and me. It’s not safe to be like that in the winters in New York.”

“Indeed, sir, that is very considerate, but I am very fine indeed,” he said. “Please believe me when I say I can buy a coat for myself. I have been in America for one whole month, but I have not felt cold here. It is much colder where I come from.”

Max put his coat back on and huddled closer to the warm cart. “I didn’t know it was that cold in India,” he said. “I mean, you are from India, aren’t you?”

The man nodded. He pulled a mug of water from the metal tank under the grill surface and washed the grill.

“India is a big country, sir. I am from the mountains, up, very far up in the Himalayas beyond Kashmir, where people rarely visit,” he said. He splattered oil on the grill. “Will you have something to eat, sir?”

Eight pm. Max was restarting work the next day after a week off, and he hadn’t slept well for several nights. But he felt like talking to someone who didn’t know of his mother’s death and wouldn’t offer unwanted condolences and homilies.

“Sit, sit, sir,” said the man. He wiped the stool outside the cart with a dry white cloth. “You are tall for my small cart, sir.”

Viveka took falafel from one of the stainless steel containers on the shelf and put it on the grill. The falafel sizzled. Just inhaling the hot metal smell made Max shiver less. Viveka broke the falafel gently with his tongs, snowflakes falling on his naked back.

Max shook his frozen fingers. “You must feel at least a little cold,” he said.

Viveka looked up from the grill. “Oh, me, no, not at all, sir,” he said. “If you live in cold weather for long, your body changes. And I am nothing. The Himalayan yogis sit in their caves wearing nothing for months even when the temperature drops to thirty or forty degrees below zero—much, much lower than here.”

“But that’s just a myth,” said Max. “No one has actually seen them.”

Viveka put the tongs down. He raised his eyebrows. “Why, I have, sir. Indeed I have. Every day for years and years.”

“Up in the Himalayas?” said Max.

“Can anyone see them?” said Max. “Just like that? You hike up the mountains and there they are sitting in the caves?”

“Oh no, no, sir, very much the opposite. Indeed, the yogis do not want contact with people,” he said. He began chopping the onions again. “I grew up in the Himalayas, but I did not even see them until the army posted me up on Siachen Glacier, the highest military base in the world, more than twenty thousand feet above sea level. You could get there only on helicopter. There were just some of us in the Indian army station, a few Pakistani soldiers across the border, and the yogis sitting meditating in the caves nearby. It was a miracle how they got there on foot.” He shook his head. “Very unusual people, sir. Indeed, I did not even understand the things I saw in those years until much later.”

Max didn’t fancy hearing about more religious nutters after listening to hymns praising God’s infinite mercy and justice at the memorial service that day. But he was vaguely interested in meditation, as were some others in the private equity firm he worked at on Wall Street.

“What are they meditating on?” said Max.

“These are things I do not know very well, sir,” said Viveka.

“Why are they at the top of the Himalayas? Why don’t they live in a more comfortable place?”

“The silence, the solitude, is necessary for concentration,” said Viveka.

Viveka picked up a bottle of tahini. “They believe—and it is not my belief, sir, so please do not misunderstand me—that the whole world exists in opposites: up and down, cold and hot, darkness and light, night and day, summer and winter, growth and decay. So if there is birth, age, suffering, sorrow, and death, then there must be something that is unborn, un­aging, un‑ailing, sorrowless, and deathless—immortal, as it were. They want to find it. Not just believe in it on faith or scripture, but see it face ­to ­face.”

Max leaned forward on the stool, curiously moved by the words. “And do they find this thing?”

“I do not know, sir, but I’ve seen things with these very eyes that would make one believe almost anything.”

Viveka added the tahini to the falafel. The mixture sizzled. A drop of hot oil splashed on Max’s neck. He welcomed the burning sensation, a brief respite from the wind. Viveka mixed red and white sauce into the falafel with a large spoon, scooped it in a pita, and handed it to Max.

Max took a bite. “Very good,” he said. “You were talking about the yogis?”

Viveka hesitated. “My daughter’s husband grew up here in Queens. He tells me not to speak of such things in this country, sir,” he said.

Max put his paper plate down on the top of the beverage cooler. “Please tell me. I want to know.”

From THE YOGA OF MAX’S DISCONTENT. Used with permission of Riverhead Books. Copyright © 2016 by Karan Bajaj. 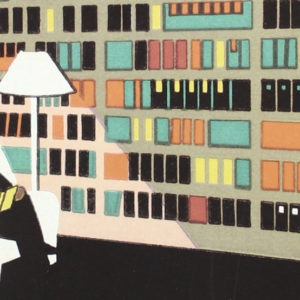 Kazuki Agarie's Quiet Dignity: On Translating Stoner in Japan In the West, people talk about translators’ invisibility, but in Japan translators are fairly visible. Many readers pay attention...
© LitHub
Back to top