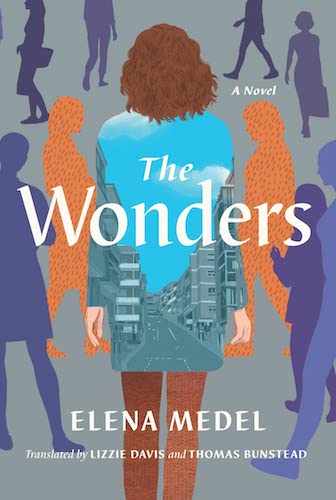 The following is excerpted from Elena Medel's debut novel, The Wonders, translated by Lizzie Davis and Thomas Bunstead. Medel is a Spanish poet and the founder and publisher of La Bella Varsovia, an independent poetry publishing house. She is the first woman to win the prestigious Francisco Umbral Prize. Lizzie Davis is a translator and an editor at Coffee House Press. Thomas Bunstead has translated Enrique Vila-Matas, Aixa de la Cruz, Eduardo Halfon, Yuri Herrera, and Rodrigo Fresán.

The baby smells of cigarettes. The first thing María notices when she picks Carmen up is that she doesn’t smell anything like the other babies. The neighbors’ daughter, in the apartment next to her aunt and uncle’s, sometimes smells like onions, though the mother tries to cover it up with perfume; but the little boy at her place—the place where she works, María catches herself, not her own place, there’s no such thing—is a few months older than her daughter, and he has a sweet scent. It’s hard for María to explain—what is “a sweet scent”?—since she’d never come across anything like it, but now she picks it out in shops, in cafés. The neighbors’ daughter plays with the pots and pans in the afternoon, and the boy divides his time between the crib and the portable playpen in the living room; Carmen has her own way of moving through the house, from the bedroom to the arms of her grandmother, who sits at the big table. María realizes maybe the smell of cigarettes has something to do with her family. Her mother smokes in the kitchen; her father smokes constantly; and she suspects that her brother Chico has taken to smoking in the bedroom, trusting he won’t be found out. Carmen smells of cigarettes; maybe it feels to María like her daughter smells of that two-bedroom house, or maybe it’s just the strangeness of sleeping there next to her.

Carmen turned one a few weeks ago, and María is home for the first time since she moved away: on the bus, she rehearsed the words she would use to describe the wide streets of Madrid, the gaps she would insert in place of the neighborhoods her aunt and uncle had implored her to avoid. She tried to strike up a conversation with the woman in the seat next to hers, talked about the weather and the differences between the two cities—the avenues, the areas people tell you to stay away from—but in return María got gibberish, monosyllables, one cliché or another. Downtime frightened her; she needed to fill it somehow. She fell asleep at points, or watched the landscape changing color: the coarse yellow soil looked more and more scorched the farther south they went.

While her daughter naps, María tries to rest, but she only gets as far as lying down on her side, eyes open, gaze fixed on the rise and fall of her chest. She whiles the time away looking for her features in Carmen’s. She had remembered the soft little hands, but she’d forgotten all about that uneven chin—she has such a complex about her own.

Carmen barely has any hair—it’s brown, like her father’s— and the little she has is so fine that María tries to avoid touching it, afraid that it might disintegrate. She’s smaller than María thought—much smaller than the boy she takes care of—and her belly is still swollen. She accepts that the very pale skin must have come from her mother’s side, and she has no trouble imagining her a few years younger than María is now, veins showing through on her arms and her chest. She wishes Carmen better luck.

In her memory, the entire length of her daughter fits in her open arms; she’s too big for that nowadays, and María carries her on one hip instead. It’s funny, María will think many years from now, how memory generates its own fictions: how what hasn’t stayed with us, because we think it insignificant or because it doesn’t align with our expectations, gets filled in with what we wish had happened instead. During the day, she cooks and cleans and irons and follows orders, but she sets nighttime aside for memory. Before she falls asleep, she takes herself back to her parents’ house, its layout: when you go inside, there’s the small entryway for hanging coats, her parents’ room is on the left—the wooden headboard, the blinds almost always lowered. When the house was turned over to them, there was a living room in that space, and it’s not hard for María to remember the hastily erected partitions. On the right is the room she shared with the siblings closer to her in age, Soledad and Chico, and in earlier times, with the older ones.

At the back, the kitchen with the big table, and beyond that, the backyard and the toilet, which originally had been a hole in the ground—the weight of the bucket in the corner, full to the brim with water, don’t forget to empty it first and fill it up after for whoever comes next. They took apart her bed, and the girl’s crib now stands in its place: the same crib where her nieces, now nearly teenagers, slept, where her little brother slept. Now, eyes closed, she allows herself to revise certain moments: she doesn’t get on that bus, doesn’t say hello to that man, doesn’t go inside that house.

María wishes she had some of the photographs she chose not to bring along when she left for Madrid, now that she’s struggling to recall people’s faces clearly. She kept one old photo in her suitcase—her with her dad and her sister, in the backyard—and she sometimes becomes absorbed in the way the black and white of the image makes certain marks on the wall behind them stand out. A few months after she got to Madrid, her mother sent a letter she had dictated to Chico: it made her laugh to see the careful handwriting of the first lines, accelerating in the second paragraph, the misshapen calligraphy of Take care. Her mother had included one other photograph: in it, one of her nephews was posing in front of a birthday cake, and as Chico smeared Carmen’s nose with meringue, her mother sheltered the girl in her lap, cradling her head tenderly. María put it on her nightstand. She guessed that was what they had sent it for. But she put it there as a warning to her aunt: she shouldn’t be fooled by her obedience. Sure, she might jump out of bed at dawn, she might cook dinner or clean the bathrooms as soon as she gets home from work, but the truth is in the photograph.

When the girl wakes up, María looks into Carmen’s eyes: two black pinheads. The baby stretches, and María reacts: she sits up at the foot of the bed and cranes her neck to peer into the crib. María has grown used to the way the boy in the house twists her arm, to joking around with the neighbors’ daughter; but Carmen, being hers, seems made of different stuff. Carmen shifts as if she wants to sit up: she shakes her legs, just a little at first, kicking when that doesn’t work; she waves her arms, casts around for María’s eyes. Finally, María stands and goes to the crib, picks up her daughter—that cigarette smell—and gathers her in her arms. Her affection induces no response in the girl. She’s not kicking anymore, but she extends her little right arm. María thinks Carmen must be pointing to a threadbare stuffed animal in the corner of the bedroom. How proud she feels in that moment: Carmen is clever enough to access her memories and locate herself within them, mature enough to try to show off her toys. Is that it? Is that what’s happening, or is María projecting something completely imaginary? Still holding Carmen, María picks up the stuffed animal and hands it to her, but the girl smacks it away: there are no tears, no shrieks, although the baby’s movements take on a brusqueness. María takes her little left hand and places it on her chest. “Mommy,” she calls herself; “Mommy,” she repeats, though she knows that to Carmen, she may as well be a stranger. Carmen continues reaching out her right arm, pointing to something María doesn’t see.

From The Wonders by Elena Medel, translated by Lizzie Davis and Thomas Bunstead. Reprinted by permission of Algonquin Books of Chapel Hill. Copyright © 2022 by Elena Medel. All rights reserved. 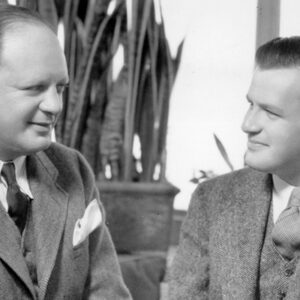 Nick Davis on Writing Himself Into a Biography–And Taking Himself Out In this episode of Just the Right Book with Roxanne Coady, Nick Davis joins Roxanne Coady to discuss his latest book, Competing...
© LitHub
Back to top