My son recently turned four; at some point during his third year, apropos of nothing, he declared to me that we had to stick together. I assured him we would. He replied, “But we need more sticks.”

One thrill of having children is watching them formulate an understanding of how the world works and coming up with a personalized grammar that expresses their understanding. As a parent you catch glimpses of it throughout a day: the pauses in a stream-of-consciousness monologue as thoughts are ordered in the kid’s head; arched eyebrows to emphasize sarcasm; pursed lips of wonderment as the cat bats around a little plastic dinosaur. But the ritual of stories before bed is perhaps the most intimate and revealing period of time where through reading books out loud children connect the events taking place on the pages to their lives on levels they might not yet be able to articulate fully, though they can feel the truth of the matter.

It’s not a revelation that Maurice Sendak channeled his uncanny understanding of our psyches into his outrageously popular and best-selling picture books. I fondly remember listening to and looking at Where the Wild Things Are and In the Night Kitchen when I was a kid. When I read Where the Wild Things Are to my son I become my mom, rumbling the wordless two-page spreads of Max presiding over the wild rumpus, growling “Rumpus, rumpus, rumpus,” tilting the book back and forth as if on the choppy sea. And as a boy I marveled at Mickey’s naked, milk-soaked, doughy exploits through the Night Kitchen, which my son envies because of his bizarre taste for raw dough. He also welcomes every opportunity to point our Mickey’s “peener,” or “weenis,” if you will.

Sendak attracted a bevy of criticism when these books were published, in 1963 and 1970 respectively, which proves that they are about much more than rambunctious children. Those whom found no virtue in stories featuring a boy who threatened to eat his mother, or a boy displaying not one iota of shame being naked, were ignoring what Sendak knew all too well: “What [children] most yearn for is a bit of truth.” In an interview with Nat Hentoff, Sendak said, “Too many parents and too many writers of children’s books don’t respect the fact that kids know a great deal and suffer a great deal. . . . I am trying to draw the way children feel.”

In There’s A Mystery There: The Primal Vision of Maurice Sendak, Jonathan Cott unpacks Outside Over There, relying on the extensive archive of interviews he conducted, starting in 1976 when he first wrote about Sendak for Rolling Stone, lengthy conversations with experts on Freud, Jung, and art history, as well as playwright Tony Kushner. Sendak considered Outside Over There the final installment of the trilogy he started with Where the Wild Things Are. No one ever read this book to me. Published in 1981, I was five and read to every night. It’s possible that my parents just didn’t know that there was a new Sendak book available. Or perhaps they thought I wouldn’t like the dark tale of a dangerously distant mother, a kidnapped baby, and melting goblins. The book garnered high praise at the time, including a National Book Award, but its 18th-century Northern Romantic visual style shares nothing in common with the cross-hatched etching and comics aesthetics of Sendak’s previous two books, already considered bona fide classics. Today, in my local library there is only one copy in circulation; the library holds several copies of the two other titles in the trilogy, and they are often all checked out.

In Sendak’s words, these three books are “variations on the same theme: how children master various feelings—anger, boredom, fear, frustration, jealousy—and manage to come to grips with the reality of their lives.” The first two books exacted an emotional toll on Sendak, but Outside Over There found him falling “off the ladder that goes down deep into the unconscious,” causing a “mental collapse.” Cott’s book considers Outside Over There under a casually conversational but illuminating scrutiny of close reads across disciplines not typically thought of in the context of children’s books. The rigor rightfully makes the case for the story to be considered first as a work of art.

Sendak was younger than my son when aviator Charles Lindbergh’s boy was kidnapped in 1932. But even at three-and-a-half he recalled shopping with his mother and seeing the newspaper with the “hideous photograph of the decaying remains of the child amid a tangle of leaves, and the newspaper had printed an enormous arrow that pointed to the fractured skull.” This memory haunted Sendak and is one of the several childhood traumas he carried with him for the rest of his life and continually tried to process, making death and loss dominant themes in his work.

So it is no surprise that loss is the explicit central theme in the book Sendak considered his masterpiece. The first two pages of the story show Ida and her mother standing on a stony coastline, watching ships under sail in the harbor; Ida holds her sister, who faces the reader. All three females appear oblivious to two mysterious cloaked and hooded figures to their left—the feminine presence is a key component to how Outside Over There is picked apart in Cott’s book; Jungian analyst Margaret Klenck posits that “developmentally Sendak went all the way back into the womb.” The text reads: “When Papa was away at sea.” On the following page, the mysterious figures, who we will soon learn are goblins, are carrying a ladder as the despondent mother sits in the arbor and Ida holds her crying sister. Becoming a parent to her sister because their actual parents aren’t capable of fulfilling those roles, Ida plays her “wonder horn” but is not watching her charge, and she is abducted by the goblins. When Ida realizes what’s happened she sets off to recover her sister, which she does only after receiving words of wisdom from her absent father, “heard at last from off the sea.”

Responding to a Ralph Eugene Meatyard photograph of a weathered cherubic statue with features smoothed out by time, Alexander Nemerov, as he does several times in American Mystic, a recent catalog of Meatyard’s work, strikes a Sendakian note, reminding readers that “disappearance is a condition of possibility, too.”

As Cott’s book makes clear, a great deal is known about Sendak’s life, from his childhood moving around Bensonhurst, Brooklyn, with his Polish immigrant parents to his early artistic influences and his later-in-life tendencies to collect Herman Melville memorabilia. The scope of biographic knowledge about Meatyard is far more limited. How his childhood shaped his—artistic practice is not so clear. What is known, however, is that the career optician in Lexington, Kentucky, bought his first camera in 1950 when his eldest son was born. Meatyard often conscripted his family—daughter Melissa, sons Christopher and Michael, wife Madelyn—as the central figures in photographs that often look and feel like snippets of vaguely familiar dreams that are impossible to decipher. American Mystic reproduces these photographs, which are accompanied by Nemerov’s often pithy and, at times, enigmatic texts—“The wisdom of the picture is autistic”—as if breadcrumbs through an enchanted but slightly unnerving forest in which you are sure to get lost, especially if you attempt to return the way you came.

Meatyard, whose first book of photography was published in 1974, two years after dying from cancer, started as a curious amateur photographer who became part of a creative community that included Thomas Merton and Wendell Berry. Yet, very little is known about why the images he made took shape. Meatyard’s most recognizable works are the shots of his family wearing grotesque disfigured latex masks. One such photograph, which is found on this book’s cover, is called “Romance (N.) from Ambrose Bierce, #3, 1962.” In Bierce’s Devil’s Dictionary “romance” is defined as “Fiction that owes no allegiance to the God of Things as They Are.” Meatyard believed that masks freed people from the confines of their perceived identities; they covered his subjects’ differences and enabled this wonderful concept of “romance” that focused on the creation of a moment, its greatest virtue being beguiling contrivance.

American Mystic offers a wide range of Meatyard’s work, making clear how the tension of expectations delineating reality and imagination is the taut, thrilling through-line that connects his photographs. In showing them to my son, he was drawn to the masked children, and a series of untitled abstract photographs of light on water, which made him think of furiously waving around a flashlight in the dark. Movement is certainly at play in these images and what makes them exciting, regardless of your age, is that sensation of simultaneously knowing and not knowing what you are looking at. This is the state of childhood. As we grow older we spend too much time either knowing or not knowing, but to hold both feelings at once becomes conflicting so too often we avoid it.

In Outside Over There, Ida makes “a serious mistake. She climbed backwards out her window into outside over there.” When I first read the book to my son, he balked at this assessment, insisting that Ida’s error was not noticing when the goblins first took her sister. He made me leaf back through the pages until we found the scene where Ida’s sister is taken away. Here was her literal mistake. If I tried to explain to him that Sendak’s story works on multiple levels, that, in Sendak’s words, the “book is like a mirror reflection: it’s called Outside Over There, but if you hold the title up to the mirror, so to speak, it says Inside in Here. . . . And one of the clues to the book’s meaning is to reverse everything that happens,” he’d shrug and say, “Yeah, but look, Ida’s not watching her sister.” He’d be right, and Sendak would not deny him that.

Beyond Sendak’s artistic intentions, my son certainly has no appreciation for the Freudian and Jungian implications of the analyses Cott facilitates in There’s a Mystery There. And I am certain that when Meatyard told his children to perch on a slab of rock in the crunchy leaf-underfoot forest of late autumn wearing masks they were not thinking about passages by William Blake or Louis Zukofsky their father had underlined. So while the resultant photographs were printed, they probably saw another family weekend outing, and not images fueled by Wittgenstein’s belief that there are things “which cannot be said, only shown.”

These two books demonstrate how Maurice Sendak and Ralph Eugene Meatyard tapped in to a sweet spot of creative freedom that for them inspired creative clarity but for viewers bestowed empowering ambiguity. Both bodies of work can only be understood when we remember to internalize how we are made to feel, not how we are made to think. We should all remember to surrender ourselves to these wordless, primal feelings, like children who do it so naturally because it is all they know.

Americans in Search of Utopia

7 Questions for Ian Buruma, New Editor of the New York Review of Books 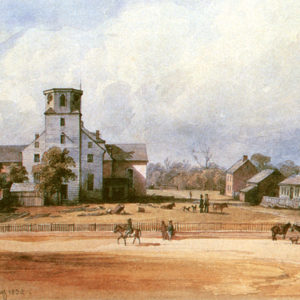 Americans in Search of Utopia