Seyward Darby on the Quiet Army of the Far Right

There were so many women there!

I’ve heard this exclamation more times than I can count in the wake of January 6, as law enforcement and the media have identified participants in the most serious breach of the US Capitol in more than two centuries.

Jenna Ryan, a real estate broker from Frisco, Texas, arrived by private plane to disrupt democracy. Corinne Lee Montoni of Lakeland, Florida, shouted as she marched into the fray, “This is our house… Let’s go!” Annie Howell of Swoyersville, Pennsylvania, was captured on camera wearing a “Keep America Great” ball cap, but later claimed online, in keeping with a widely circulated lie, “ANTIFA LEADER IS THE ONE WHO BROKE INTO THE CAPITAL [sic]!” Therese Duke, who was punched in the face when she tried to snatch a Black security guard’s cell phone, was outed on social media when her daughter, Helena, tweeted footage of the encounter. (“hi mom,” Helena wrote, “remember the time you told me I shouldn’t go to BLM protests bc they could get violent… this you?”)

And then there was Ashli Babbitt, the 35-year-old Air Force veteran shot and killed by police as she attempted to climb through an interior door of the Capitol. Not long before her death, Babbitt tweeted, “Nothing will stop us… they can try and try and try but the storm is here.” This was a reference to of QAnon, the movement centered around the conspiracy theory that Satan-worshipping, cannibalistic elites run a global sex-trafficking operation, which a messianic Donald Trump was positioned as president to destroy. Babbitt, a Q believer, has been valorized since her death, mourned by supporters of the coup attempt as a martyr to a righteous cause.

Many more daughters, mothers, and sisters entered the Capitol on January 6. According to the Program on Extremism at George Washington University, as of this writing, legal cases have been brought against 88 women—compared with 566 men—who took part in the insurrection. Plenty more haven’t been charged, arrested, or even identified. But joining the violent mob in the Capitol wasn’t the only way women participated that day. They played other roles—crucial ones.

Less than a year after the coup attempt, there are women vying for plum roles in the Trumpist landscape.

Shortly before the storming, there was a rally near the Capitol, organized by Women for America First, a pro-Trump group helmed by a mother-daughter team: Amy and Kylie Kremer. Donald Trump himself delivered a speech at the rally, inciting his supporters to act. Amy Kremer, who cut her political teeth as a leader of the erstwhile Tea Party movement, spoke too. “We know that there was voter fraud, we absolutely know it and that’s why we’re here, to stop the steal,” she told the crowd. “You guys, we cannot back down.” By then, the Kremers had been hard at work for several weeks. Women for America First had staged a 20-stop bus tour across the country, promoting disinformation about the election and fomenting outrage. A now-deleted website about the tour stated, “We will do whatever it takes to ensure the integrity of this election for the good of the nation.” (After the insurrection, Women for America First released a statement denouncing violence; the Kremers and several other women who helped organize the January 6 rally have since been subpoenaed by the congressional committee investigating the coup attempt.)

There were so many women there!

What’s striking isn’t the statement’s verity—it’s the air of disbelief with which people tend to say it, as if defiance of democratic norms and progressive ideals is men’s work. The sense of surprise is frustratingly familiar. It colored many people’s reactions to 2016, when Trump won a plurality of white women’s votes; to 2020, when history repeated itself; and to 2021, when white women ensured that a Republican became the next governor of Virginia. How could they? That’s what the incredulous camp wants to know about white women who support racist, sexist politics and the people peddling it.

The better question is, Why wouldn’t they?

For all the ways it was historic, the insurrection was also predictable, and not only because Trump’s most fervent acolytes telegraphed on social media and at political rallies exactly what they were going to do. The violence was the manifestation of a long-held right-wing fantasy in which supposedly patriotic white Americans rise up and reclaim what they believe to be their country. This pipe dream has been regurgitated since at least the Civil War by proponents of white supremacy, feeding on entrenched mythologies and simmering resentments shared by a large swathe of white America. It was only a matter of time before—accelerated by a charismatic leader, seismic social change, and powerful engines of disinformation—it burst into mainstream consciousness.

What happened on January 6, in other words, wasn’t a blip. It was plotted—chaotically, yes, but also relentlessly.

Research conducted at the University of Chicago in early 2021 found that more than 90 percent of the people arrested or charged in connection with the events of January 6 are white. More telling is another data point: According to political scientist Robert Pape, “the people alleged by authorities to have taken the law into their hands on January 6 typically hail from places where non-white populations are growing fastest.” Based on national surveys, what fuels their rage is a fear of “the Great Replacement.” Researchers of white nationalism know this concept all too well: Right-wing extremists have long warned that America’s white majority is being systematically, even intentionally, diminished by mass immigration and low birth rates.

Fear of racial replacement is the beating heart of Trumpism, the populist politics of white anxiety and resentment that sent people charging into the Capitol building. Trumpism prioritizes white needs and wants over collective well-being, and white feeling over hard fact. Permissive of white bigotry and cruelty, it forces a narrow vision of America onto policymaking and storytelling.

Why aren’t women taken seriously as right-wing actors and threats?

Women are key arbiters of Trumpism, just as they have been of previous iterations of white supremacy. Before Amy and Kylie Kremer, there was Phyllis Schlafly, who notoriously mustered a conservative women’s movement powerful enough to knock second-wave feminism on its heels and usher in the regressive politics of the Reagan era. Before the women who stormed the Capitol to derail a constitutional process, there was the Mother’s League in Little Rock, Arkansas, a group that, three years after Brown v. Board, circulated petitions and organized rallies in support of segregation, triumphing when city residents voted to close schools in 1958 rather than continue the integration process.

And before Ashli Babbitt, there was Vicki Weaver, wife of Randy Weaver, shot and killed by federal agents in the 1992 standoff at Ruby Ridge. Far from a bystander or a mere helpmeet to her husband, Vicki was steeped in anti-government literature and conspiratorial thinking, a woman who once wrote in a letter to a US Attorney, “Do you hear the approaching thunder? It is that of the awakened Saxon. War is upon the land. The tyrants [sic] blood will flow.”

Yet powerful people and institutions—many of them white-dominated—have failed time and again to recognize women’s roles in championing white supremacy. In some cases, they have conveniently forgotten about women’s contributions until after the fact, when the damage is done and seared into history. Indeed, disbelief about female complicity in the worst forms of bigotry stretches across time and cultures.

Feminist historians of the Holocaust have documented the postwar fable of “the apolitical woman,” a victim of the Third Reich even if, as a proud German, she participated in its work. “Very few women were prosecuted after the war; even fewer were judged and convicted,” writes Wendy Lower. “Many of the female defendants, especially those who appeared matronly and meek, did not seem capable of committing such atrocities.” As a result, Lower concludes, “most got away with murder.”

Similarly, many historians of the antebellum South posited that white women benefited only indirectly from slavery and that their patriarchal culture’s veneration of femininity meant that they couldn’t have participated in the worst aspects of human bondage. They were Scarlett O’Hara: cherished, cosseted, even glamorous.

But in 2019, drawing on thousands of interviews with former slaves conducted during the New Deal by the Federal Writers’ Project, historian Stephanie E. Jones-Rogers revealed how deeply implicated white women were in the system of buying, selling, and exploiting black bodies. “When we listen to what enslaved people had to say about white women and slave mastery, we find that they articulated quite clearly their belief that slave-owning women governed their slaves in the same ways that white men did,” Jones-Rogers writes. “Sometimes they were more effective at slave management or they used more brutal methods of discipline than their husbands did.”

Why, historically, haven’t women been taken seriously as right-wing actors and threats? The reasons are complex, but at root they’re sexist. Women are underestimated because of how they look, speak, and act; because of what they value; and because the venues where they often amass influence—homes, school boards, and, lately, online communities—are deemed trivial in comparison to the traditional halls of power. Sexism is always a wrong done, and in this case it redounds: It blinds the people it afflicts to women’s pernicious and sustaining contributions to white extremism.

Less than a year after the coup attempt, there are women vying for plum roles in the Trumpist landscape: South Dakota Governor Kristi Noem, for instance, and Las Vegas city councilwoman Michele Fiore, who recently announced a gubernatorial run with a campaign ad in which she drives a truck with a Trump 2024 sticker slapped on the back. Other women—including the Kremers—have besieged election commissions, schools boards, and other local bodies from California to Georgia, Montana to Virginia, battling the three bogeymen of an imaginary American apocalypse: vaccine mandates, critical race theory, and voter fraud. One of these women, or more likely one taking cues from them, may well be the next Trump—the next national leader to harness white anger and fear in service of a racist agenda.

If this happens, there will surely be a public narrative about how the woman’s rise to power came out of the blue: What a shock! In truth, though, for anyone willing to pay attention, a female Trump will always have been an inevitability. 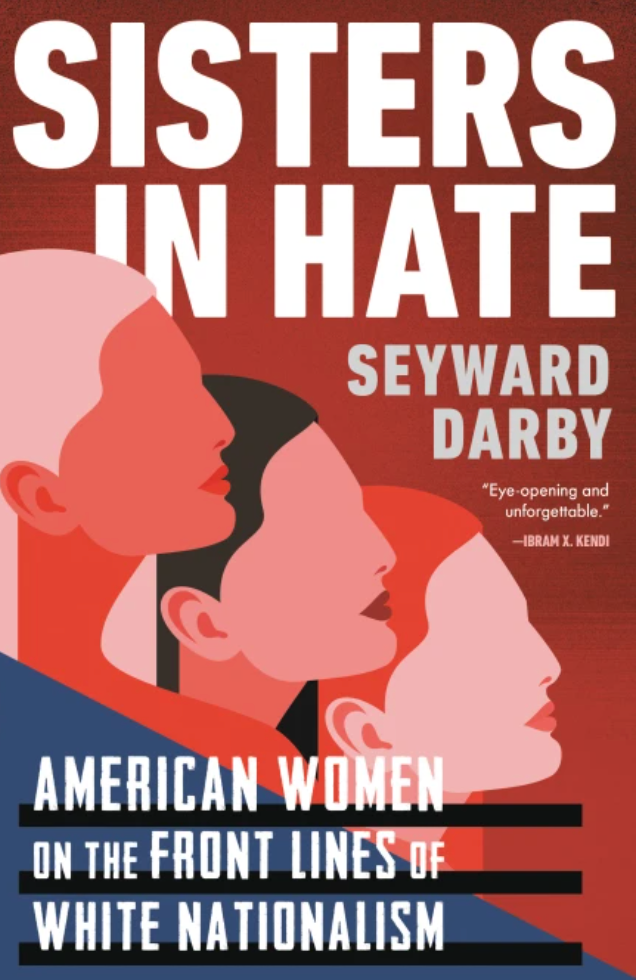 Seyward Darby is the author of Sisters in Hate: American Women and White Extremism. The book was shortlisted for the J. Anthony Lukas Book Prize in 2021. Darby is the editor in chief of The Atavist Magazine. She has written for publications including The New York Times, The Guardian, and Harper’s, and she co-hosted the narrative podcast No Place Like Home (Cadence 13). 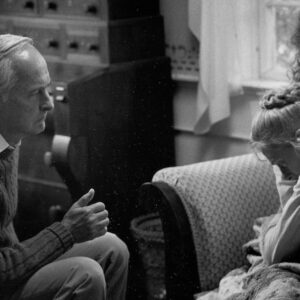 Above: James Ivory with Madeline Potter and Vanessa Redgrave on the set of The Bostonians (From the collection of James Ivory) Ask...
© LitHub
Back to top
Loading Comments...