This week in literary film and television news, there was a lot to get excited about. Studios are setting timely (perhaps disturbingly so) SF and dystopian stories in motion, from the classic (JG Ballard, Ursula K. Le Guin) to the contemporary (Megan Hunter, George R. R. Martin). A number of exciting collaborations are gearing up, from Jordan Peele and J.J. Abrams adapting Matt Ruff to Marjane Satrapi and Jack Thorne adapting Lauren Redniss. Plus a reported piece that opens up a My Brilliant Friend casting call, news about Philip K. Dick’s Electric Dreams and Stanley Tucci’s film about James Lord and Alberto Giacometti, as well as first look images from I Kill Giants and The Guernsey Literary and Potato Peel Pie Society, and a brand new trailer for The Glass Castle. So take your mind off the horrifying news coming from Washington, and comfort yourself with some pleasing literary news coming from Hollywood. You won’t regret it.

A new kind of Ferrante Fever has emerged in Naples—among kids who have never read her book. In The New York Times, Jason Horowitz reports from the scene of an open casting call for HBO and RAI’s adaptation of Elena Ferrante’s My Brilliant Friend in Naples:

In a throwback effort at authenticity, producers are looking for amateur child actors—two sets of girls in 8- and 15-year-old iterations, and then a large Annie-esque supporting cast of hard-knock lifers. The result is an open casting call that has already drawn 5,000 children, the vast majority of whom have never heard of Elena Ferrante, and injected a mix of hysteria and hope into parts of Naples that are poor in resources but rich in real characters.

Fox Searchlight has picked up the distribution rights to Robert Redford’s Old Man and the Gun (spot-on title for a heist movie), based on David Grann’s 2003 story in The New Yorker. In addition to Redford, the film stars Casey Affleck,  Sissy Spacek, Danny Glover, Tom Waits and Tika Sumpter.

SunnyMarch, Benedict Cumberbatch’s production company, and Hera Pictures have acquired the feature film rights to The End We Start From, Megan Hunter’s debut novel (published this week in the UK; forthcoming this fall in the US). The book is set after a massive flood dunks London and a woman and her newborn child suddenly become refugees. Financial Times called it “reminiscent of Cormac McCarthy’s The Road, in that it shares the same narrative detachment, and the same precise poetry.” As for the Cumberbunny himself, he described the book as s “a stunning tale of motherhood…Megan has crafted a striking and frighteningly real story of a family fighting for survival that will make everyone stop and think about what kind of planet we are leaving behind for our children. We’re beyond thrilled to be bringing this story to life.” Here’s hoping they also change the title.

Another week, another bit of Philip K. Dick’s Electric Dreams casting news: Richard Madden (RIP Robb Stark), Holiday Grainger, and Anneika Rose have signed on to star in an episode together. The episode in question is titled “The Hood Maker,” and according to Deadline “is set in a world without advanced technology and where mutant telepaths have become humanity’s only mechanism for long-distance communication. But their powers have unintended implications, and when the public begins to embrace mysterious, telepath-blocking hoods, two detectives with an entangled past are brought in to investigate.”

The latest news that made me go ooooooh: Ridley Scott is producing an adaptation of JG Ballard’s 1981 novel Hello America for Netflix. Hello America being creepily timely, involving as it does an expedition into a ruined, abandoned America and a psychopath claiming to president.

Also in the ooooooh department is the news that Jordan Peele is producing a new TV show for HBO, teaming up with J.J. Abrams’ Bad Robot and Warner Bros Television to adapt Matt Ruff’s Lovecraft Country, which came out earlier this year. The novel follows a young black man on a journey through Jim Crow America, searching for his missing father and soon coming up against the Order of the Ancient Dawn—essentially, it’s a fantasy/adventure novel about racism, which seems just about perfect for Peele. “When I first read Lovecraft Country I knew it had the potential to be unlike anything else on television,” said writer Misha Green. “Jordan, JJ, Bad Robot, Warner Bros and HBO are all in the business of pushing the limits when it comes to storytelling, and I am beyond thrilled to be working with them on this project.”

Sony Pictures Classics has acquired North American rights to Stanley Tucci’s Final Portrait. Written and directed by Tucci, the film explores the friendship between American writer James Lord and Swiss sculptor Alberto Giacometti. “Giacometti’s work and life and Lord’s poignant memoir have fascinated me for years. To finally bring my adaptation to the screen with this extraordinary cast and crew has been indeed a pleasure and to have Sony Classics distributing is a great honor,” said Tucci in a statement.

On his blog, George R.R. Martin clarified some things about all those Game of Thrones spinoffs:

1. They’re not really going to be spinoffs, per se. “We are not talking Joey or AfterMASH or even Frazier or Lou Grant, where characters from one show continue on to another. So all of you who were hoping for the further adventures of Hot Pie are doomed to disappointment. Every one of the concepts under discussion is a prequel, rather than a sequel. Some may not even be set on Westeros. Rather than ‘spinoff’ or ‘prequel,’ however, I prefer the term ‘successor show.’ That’s what I’ve been calling them.”

2. He’s working with all four writers, not just the women.

3. There’s going to be a fifth ‘successor show’: “We had four scripts in development when I arrived in LA last week, but by the time I left we had five. We have added a fifth writer to the original four. No, I will not reveal the name here. HBO announced the names of the first four, and will no doubt announce the fifth as well, once his deal has closed. He’s a really terrific addition, however, a great guy and a fine writer, and aside from me and maybe Elio and Linda, I don’t know anyone who knows and loves Westeros as well as he does.” But that doesn’t mean all five will actually get produced.

4. As for what you’re actually wondering: “And yes, before someone asks, I AM STILL WORKING ON WINDS OF WINTER and will continue working on it until it’s done. I will confess, I do wish I could clone myself, or find a way to squeeze more hours into the day, or a way to go without sleep. But this is what it is, so I keep on juggling. Winds of Winter, five successor shows, Fire and Blood (that’s the GRRMarillion, remember?), four new Wild Cards books, some things I can’t tell you about yet… it’s a good thing I love my work.”

Next, a movie made out of everything you like (if you’re cool): Marjane Satrapi is directing Radioactive, a film based on the gorgeous collaged biography Radioactive: Marie & Pierre Curie: A Tale of Love and Fallout, by Lauren Redniss, with Rosamund Pike attached to star as Marie Curie. The screenplay was written by Jack Thorne, who also wrote the stage play for Harry Potter and the Cursed Child. So this probably won’t suck.

Daniel Silva has finally sold the adaptation rights to his series of best-selling spy novels starring Gabriel Allon, Variety reports, to MGM Television. “For the fans of Gabriel Allon, I thank you for your patience,” Silva said in a statement. “I always said I would wait for the right time and the right partner.” As for the partner in question, MGM’s Jonathan Glickman assures us that he is “committed to bringing Gabriel to viewers around the world in the high-class, emotional and thrilling manner that his fans have come to expect.”

Might Claire Foy be the next Lisbeth Salander? Apparently, she is in the running to play the hacker heroine in Sony’s adaptation of David Lagercrantz’s The Girl in the Spider’s Web (a continuation of Stieg Larsson’s series)—though why Rooney Mara and Daniel Craig aren’t returning to the franchise is unclear. Probably has to do with dollar amounts.

The film adaptation of the graphic novel My Friend Dahmer, written by Derf Backderf (the pen name of John Backderf), who was a classmate of Jeffrey Dahmer. “It’s a powerful book, which has deeply resonated with loads of people of many ages here and abroad,” said director Marc Meyers. “When we first met, he signed my hardcover copy, “Don’t f**k it up!!!, Derf.”

Get your first look at Lily James in Studiocanal’s adaptation of The Guernsey Literary and Potato Peel Pie Society, by Mary Ann Shaffer and Annie Barrows.

Hell yes: Critical Content is developing Ursula K. Le Guin’s The Left Hand of Darkness into a limited TV series. The novel is about a planet whose inhabitants have no fixed gender, something many humans on earth wish for every day.

Colin Firth is set to star in the film adaptation of Jay Parini’s Benjamin’s Crossing, based on the true story of a Jewish philosopher forced to flee France in 1940. “Jay and Devon [Jersild] have written a beautiful script, which the producers are honored to support, with Pat O’Connor at the helm. The worldwide refugee crisis makes Benjamin’s plight as timely now as it was during WWII. It is a great, untold and truly heroic story that must be told,” said producers Carl and Sally Jo Effenson in a statement.

AMC has renewed the adaptation of Philipp Meyer’s The Son for a second season. Read our interview with Meyer here.

And now, for your trailer of the week: Brie Larson in the film adaptation of Jeanette Walls‘s The Glass Castle: 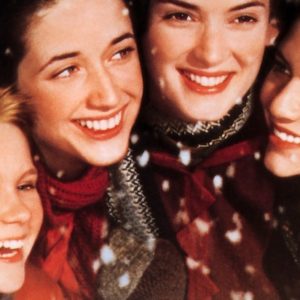 As Little Women prepares to turn 150 years old next year, at least three new adaptations are in the works. Sony Pictures...
© LitHub
Back to top