A Poem is Not a Substitute for Action, But It Can Lift Us Up

In dark times, people often turn to poetry to help them survive despair (or more specifically, as W.S. Merwin would suggest, “Read poems, not poetry.”) Poetry is not a substitute for action, but it can serve as a spark of hope in the middle of what feels like endless night. With that in mind, we’ve gathered a selection of poems that people have suggested to us, and have suggested via social media, as a way to help us all through these bad times, that we might have the energy for the struggle to come.

Do Not Go Gentle Into That Good Night, Dylan Thomas

Do not go gentle into that good night,
Old age should burn and rave at close of day;
Rage, rage against the dying of the light.

Though wise men at their end know dark is right,
Because their words had forked no lightning they
Do not go gentle into that good night.
[…full poem]

Recommended by Amy Brady: Now that the initial shock of the election outcome is wearing off, I’m steeling myself for a fight on many fronts (albeit a compassionate, empathetic, and civilized fight). Thomas’s words are fortifying and emboldening as I figure out what that fight looks like and why my contributions will be.”

Recommended by Stephen Sparks: In either the worst or the best timing, I’m getting married this weekend. We’re bringing a copy of Randall Jarrell’s Animal Family along, which my wife and I plan to read aloud before bed (or maybe we’ll gather everyone around at the reception for story time). It’s a children’s story of not just accepting but embracing differences—a man, a mermaid, a bear, and a lynx come to form a loving and beautiful family—and I can think of nothing more comforting in this particular moment than to remind myself of the intrinsic human ability to love, even those who are different. It feels necessary at the moment.

From Stig Saeterbakken’s Through the Night (tr. Seán Kinsella)

Everything we do, it occurs to me, we do in order to offer encouragement to something else, something we have no control over, but which it’s in our interest to see come to fruition. We do what we can, that’s all we can contribute. We do our bit so that something might endure. If for no other reason than that our children will have a place to view the world from, before they venture out into it. A place that doesn’t resemble what they see when they look around them, out there, and for that very reason gives them the courage they need to face it.

Recommended by Scott Esposito: Saeterbakken was undoubtedly one of the most tortured, depressed writers I’ve ever read. He killed himself in 2012 at age 46, and oftentimes this terrible end is all-too-easy to see in his work. It is some of the most bracing, painful, sad, and honest writing I’ve ever read. He was like a prophet, forcing us to see things so that we might be the better for it. Every single time, Saeterbakken just goes to that place that cuts me to the bone and makes me look life square in the face and ask it what it’s all about and why we say it is worth living.

I admire Saeterbakken for so many things, but maybe most of all because even though he never flinched from the worst this world has to offer, he also wrote about it with a purity, honesty, empathy, and—yes—optimism that such a reckoning requires. Here is a moment from late in what I regard as his master work, Through the Night (tr. Seán Kinsella). This book has stayed with me as a sort of lifetime touchstone, a place I go back to from time to time just to see where I am and if I’m remaining true to myself, and I think this paragraph speaks to a lot of what I am feeling right now.

She Had Some Horses, Joy Harjo

She had some horses.

She had some horses.

To a Friend Whose Work Has Come to Nothing, W.B. Yeats

Now all the truth is out,
Be secret and take defeat
From any brazen throat,
For how can you compete,
[…full poem]

The Applicant, Sylvia Plath
First, are you our sort of a person?
Do you wear
A glass eye, false teeth or a crutch,
A brace or a hook,
Rubber breasts or a rubber crotch,

Stitches to show something’s missing? No, no? Then
How can we give you a thing?
Stop crying.
Open your hand.
Empty? Empty. Here is a hand
[…full poem]

Recommended by Rebecca Hazleton: The poem that came most quickly to mind isn’t exactly comforting. Instead, it’s a tart take on the roles women are relegated to by authorities obvious and subtle, and how those roles deform men as well. So, not exactly comforting—but more like a thing to recognize and resist. Which, I find comforting.

What They Did Yesterday, Warsan Shire

they set my aunts house on fire
i cried the way women on tv do
folding at the middle
like a five pound note.
i called the boy who use to love me
tried to ‘okay’ my voice
i said hello
he said warsan, what’s wrong, what’s happened?

After great pain, a formal feeling comes, Emily Dickinson
This is the Hour of Lead –
Remembered, if outlived
As Freezing persons, recollect the Snow –
First – Chill – then Stupor – then the letting go –
[final stanza, full poem]

I, Too, Langston Hughes

I, too, sing America.
I am the darker brother.
They send me to eat in the kitchen
When company comes,
But I laugh,
And eat well,
And grow strong.

The Uses of Sorrow, Mary Oliver

(In my sleep I dreamed this poem)

Someone I loved once gave me
a box full of darkness.

It took me years to understand
that this, too, was a gift.

Aster. Nasturtium. Delphinium. We thought
Fingers in dirt meant it was our dirt, learning
Names in heat, in elements classical
Philosophers said could change us. Star Gazer.
Foxglove. Summer seemed to bloom against the will
Of the sun, which news reports claimed flamed hotter
On this planet than when our dead fathers
Wiped sweat from their necks. Cosmos. Baby’s Breath.
[…full poem]

Six horses died in a tractor-trailer fire.
There. That’s the hard part. I wanted
to tell you straight away so we could
grieve together.
[…full poem]

Recommended by Lucy Kogler: Here are other words that have brought me to life, have kept and continue to keep me in this realm—so heavily mined with uncertainty and loss. And those that help to keep me curious about “what’s next.” This poem by John Montague—Irish Poet—is on my refrigerator.  I look at it and think about it daily.

above the grey-black wilderness.
A tree-
high thought
tunes in to light’s pitch: there are
still songs to be sung on the other side
of mankind.

Recommended by Lucy Kogler: This poem by Paul Celan, Holocaust survivor, suicide, clearly allows for a world outside of the mess we have made.

There is this infinite energy, the power of God forever

This is God’s will; he works, he grows and changes,has no object.
[…full poem]

Recommended by Lucy Kogler: I read this poem at my husband’s memorial service. Handed a copy out to all who attended. It is not about “God” to me, but like it was to Jeffers, about nature as a Holy occurrence.

What Can Art Do After Trump? 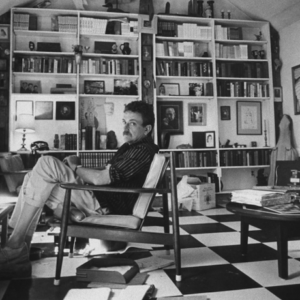 The Literary is Political:  Garnette Cadogan on staying and fighting · John Berger had a bad feeling that Trump...
© LitHub
Back to top