What Can Art Do After Trump?

On Giving Feelings Shape, And Giving Them Grace

On the way to my job teaching writing to college students in southern New Hampshire, I have had to pass many, many Trump signs. They became so prevalent that they began to feel like just another part of the landscape—a default unpleasantness, in the same way a long, boring commute can begin to feel like a normal part of the day. The signs were often at jaunty angles and appeared in clusters, as though sown from the teeth of an orange, handsy dragon who wants to hang a net in front of his cave to keep out dragons from other places.

Despite the fact that I became relatively inured to the signs over time, there was one sign I couldn’t shake. It was one of those stubby campaign-issued signs on two spindly metal legs that you see everywhere at times like these. But, rather than popping up from a median or front lawn, it was stuck into the earth just outside a graveyard. Every time I drove by it, I imagined the potential photograph—I would lie on the ground, so the sign loomed over me, with, behind it, row after row of ominous tombstones, and I would be capturing something real, something that meant something more than its attendant parts.

I felt the urge to take this photograph on every single drive, and as the landscape changed, and I realized it was coming, I could feel myself filling with something like joy.

What was this feeling? Why could a symbol of something I found so horrifying make me feel so good?

The answer, I think, is art.

Teodor Adorno famously said, “to write a poem after Auschwitz is barbaric.” This oft-quoted line is actually wedged within a sentence that lends it a very different meaning than it has when separated, but whatever Adorno meant to say, this line on its own resonates. We who are old enough to remember 9/11 will remember the conversations, then, around when it would be all right to create again, to make art, to joke. Late night shows, readings, events were cancelled, everyone was afraid to laugh or smile.

Art, however valued, is tinged in the United States with frivolity. It seemed, in the midst and aftermath of one our country’s greatest tragedies, greater than a Trump presidency, as though the act of creating something to be looked at or read or listened to, to be loved or laughed at, was somehow not giving our despair the respect it deserved.

But art in the face of tragedy is not frivolous. Our factories don’t stop building cars and trucks, they don’t stop packaging food or filling tubes of toothpaste. If the wheels of capitalism continue to turn and produce, why can’t the wheels of art?

When I woke up the morning of November 9th, I didn’t know yet who had won. I had a few text messages from late the night before that seemed to hint at a loss for Clinton, but I kept hope. It wasn’t until I logged onto Facebook and saw a likeminded poet’s status that I knew, with a sinking heart, that the worst had happened. He had quoted Warsan Shire’s “What They Did Yesterday Afternoon”:

later that night
i held an atlas in my lap
ran my fingers across the whole world
and whispered
where does it hurt?

Another friend, who teaches in New York Public Schools, said she was supposed to teach her students how to write an essay for a state test that day, but she couldn’t bring herself to do it. She was asking for poems she could read with her students instead, to help them make sense of what had happened. Friends suggested Yeats’s “Second Coming,” Maya Angelou’s “Still I Rise.” My friend chose “Let America Be America Again” by Langston Hughes:

O, yes, I say it plain,
America never was America to me,
And yet I swear this oath—
America will be!

Lying in the dark, still in bed, my little phone glowing in my hand, really needing to get up and get ready for work, I switched to Twitter, searching for more.

Reply to this tweet with a poem that’s important to you.

And re-tweeted every answer—Gwendolyn Brooks’ “Kichenette Building” (“Dream makes a giddy/ sound, not strong/ Like ‘rent’”), Derek Walcott’s “Love after Love” (“You will love again the stranger who was your self”), Elizabeth Bishop’s “One Art” (“The art of losing isn’t hard to master”), and Ijeoma Umebinyuo’s “Diaspora Blues”:

Those this writer has surrounded herself, virtually and physically, have turned to poetry in the face of a Trump presidency, which is a big change from the think pieces and op-eds that had flooded my timeline in the weeks leading up to the election. Why poetry, and why now?

On WNYC’s Bullseye, a radio program, Jesse Thorn recently interviewed the film director Paul Schrader, who spoke about being without a home and living in his car. He spent much of his time driving around “filled with anger and wanting to kill somebody.” He was drinking all the time, and eventually ended up in the hospital with a bleeding ulcer at 25 years old, where he realized something: “My emotional and psychological needs were greater than those that could be addressed by nonfiction, and I was going to have to start telling stories if I was going to process some of the feelings I was having.”

Telling stories, interpreting the world around us, refracting tragedy through the human prism of art to create something we can all look on and feel as beautiful is what saves us.

I don’t mean save us in the literal sense. As one Twitter user said:

did any celebrity or poem save us

Of course, the answer is no. A friend of mine, a black poet living in Florida, hasn’t been able to write a poem in months. He’s worried they’ve stopped. And I understand that—sometimes art isn’t enough, or everything else is too much. But I really hope he finds the poems again, because the world needs them.

Human beings think all the time. Our brains are scary, messy soups of feelings and opinions and experiences and memories. How can we possibly be expected to process all of that, to express it in a way that others can feel along with us, how can we commune and commiserate with those around us, if we don’t express it through art?

I never took that photograph of the Trump sign outside the graveyard. When I was considering taking it, it was a different proposition—a scary prediction that I was irresponsibly confident would not come to pass. The graves were, then, a sign to me of the future of Trump’s presidential run—just another inert, crumbling monument among the dead.

Instead, the unthinkable came to pass. The morning of November 9th, I made my usual two-hour drive to teach. As I neared the graveyard, I felt my heart speed up. I thought, “This time, I’m going to stop.” I was worried that a Trump supporter might see me, guess what I was doing, and threaten me in some way, but I was resolved to do it.

Now, the message would be different: the graveyard represented my worries about the future of my country and its inhabitants, especially its most vulnerable populations, the future of the environment, of humanity, of the planet.

But when I got to the graveyard, the sign was gone. Later, I found out there is a law in New Hampshire that candidates must remove all signs within 24 hours of the election. In that moment, however, it felt like a significant event. I had waited too long to make an image of what I was feeling—to translate my worries and my hopes and my fears into something I could share. I would only be posting it on social media, but it would have made me feel better, I know, to lie in that wet, cold, winter-killed grass and take that photo.

Being able to make art with what I’m feeling is one of the only ways I’ll get through the next few weeks, months, even years. It isn’t the same as community organizing or advocating for education reform or even doing what I do in the classroom, teaching my students how to think critically and question their assumptions, but I don’t think I’d have the strength for any of that right now if it weren’t for art getting me through.

Following the election, Honus Honus, of the band Man Man, posted a link to their song for Mavis Staples, “The Grace In Your Heart. In the post, he said, “Hang in there America. Let love and compassion carry you thru the darkest times.” It’s a bouncy track with his signature low, plaintive voice, a perfect contradiction for these times:

Not exactly Langston Hughes, but listen to the song (I have been, on repeat). It will make you feel better.

Heather Wells Peterson has an MFA in Fiction from the University of Florida. Her work has appeared in, or is forthcoming from, American Short Fiction, Subtropics, Bellevue Literary Review, Lucky Peach, and The Collagist, among others . She currently lives in Vermont and teaches in New Hampshire.
http://heatherwellspeterson.com

On Staying and Fighting, and Finding Strength in Poetry 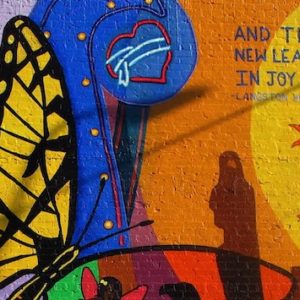 In dark times, people often turn to poetry to help them survive despair (or more specifically, as W.S. Merwin would suggest,...
© LitHub
Back to top