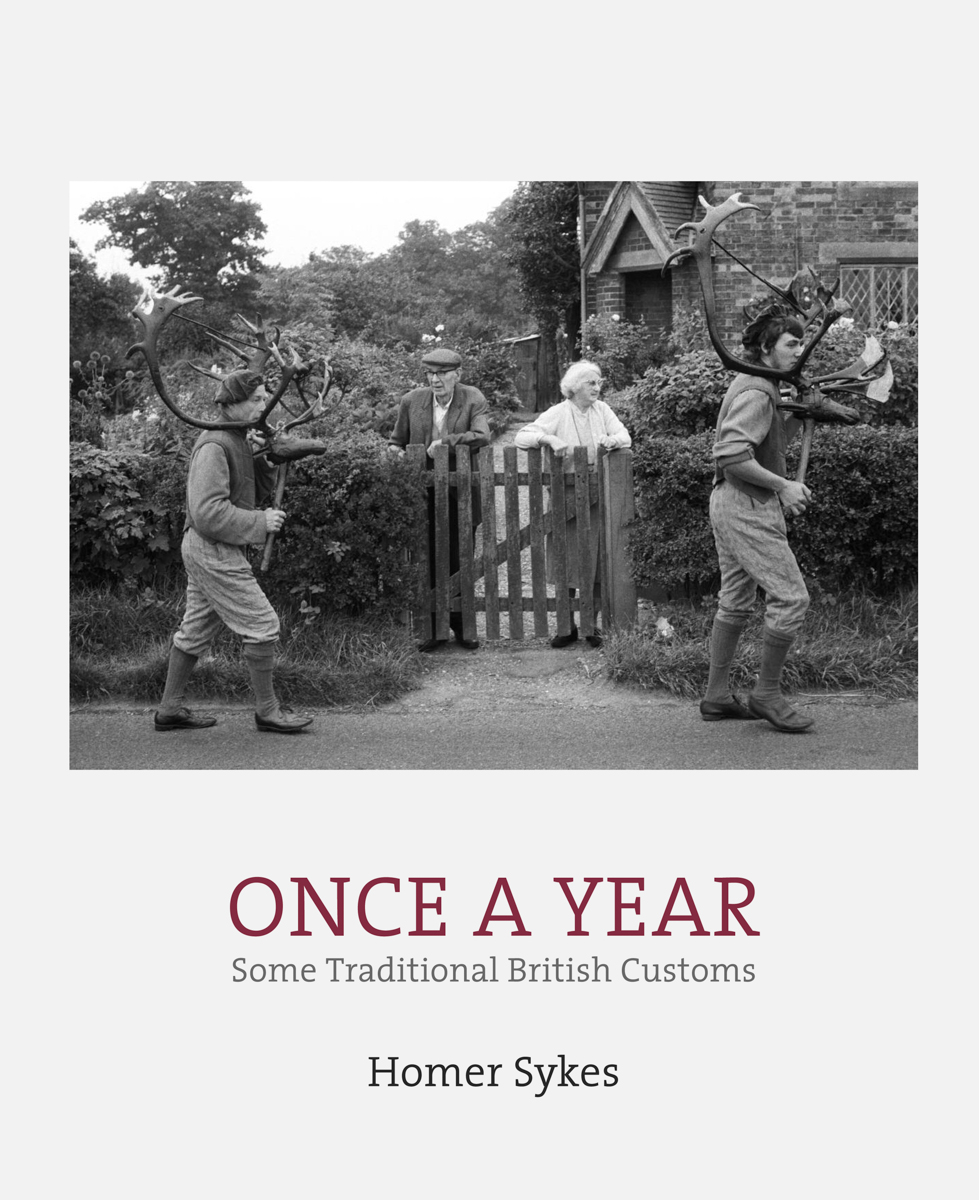 With the specter of Brexit consuming the news cycle—and the darker side of our collective imaginations—it is hard not to see Homer Sykes’ photographs as windows on a little Britain that has chosen to look inward, and to abandon the experiment of a united Europe. But Sykes’ document—Once a Year: Some Traditional British Customs, reissued by Dewi Lewis 40 years after it was first published—takes a much longer view of human community, and the traditions and rituals that sustain it. Comprised of photographs taken throughout Britain in the early 1970s, Sykes seeks to capture regional rites and obscure festivals passed down across dozens of generations, many that have survived the rise and fall of nation states and endure to this day. 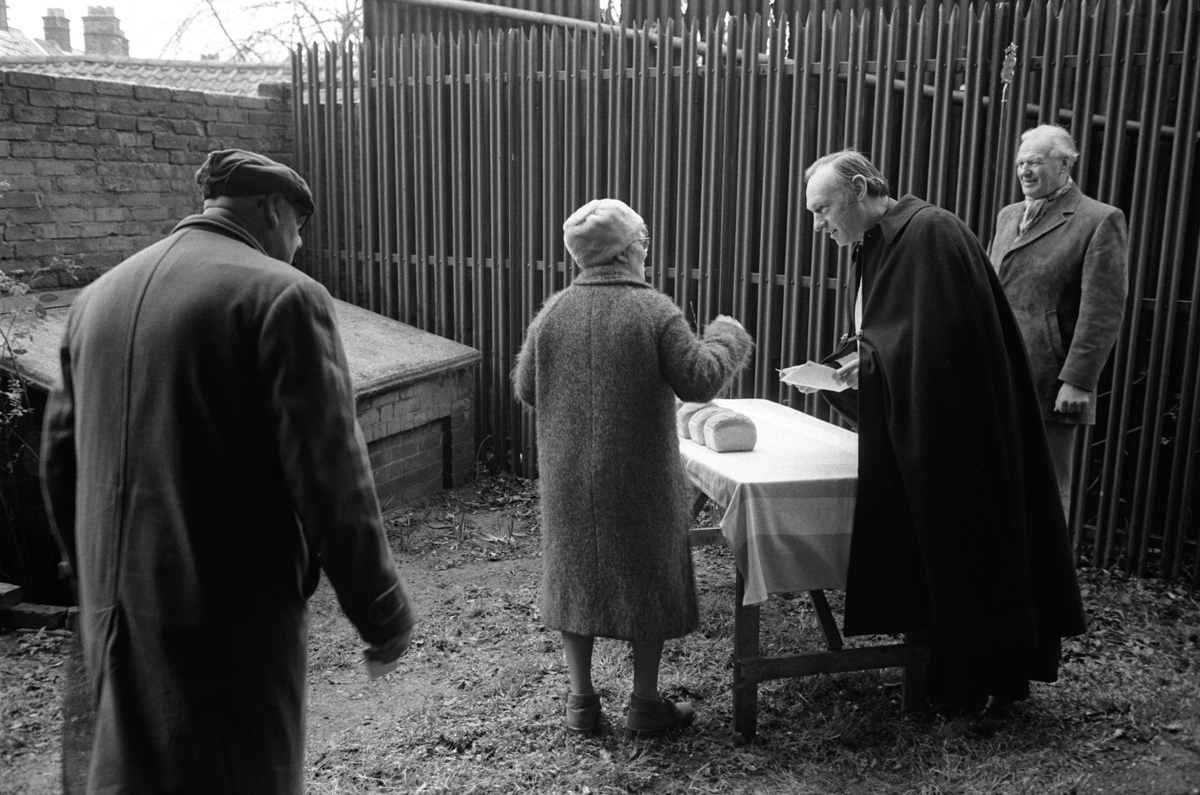 Carlow’s Charity, Woodbridge, Suffolk, 1975. The Reverend Canon Rowlands, accompanied by Churchwarden Mr. George Thacker, distributes bread to those pensioners who qualify from a table set up in a backyard of the Bull Hotel. This is the site of Carlow’s Tomb.

George Carlow, who died in 1738, was a member of a religious sect called ‘Separate Congregation’, one of whose beliefs was that Saturday should be kept as the Sabbath. Before he died, Carlow had a vault built in the garden of his house, on which was inscribed:

Weep for me dear friend no more for I am gone a little before. But by a lite of pity prepare yourself to follow me. Good friends for Jesus sake forbear To move the dust entombed here.

Blessed be he that spares these stones. Cursed be he that moves my bones. Twenty shillings worth of bread to be given on this stone to the poor of the town on the second of February forever.

This inscription records the directive in his will that the rent from his premises (now covered by the new annex of the Bull Hotel) should go towards the upkeep of his tomb, and that every year on Candlemas Day (2 February) the churchwardens from St. Mary’s should purchase twenty shillings worth of twopenny loaves from the two poorest bakers in the town, and give them to the poor of the parish. Moreover, this was to “go on for ever.” At present, since loaves cost more than two pence, only twelve loaves are purchased and distributed by the rector of St. Mary’s the help of the verger and two churchwardens. Sherry is then taken in Carlow’s room in the Bull Hotel by all those taking part. 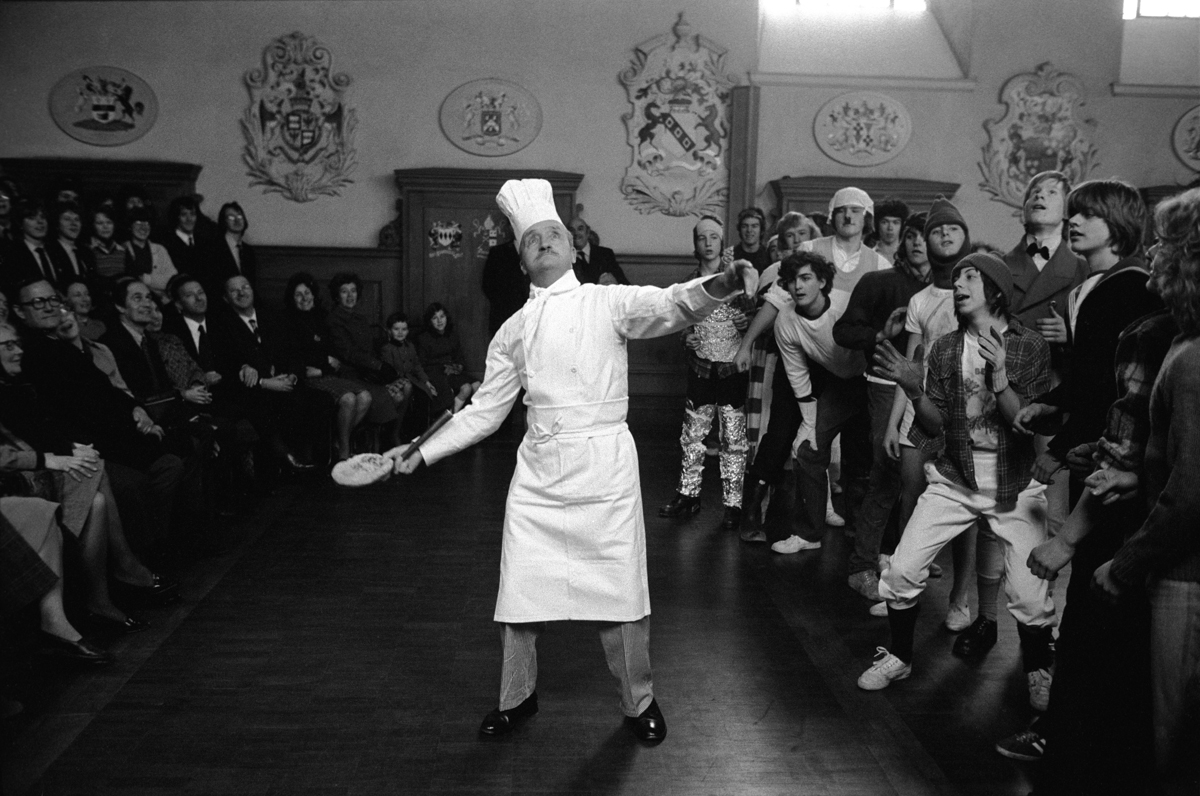 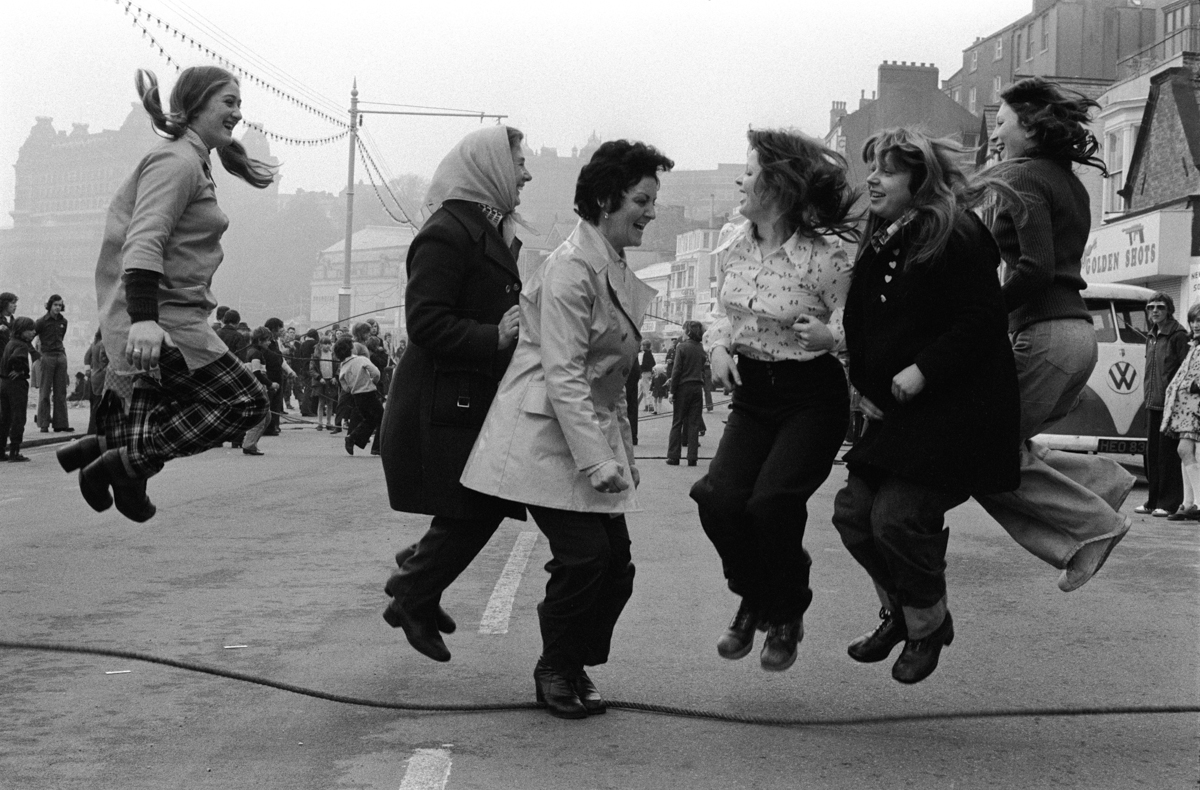 Shrove Tuesday, Scarborough, Yorkshire, 1974. According to a 19th-century account, Shrove Tuesday in Scarborough was known as ‘Ball Day’, and from time immemorial balls have been tossed about on Southsands. However, for some time skipping has been the most favored custom. In 1974 local schools still have a half-holiday, and hundreds of children, parents and adults gather after lunch on the promenade at Southsands to skip with huge ropes until dusk. 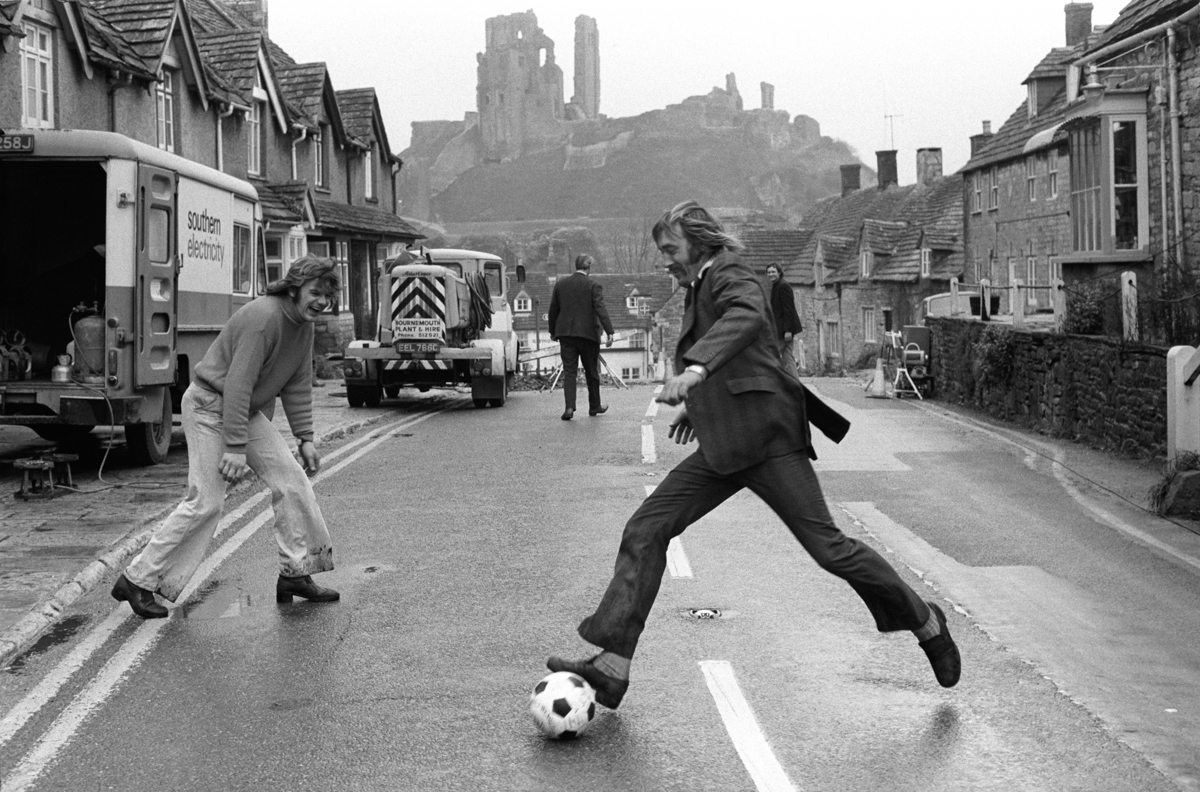 At the annual Shrove Tuesday football game, Corfe Castle, Dorset, 1975. Freemen kick a football around Corfe and over to Owre Quay, three miles away, in order to preserve the Company’s right of passage. 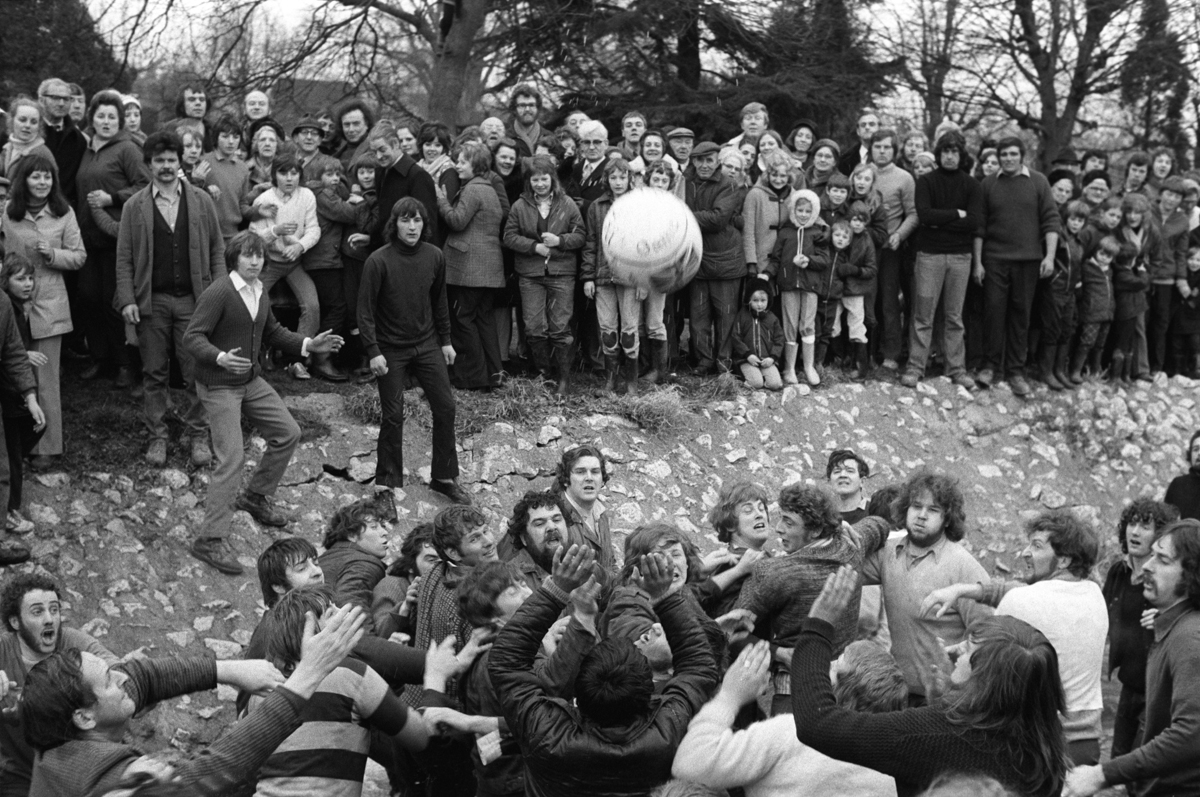 Royal Shrovetide football, Ashbourne, Derbyshire, 1974. The game is played between the Up’ards, those born north of the Henmore, a stream which runs through the town, and those born on the south side, the Down’ards. The pitch is a no-man’s land set between two watermills at either end of town and which are two miles apart. 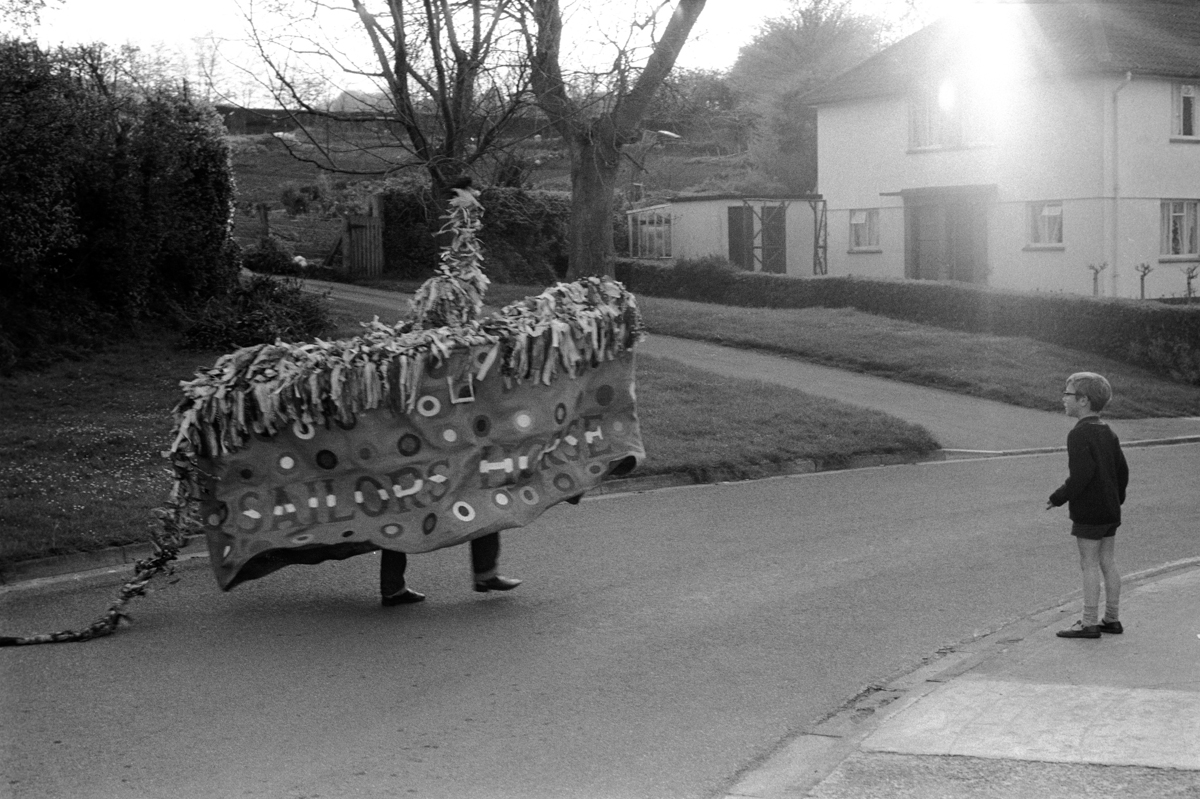 The Minehead Hobby Horse, Minehead, Somerset, 1971. At 6am on May Day, the Sailors Horse walks to Whitecross, a mile west of Minehead, where the horse bows three times to the sun and then walks back to Minehead. 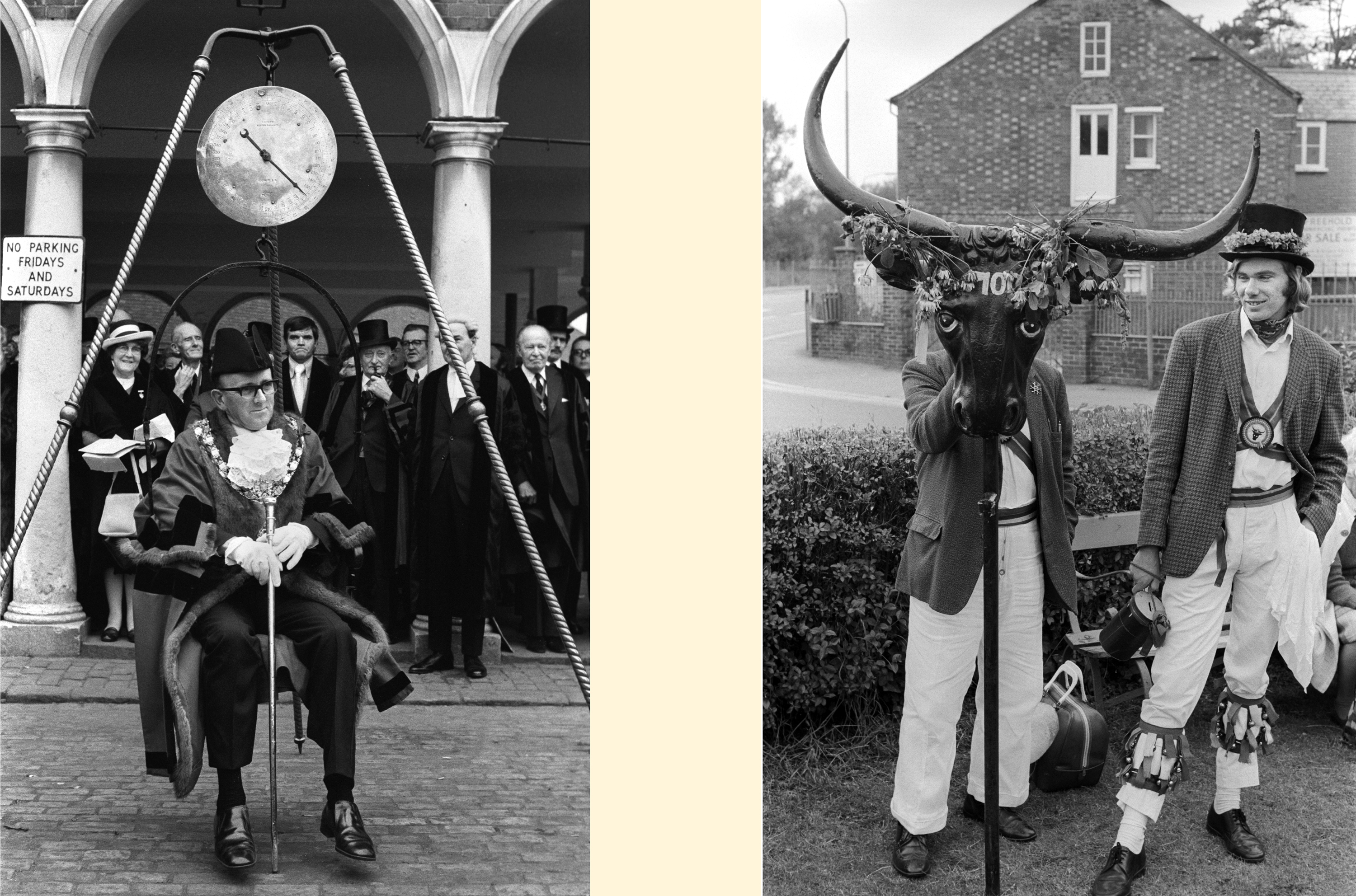 At left, High Wycombe, Buckinghamshire, 1971. Weighing the Mayor (Mr. Victor Lay ) at the start of his or term of office and again at the end is a custom unique to High Wycombe. It is thought the tradition began to ensure the mayor and other officials did not “live off the fat of the land” at the expense of the ratepayers. The weighing is held in the High Street on huge scales and various dignitaries are weighed in addition to the councillors. It is traditional for the crowd to jeer when the person is declared to weigh so many pounds “and some more” and for the crowd to cheer if it is “and no more.” At right, the Election of the Mayor of Ock Street, Abingdon, Oxfordshire, 1971. 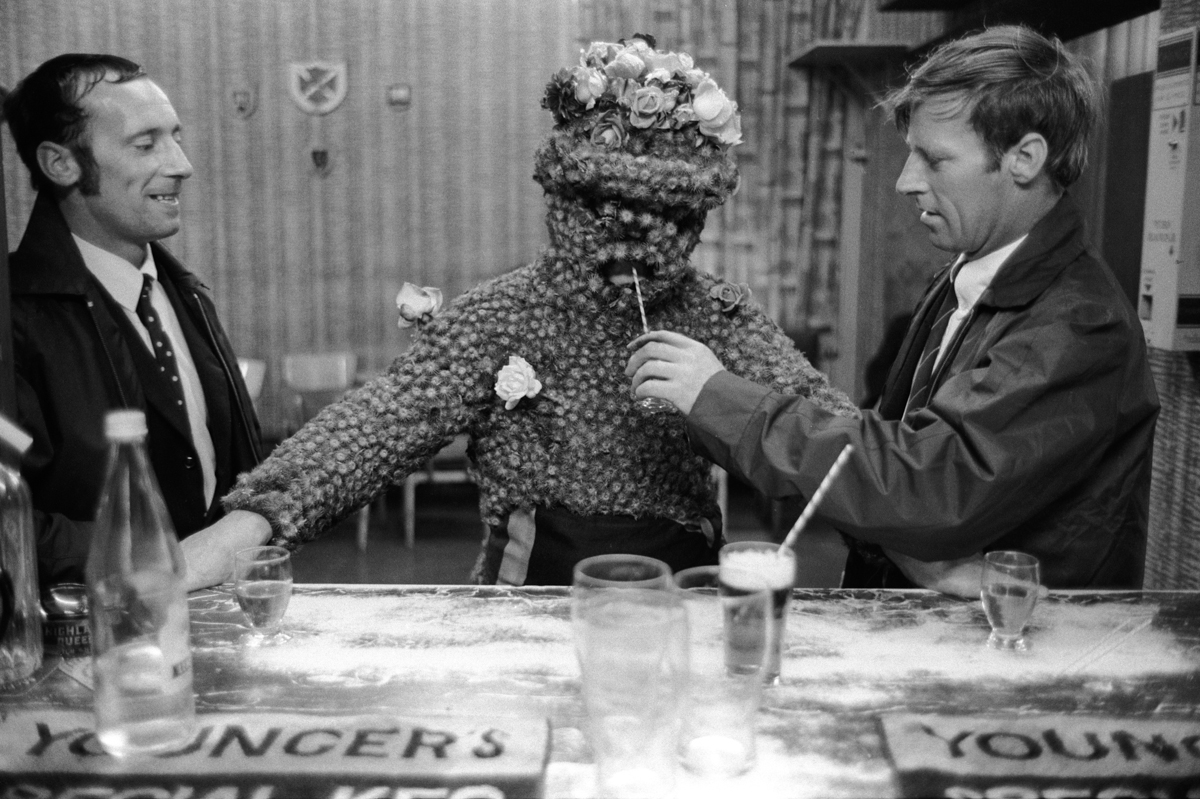 South Queensferry, Lothian, Scotland, 1971. The Burry Man, John (Jacko) Hart, with his helpers Billy Scott and David Scott in the South Queensferry Ex Servicemans Club, taking a break from his perambulations of the towns boundaries; Hart was the local grave digger. 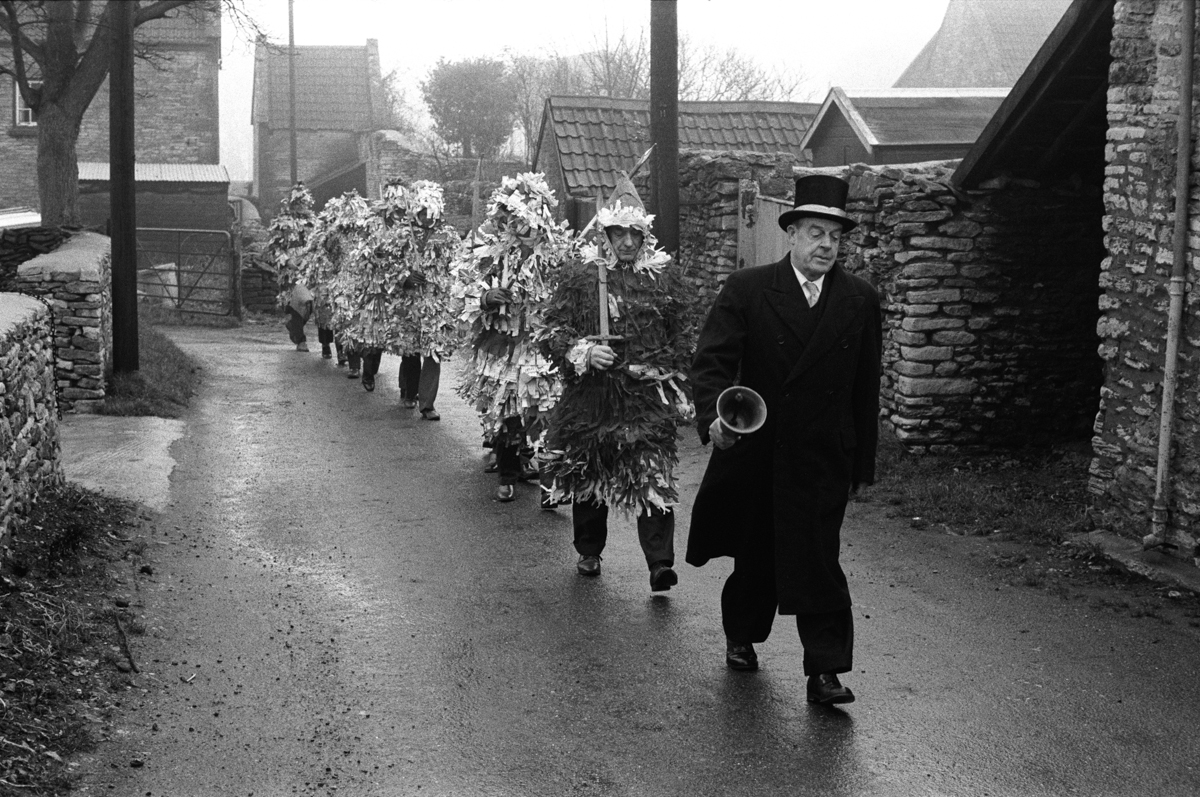 All photographs © HOMER SYKES, from Once A Year, Some Traditional British Customs courtesy of Dewi Lewis Publishing.

At the Qalandia Checkpoint: The Occupation's Humiliation Machine 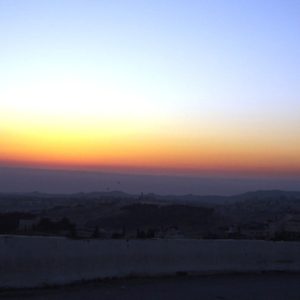 At the Qalandia Checkpoint: The Occupation's Humiliation Machine Qalandia The first time I crossed Qalandia by foot was in the spring of 2011. I was staying with a friend from Jayyous....
© LitHub
Back to top
Loading Comments...