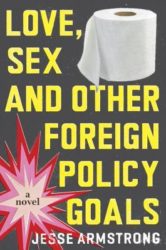 The following is from Jesse Armstrong’s novel, Love, Sex, and Other Foreign Policy Goals. Jesse Armstrong is the cocreator and writer of the BAFTA Award–winning Peep Show, as well as Fresh Meat, Bad Sugar, Babylon and, with Chris Morris, Four Lions. He was also cowriter of the The Thick of It and the Oscar-nominated In the Loop, and writes for the HBO comedy series Veep.

Shannon’s idea, when she eventually rolled it out, was that some of us—as many as could fit—should go to Bosnia, in a van. She knew how to get hold of the van via a man named Bob. We would load up this van and take it to Sarajevo. Bob, a rather round, older hippie, watched from his semi-detached position leaning against the wall at the back of the room.

“What?” he said, pretending he had been distracted rolling a cigarette. “Sure thing. If that’s what the lady says.” He took a sip of his pint of Guinness, looked down at his Mexican poncho and then back up and round the room with a rueful grin, making sure everyone had clocked the heart of gold he would have preferred to keep well hidden behind his “gruff” exterior.

“Bob Classic,” I said back, hoping she’d say something else close and warm.

“Onomatopoeic Bob,” she said softly, and I was convinced I’d fallen quite strongly in love.

A huge amount of that first meeting centered around the van. The getting of the van, the fitting out of the van, the number of seats in the van, what could and could not be fitted into the van. It felt after a while as if getting the van to Bosnia was, itself, at some level, the central aim of the trip.

But beyond the van, and some supplies, Shannon’s idea, she explained at the next meeting a month later, was to write and perform a play. A play that would transmit a “mind virus,” the primary symptom of which would be peace. “Because peace can catch on just like war.” Sara wrote very deliberately at that point, not clocking that Shannon had said it with exaggerated gravity, mocking the idea just enough to make it plausible.

Shannon explained to us that we would zoom through the mountains, dropping our play like a good fart out the back of the van until—not this (but maybe this?)—the soldiers and the peasants and the intellectuals stopped for a moment in the presence of the majesty of the purity of youth bringing this simple strong idea to their mountain land with open hearts: peace.

We’d lost a lot of the folk by the time of that second meeting, the couple of middle-aged women, the Asian family, the frosh out looking for friends. But there were some additions. Cally, Penny’s best friend, was with us. I tried not to resent her too much, sitting as an aggressively healthy barrier between us, shifting in her seat often, as I tried to catch Penny’s eye. Also, from a defunct socialist international relations society: Christian. Hard, compact and serious. He’d grown up around Camden, he told us afterward, downstairs in the pub, like he was turning over a winning poker hand. His clear pretty eyes looked like they were scanning your clothes and haircut to check if you were any kind of threat. He was into critical theory and left-wing politics the same way he was into his button-down shirts and imported Adidas shell-toe sneakers—because they made him invulnerable.

Penny was all lit up by the idea of the play. “A play!” she said to Cally, who repeated it back to her over the pub table. Cally was a drama student and Penny, I knew, wanted to write plays, so they got quite excited together.

Of course, I was aware it was a little optimistic, Shannon’s plan for the play, but up above the Hope and Hegemony, or whatever it was called, as that day fizzed out, the clouds above just puffs of jokes about rain, I did think that maybe this gang could bring something good to the war—that perhaps stout heart and noble head were something in themselves?

“Ok, you all know the situation, so the question now is, who’s actually coming?”

When she finally popped the question, it felt like the previous twelve weeks of meetings had been a long setup to the joke of nonintervention, and now the pictures of the dead Shannon passed around were the punch line. And you had to laugh. We were doing nothing while the strong massacred the weak. We could take food, we could take sustenance, but the best thing we could take, Shannon said, like Sontag taking

Godot to Sarajevo, was something that announced clearly: we are people too and you are our brothers and sisters.

“Another’s pain is not our own,” she said to those of us sitting in a circle at Penny and Cally’s attic flat. We’d shifted there six or seven weeks in, once the hard core was set. It was ideal for me. I got to see Penny’s kitchen; the poems on the fridge; the collection of single lost gloves she’d found and spray-mounted along the hallway wall. And sometimes, like some terrible freak, on my way to the bathroom, I’d poke my nose into her room and smell it: the delicious nothingy smell from her wide-open window, and scan the spines of her books, trying to remember an eyeful so I could read them and think of things to say.

“But what if it was?” Shannon went on. “What if we could send feelers out around the globe—if we could all sense from afar at the end of these tendrils of feeling every discomfort in the world? What if you shriveled at every rape in China? What if no one could rest until everyone was content? That would be paradise, wouldn’t it? That would be heaven on earth? If the web that held us all was infinitely closely woven, and if every person in the street would stop to catch you if you fell? So that’s why we’re going. We’re going to say: another’s pain is ours.”

Penny looked at me, too somber to smile, and I nodded back at her. Maybe tonight I should finally try something?

“These evolutions of sympathy have been the leapfrogging of civilization itself.” Shannon paused, taking a quick look at some ballpoint on the back of a receipt. “To feel common feeling, outside the family, the tribe, the clan, the region, the nation, across boundaries of color and creed and gender and sexuality—that’s been evolution as much as learning to make bronze and steel and atom bombs. In fact, it sometimes seems to me that maybe the two impulses are in a race? And we’re going to see which outstrips the other? The push of the spear’s point, or the rush and gush of the unstoppable water of fellow feeling, spilling through the gullies and the valleys out around the world, seeing what flames it can’t quench?”

Sara didn’t feel the need to write any of this down. She just looked round at us from Shannon’s side and nodded like this was exactly how she would have put it, and now they were going to finally find out what kind of shitheads they were dealing with.

When Shannon popped the straight question, “Who’s coming to Bosnia?” Simon’s hand was quickest to go up. This was his very first week of involvement, and I stared at him hard; as you would do at a man who has walked into Westminster Abbey by a side door during a coronation and casually put the crown on his own head.

Then Penny’s hand went up—I didn’t realize she was so set. Then another and another. And suddenly, in the space of a few seconds, I went from a man who was weighing up his options, to a man about to miss out on his dearest wish, which—I had just realized—was to take a peace play to Bosnia and extend the evolution of humanity to a new continuum.

But I got my hand up just a little too late. Beaten by a health-food cooperative worker named Kyrk. So as Shannon asked us the tiebreaker—why we wanted to come and what skills we could bring—I decided to roll out my trump card: my grandfather, and his special history.

“Look, I actually want to go because my dad’s dad, my grandpa, was a Yugoslav. Where I come from, a lot of Serbs came after the war, to the area, so it’s quite personal and also, I speak it, Serbo-Croat. Because of my dad.”

“I understand more than I speak,” I admitted.

“But you can say things?” Sara asked.

“Yes. I can make myself understood,” I said.

Kyrk looked afraid. “I am able to—I know the edible mushrooms. Many puffballs are edible.”

I could feel people smile.

And so, like a liberal Magnificent Seven of eight, saddling up to ride to the rescue of the peasants, the team was assembled: Shannon, our Lenin, our leader. Sara, her assistant, full of an unfriendly infinite pity for the world. Simon, my enemy, self-proclaimed “poet” and soon-to-be author of a coruscating editorial for the university paper entitled “Why We Go,” which made Penny, and also, I’m ashamed to say, me, shiver with the thrill of our moral superiority when we reread  it. Cally, who wore a face of sustained irony in the course of all our conversations—on any topic from international affairs to jam doughnuts—because, I suspected, she had no idea what in the world was serious and what was not. Christian, clever, clean, socialist, unsmiling, half with us, half hating us. Onomatopoeic Bob, our hippie van master. And finally Penny, who, it had been agreed, after Shannon read her unfinished script, The Night Dog, about a border collie who comes to stay with a family and draws out their dark secrets (excellent, I had decided on a third reading), should author our peace play.

And couldn’t Kyrk squeeze in too? Into a Kyrk-shaped jag, stuffed like a beanbag between the boxes in the back? Well, no. The belief that only eight could fit in the van, plus the aid, was a self-protecting mantra that Shannon and Sara, and eventually all of us, repeated in defense of the seriousness of the trip. That we would set off for a war zone in a thin-skinned rackety Ford? Fine. But that we would risk censure from the Belgian traffic police for driving over capacity? That was too much.

From LOVE, SEX, AND OTHER FOREIGN POLICY GOALS. Used with permission of Blue Rider Press. Copyright © 2015 by Jesse Armstrong. 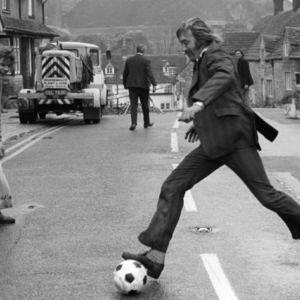 The Unyielding Rituals of Little Britain With the specter of Brexit consuming the news cycle—and the darker side of our collective imaginations—it is hard not to see Homer...
© LitHub
Back to top