Giovanni’s Room, James Baldwin (1956)
He looked at me with his mouth open and his dark eyes very big. It was as though he had just discovered that I was an expert on bedbugs. I laughed and grabbed his head as I had done God knows how many times before, when I was playing with him or when he had annoyed me. But this time when I touched him something happened in him and in me which made this touch different from any touch either of us had ever known. And he did not resist, as he usually did, but lay where I had pulled him, against my chest. And I realized that my heart was beating in an awful way and that Joey was trembling against me and the light in the room was very bright and hot. I started to move and to make some kind of joke but Joey mumbled something and I put my head down to hear. Joey raised his head as I lowered mine and we kissed, as it were, by accident. Then, for the first time in my life, I was really aware of another person’s body, of another person’s smell. We had our arms around each other. It was like holding in my hand some rare, exhausted, nearly doomed bird which I had miraculously happened to find. I was very frightened; I am sure he was frightened too, and we shut our eyes. To remember it so clearly, so painfully tonight tells me that I have never for an instant truly forgotten it. I feel in myself now a faint, a dreadful stirring of what so overwhelmingly stirred in me then, great thirsty heat, and trembling, and tenderness so painful I thought my heart would burst. But out of this astounding, intolerable pain came joy; we gave each other joy that night. It seemed, then, that a lifetime would not be long enough for me to act with Joey the act of love.

Bram Stoker, Dracula
The girl went on her knees, and bent over me, simply gloating. There was a deliberate voluptuousness which was both thrilling and repulsive, and as she arched her neck she actually licked her lips like an animal, till I could see in the moonlight the moisture shining on the scarlet lips and on the red tongue as it lapped the white sharp teeth. Lower and lower went her head as the lips went below the range of my mouth and chin and seemed about to fasten on my throat. Then she paused, and I could hear the churning sound of her tongue as it licked her teeth and lips, and could feel the hot breath on my neck. Then the skin of my throat began to tingle as one’s flesh does when the hand that is to tickle it approaches nearer, nearer. I could feel the soft, shivering touch of the lips on the super sensitive skin of my throat, and the hard dents of two sharp teeth, just touching and pausing there. I closed my eyes in a languorous ecstasy and waited—waited with beating heart. 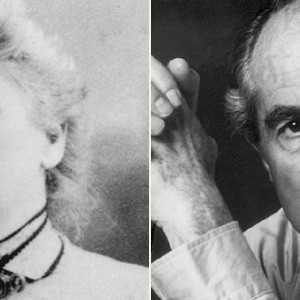