Lady Chatterly’s Lover, D.H. Lawrence
He too had bared the front part of his body and she felt his naked flesh against her as he came into her. For a moment he was still inside her, turgid there and quivering. Then as he began to move, in the sudden helpless orgasm, there awoke in her new strange thrills rippling inside her. Rippling, rippling, rippling, like a flapping overlapping of soft flames, soft as feathers, running to points of brilliance, exquisite and melting her all molten inside. It was like bells rippling up and up to a culmination. She lay unconscious of the wild little cries she uttered at the last. But it was over too soon, too soon, and she could no longer force her own conclusion with her own activity. This was different, different. She could do nothing. She could no longer harden and grip for her own satisfaction upon him. She could only wait, wait and moan in spirit and she felt him withdrawing, withdrawing and contracting, coming to the terrible moment when he would slip out of her and be gone. Whilst all her womb was open and soft, and softly clamouring, like a sea anenome under the tide, clamouring for him to come in again and make fulfillment for her. She clung to him unconscious in passion, and he never quite slipped from her, and she felt the soft bud of him within her stirring, and strange rhythms flushing up into her with a strange rhythmic growing motion, swelling and swelling till it filled all her cleaving consciousness, and then began again the unspeakable motion that was not really motion, but pure deepening whirlpools of sensation swirling deeper and deeper through all her tissue and consciousness, till she was one perfect concentric fluid of feeling, and she lay there crying in unconscious inarticulate cries.

Kathy Acker, My Mother: Demonology
After she came back, Isabelle and I arranged to meet alone in the church.

I dug her neck into my teeth. Then I nailed her hands against the floor. Her pincers tore at me. I followed everything inside me. From now on her legs would always be spread open. I stormed her openings as if she was beleaguered fortress.

Another memory: Night after night when it was dark I crawled into I’s bed. We held hands and told each other our stories of childhood.

I don’t remember. Don’t describe what can’t be remembered. What will never be seen. What’s between the legs, I and I. She was discovering the little organ that the cock imitates. My limitations are too painful. I transformed into the sex of a dog, red and unbearable to my own eyes.

Then I peered out from beneath the sheets at an overflow of nipples.

I began once more where I had left off. A kitten rubbing and rubbing its own fur which reeks overflows into total sex. I know that night will soon be leaving us. I want to run away because this sex cannot stop, but we can’t run away because we have to be at school.

We both knew that soon it would be morning and that morning, not the orgasm, was our end.

After I read this I looked up D.H. Lawrence to see if he wrote on speed. Apparently not. Impressive… Look, I just can’t resist a sentence part like “melting all molten inside.” Or “unconscious inarticulate,” which, since it’s impossible for the woman to feel all this unconsciously, makes it a classic rape fantasia. The sea anemone wants what it wants.

Sarah Nicole Prickett is a writer in New York and the editor of Adult. Her writing has appeared in or on Artforum, Bookforum, Dazed & Confused, The Hairpin, Hazlitt, Interview, The New Republic, The New York Times Style Magazine, n+1, Vice, and more. She is a contributing editor at The New Inquiry and the co-host of It's Fine, a radio show on Know-Wave.
http://www.snpsnpsnp.com/
Share: 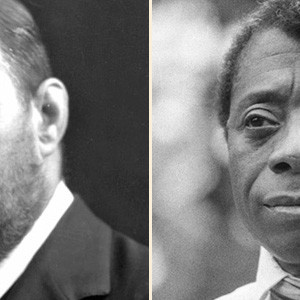 The Tournament of Literary Sex Writing: James Baldwin vs. Bram Stoker JAMES BALDWIN VS. BRAM STOKER   Giovanni’s Room, James Baldwin (1956) He looked at me with his mouth open...
© LitHub
Back to top