Written on the Body, Jeanette Winterson (1993)
She arches her body like a cat on a stretch. She nuzzles her cunt into my face like a filly at the gate. She smells of the sea. She smells of rockpools when I was a child. She keeps a starfish in there. I crouch down to taste the salt, to run my fingers around the rim. She opens and shuts like a sea anemone. She’s refilled each day with fresh tides of longing.

“Brokeback Mountain,” Annie Proulx (1997)
Late in the afternoon, thunder growling, that same old green pickup rolled in and he saw Jack get out of the truck, beat up Resistol tilted back. A hot jolt scalded Ennis and he was out on the landing pulling the door closed behind him. Jack took the stairs two and two. They seized each other by the shoulders, hugged mightily, squeezing the breath out of each other, saying, son of a bitch, son of a bitch, then, and easily as the right key turns the lock tumblers, their mouths came together, and hard, Jack’s big teeth bringing blood, his hat falling to the floor, stubble rasping, wet saliva welling, and the door opening and Alma looking out for a few seconds at Ennis’s straining shoulders and shutting the door again and still they clinched, pressing chest and groin and thigh and leg together, treading on each other’s toes until they pulled apart to breathe and Ennis, not big on endearments, said what he said to his horses and his daughters, little darlin.

Probably unwise on two at least levels to invoke cats in the context of vaginas, let alone to compare women to bodies of water, but when was this, the 80s? It’s great. “Rockpools when I was a child,” I love that. Her sentences come out like little pocket knives—like, is that a sentence, or are you just about to stab me! Lolita has that origin myth of Annabel in the sand on vacation and when I read this right away I thought of Annabel, which is totally wrong.

Sarah Nicole Prickett is a writer in New York and the editor of Adult. Her writing has appeared in or on Artforum, Bookforum, Dazed & Confused, The Hairpin, Hazlitt, Interview, The New Republic, The New York Times Style Magazine, n+1, Vice, and more. She is a contributing editor at The New Inquiry and the co-host of It's Fine, a radio show on Know-Wave.
http://www.snpsnpsnp.com/
Share: 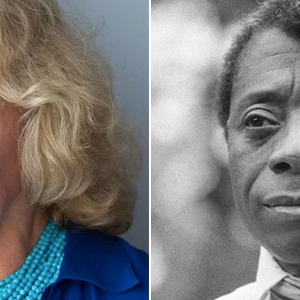 The Tournament of Literary Sex Writing: James Baldwin vs. Erica Jong JAMES BALDWIN vs. ERICA JONG Giovanni’s Room, James Baldwin (1956) He looked at me with his mouth open and his dark...
© LitHub
Back to top