Eileen Myles Picks the First Winner from the Post-Lolita Division

Giovanni’s Room, James Baldwin (1956)
He looked at me with his mouth open and his dark eyes very big. It was as though he had just discovered that I was an expert on bedbugs. I laughed and grabbed his head as I had done God knows how many times before, when I was playing with him or when he had annoyed me. But this time when I touched him something happened in him and in me which made this touch different from any touch either of us had ever known. And he did not resist, as he usually did, but lay where I had pulled him, against my chest. And I realized that my heart was beating in an awful way and that Joey was trembling against me and the light in the room was very bright and hot. I started to move and to make some kind of joke but Joey mumbled something and I put my head down to hear. Joey raised his head as I lowered mine and we kissed, as it were, by accident. Then, for the first time in my life, I was really aware of another person’s body, of another person’s smell. We had our arms around each other. It was like holding in my hand some rare, exhausted, nearly doomed bird which I had miraculously happened to find. I was very frightened; I am sure he was frightened too, and we shut our eyes. To remember it so clearly, so painfully tonight tells me that I have never for an instant truly forgotten it. I feel in myself now a faint, a dreadful stirring of what so overwhelmingly stirred in me then, great thirsty heat, and trembling, and tenderness so painful I thought my heart would burst. But out of this astounding, intolerable pain came joy; we gave each other joy that night. It seemed, then, that a lifetime would not be long enough for me to act with Joey the act of love.

Fear of Flying, Erica Jong (1973)
Then we become aware only of the bouncing of the train and the rhythmic way the soldier’s thighs are rubbing against the thighs of the widow. Of course, he is also rubbing against the haunches of the fat lady—and she is trying to move away from him—which is quite unnecessary because he is unaware of her haunches. He is watching the large gold cross between the widow’s breasts swing back and forth in her deep cleavage. Bump. Pause. Bump. It hits one moist breast and then the other. It seems to hesitate in between as if paralyzed between two repelling magnets. The pit and the pendulum. He is hypnotized. She stares out the window, looking at each olive tree as if she had never seen olive trees before. He rises awkwardly, half-bows to the ladies, and struggles to open the window. When he sits down again his arm accidentally grazes the widow’s belly. She appears not to notice. He rests his left hand on the seat between his thigh and hers and begins to wind rubber fingers around and under the soft flesh of her thigh. She continues staring at each olive tree as if she were God and had just made them and were wondering what to call them.

Meanwhile the enormously fat lady is packing away her pulp romance in an iridescent green plastic string bag full of smelly cheeses and blackening bananas. And the grandmother is rolling ends of salami in greasy newspaper. The mother is putting on the little girl’s sweater and wiping her face with a handkerchief, lovingly moistened with maternal spittle. The train screeches to a stop in a town called (perhaps) PRIZZI, and the fat lady, the mother, the grandmother, and the little girl leave the compartment. Then the train begins to move again. The gold cross begins to bump, pause, bump between the widow’s moist breasts, the fingers begin to curl under the widow’s thighs, the widow continues to stare at the olive trees. Then the fingers are sliding between her thighs and they are parting her thighs, and they are moving upward into the fleshy gap between her heavy black stockings and her garters, and they are sliding up under her garters into the damp unpantied place between her legs.

The train enters a galleria, or tunnel, and in the semi-darkness the symbolism is consummated.

There is the soldier’s boot in the air and the dark walls of the tunnel and the hypnotic rocking of the train and the long high whistle as it finally emerges.

Baldwin’s is better because it seems surprising and mysterious and less in charge and I’m bugged by all the social categories in Erica Jong, and the dislike, even revulsion, for the female—like sex has something to do with self-hate (which it could)… but I find her way of sorting bodies distancing.

Eileen Myles (they/them) came to New York from Boston in 1974 to be a poet. Their books include For Now, I Must Be Living Twice/new and selected poems, and Chelsea Girls. Pathetic Literature, which they edited, will be out from Grove in Fall 2022. Myles has received a Guggenheim Fellowship and in 2021 was elected a member of the American Academy of Arts & Letters. They live in New York and Marfa, TX.
Share: 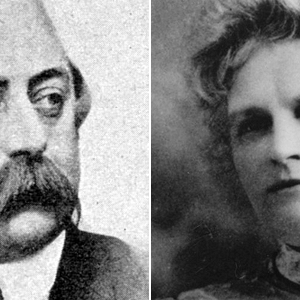 The Tournament of Literary Sex Writing: Gustave Flaubert vs. Kate Chopin ERA I: Everything prior to the 1922 publication of James Joyce’s Ulysses. GUSTAVE FLAUBERT VS. KATE CHOPIN Kate Chopin, "The...
© LitHub
Back to top