The Time I Spent the Night in Hamlet’s Castle

M.L. Rio Goes Looking for Ghosts on the Battlements

I spent the last anniversary of Shakespeare’s death in a Danish castle, the first person to do that in a hundred years (or two hundred, depending which tour guide you ask). This is undoubtedly among the strangest things I’ve done in my life, and because my memories of it have the chimerical quality of dreams, sometimes it doesn’t seem real. But every now and then my friend Margaret and I—who went along as my plus one—will look at each other and one of us will say, “Remember that time we went to Denmark and slept in a castle?” We really did. And it was wild.

Every time I try to explain how this whole thing came about I get the details mixed up, because it was a long, bewildering series of events. The short version is that I won a contest hosted by Airbnb, where entrants were invited to explain why they wanted to spend the 400th anniversary of William Shakespeare’s death at Kronborg Castle—better known to the English-speaking world as Elsinore. At the time I was just about to finish my master’s degree in Shakespeare Studies, so I had plenty of answers for that. (They can be summed up as follows: I am a huge nerd.) I wrote my application in iambic pentameter (because I am a huge nerd but also a showoff), hit SEND, and promptly forgot about it. Two weeks later my phone rang and it was Denmark on the line. Another two weeks later, Margaret and I were emerging from a wind-blasted train station to startling sunlight and the frankly mind-boggling shape of the castle across the water.

What we didn’t fully appreciate until we were on the ground in Denmark was the scope of the events planned. We were taken on a private tour of the castle, interviewed by several different news crews, and escorted to the penultimate performance of Globe to Globe Hamlet in the Kronborg banquet hall, with Queen Margrethe II sitting in the front row. And that was just the first day. On Day Two, between more interviews and scrambling to get our term papers (due the same week) done and dusted, we ran around our hotel room, throwing clothes on and off and asking one another, “What the hell are you supposed to wear to a Renaissance banquet in an actual castle?” (A ruff. The correct answer is “a ruff.”)

When we arrived, we were relieved to find that there seemed to be no dress code—some people were in black tie, some in full Renaissance regalia, some in lavish costumes that didn’t have anything to do with Denmark, Hamlet, or the Renaissance (from what I could tell). We wandered through the winding, labyrinthine halls of Kronborg until we found ourselves once again in the banquet hall, where eight or ten long tables cluttered with glasses and silver and piles of Shakespearean paraphernalia were waiting to receive us. (I stole a paper doll of the Danish prince. I’m not proud of this but I don’t regret it either.) We sat elbow to elbow with Rufus Gifford (the US Ambassador to Denmark and unbeknownst to me until that point, the runner-up in the Airbnb contest) through seven courses of real Renaissance recipes (including gargantuan white asparagus and what might have been quail eggs; I’m still not entirely sure what we ate since the entire menu was in Danish) and at least that many rounds of wine, the meal interrupted every quarter hour or so for musical interludes, speeches in English and Danish, a fencing match, and a performance by the Danish Royal Ballet. By the time the last flights of desserts were being cleared away, the whole banquet hall had filled with music and the lights had been lowered, so everyone could carry on partying like it was 1599.

I have no idea what time it was when we finally stumbled up the spiral staircase to the tower where we would be sleeping—with no electricity, no running water, and not another soul about except the security guard in the anteroom below. We went through the incongruously mundane motions of brushing our teeth and putting our pajamas on, but in a castle. For a while we sat down on the foot of our beautiful four-poster bed and just looked around the room—the somber stone walls, the long beautiful windows, the dark shadow of Sweden across the water, the by-now-familiar skull on the table, the candles flickering in the fireplace. There had been no shortage of jokes about ghosts on the battlements throughout the day, and in our dazed (and I will admit, more than a little drunk) condition, it was impossible not to wonder whether the place really was haunted.

I decided it probably was and, unperturbed by that, slept like a baby. I woke up to the gold gauzy light of dawn streaming in through those magnificent windows, faintly surprised to find that I hadn’t just imagined the whole thing, like the lovers waking in bewilderment at the end of A Midsummer Night’s Dream. It was early still—we had a train to catch at about 6 am—and I got to watch the sun rise over the water, the shadows of the castle towers shifting and changing shape on the ground below. Even in the moment it felt unreal, and the idea of returning to my all-too-real everyday life as a graduate student in London was almost painful. It’s hard to get a little taste of magic and have to walk away, not knowing if you’ll ever encounter it again. But at least, I thought, we’ll always have Hamlet.

A year later, when I think about Denmark, it is almost always with a flicker of uncertainty—like it’s one of those stories that you’ve told so many times you start to remember it the way you tell it instead of the way it actually happened, or like a lie you’ve told so many times that you’ve nearly convinced yourself it’s the truth, or like something you could have sworn you saw from the corner of your eye but disappeared as soon as you turned to get a closer look. There is, of course, physical evidence that it happened: pictures and articles and interviews that I can pull up with a few clicks of the mouse. But I usually don’t, because I’ve found that I prefer the uncanny unrealness of it. Every time I open a copy of Hamlet now, I wander through Kronborg’s familiar corridors. It haunts me benevolently, like a friendly ghost who instead of trying to frighten you simply fetches lost socks from under the bed or hangs your keys up where you can find them in the morning.

That, I think, is a clumsy but accurate analogy for my lifelong relationship with the Bard. The avuncular specter of Shakespeare has been peering over my shoulder since I was eight or nine and falling in love with his plays for the first time. As I sink deeper and deeper in the quagmire of academia, he’s always there to throw me a rope. He’s my familiar. And he haunts you too, whether you realize it or not. He’s literally everywhere—in rap lyrics and soft drink slogans and James Bond movies. His plays have been performed in every country in the world and translated into every language (including Klingon). He has been quoted by everyone, from Aldous Huxley to the Eagles. He is ubiquitous. He is sneaky and cheeky and still playing daily pranks on the English language like some sort of linguistic poltergeist. If he weren’t so eloquent, it might even be annoying. But that, more than anything else, is what I think about when I think about Denmark: the fact that it’s been 400 years and we’re still borrowing Shakespeare’s words, because in that amount of time nobody has said any of it any better. Shakespeare is timeless. That may be a romantic notion and even a hackneyed one, but it is also (small virtue) true.

In the poem I submitted for the Airbnb contest, I referenced an item of early modern lore which may be simply that. We know Shakespeare was not only a playwright, but also an actor. And while many best guesses have been made as to what roles he might have played, the only contemporary account we really have to work with suggests that he played the ghost of Hamlet’s father. If he did, he stood on a stage somewhere in London at the turn of the 17th century and said, “Remember me.”

M. L. Rio has worked in bookstores and theaters for years, and is currently pursuing her MA in Shakespeare Studies at King’s College London. If We Were Villains is her debut novel. 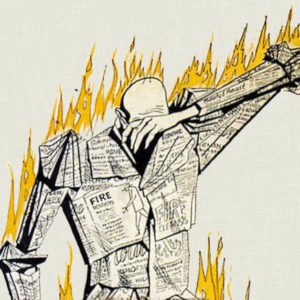 This week in literary film and television news, magic was in the air. We got news of adaptations of work by giants of fantasy...
© LitHub
Back to top