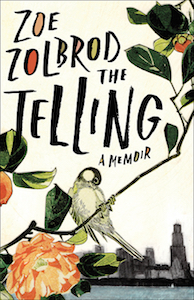 The following is from Zoe Zolbrod’s memoir, The Telling. Zoe Zolbrod’s work has appeared in Salon, The Nervous Breakdown, The Weeklings, and The Rumpus, where she serves as Sunday Editor. Her debut novel Currency won a 2010 Nobbie Award and received an honorable mention by Friends of American Writers. Zoe lives in Evanston, IL with her husband, son, and daughter.

I got an extra month of maternity leave when my first child was born, and before I went back to work and Anthony quit his job to stay home with our son, we flew to Albuquerque to visit my family.

In the photos from that trip, my shirt is a collage of wet spots of indiscriminate origin. My baby and I were a sloshing pair, our fluids still intertwined. His incessant screaming and crying did not yet yield tears, but it made us both sweat, and my breasts spurted and leaked, and he was plump and a profuse drooler. After a hard few months with a distressed infant, I found it a pleasure to be in dry, sunny New Mexico where at least liquid evaporated quickly and where there were people who shared our awe for the baby. My parents had been divorced for about a dozen years, but they came together to coo at their grandson. Being in the same room with the two of them eased an ache I hadn’t allowed myself to acknowledge. Anthony and I even felt confident enough to go to a movie alone, to make a visit to an adjoining town.

Mostly, though, our days were quiet, structured around our son’s fledgling sleep schedule. At naptimes, a hush fell over everything. My mom’s house was on the newer side of town, in a development built on a hill, each street sitting above the other so as to maximize views of the Sangre de Cristo Mountains to the east. The living room section of her first floor was two stories high, with tall windows and skylights. That’s where we sat during one naptime toward the end of the visit, going through the bags and bins of baby clothes that my mom had collected from clearance sales and second-hand stores. We knelt on the Berber carpeting and sorted the little jackets and jeans and sleepers into piles—yes, no, now, later, to return, to resell.

“So did you hear about Toshi?” she asked me.

The name of my older cousin sent a hot shock through my body. I hadn’t heard it spoken out loud in seven years, since I’d told my parents that he’d sexually abused me during the time he’d lived with us as a teenager. After a few stumbling conversations back then, neither my mom nor my dad had mentioned it again, and I’d ceased talking specifically of Toshi to anyone. I stared at the teddy bear face embroidered on the onesie in my hand and braced myself. “Hear what?”

“He’s been charged with molesting a girl.” She paused. “Or maybe there was more than one. Two?”

I saw an obliterating brightness before I fully comprehended what she had said, but then: “Oh my God.”

What I recall feeling first was a stomach-plunging sense of clarity, almost vindication. Hoisted up from the depths of my mind was the bundle of questions that had dogged me on and off all my life, and here was some kind of answer: what he had done to me was serious. It fit a pattern; it made a horrible kind of sense. But then guilt washed over me. Articulated thoughts would come later, in the hours and weeks and months to come, but the guilt flooded in immediately.

I had not stopped him.

“I’m surprised your dad didn’t tell you. He’s the one who told me.”

I took this as a dig at my father and bristled, even as I absorbed the slap of the fact: he’d said nothing.

“When did it happen?” I strove to keep my voice level.

“I don’t know exactly. A while ago. I guess it’s taken a long time to go to trial. It’s not clear that he did it.”

“I know. It’s awful. It’s really awful.” Her brow crinkled; she looked sad and vulnerable. Whenever I hugged her I was always surprised at how small she felt. Smaller than me. We didn’t hug now.

“I’m surprised your dad didn’t tell you, but he probably feels guilty. He always felt so guilty about Toshi, because he helped kidnap him from his mom.”

“What?” Another explosion. Another burst of annihilating white light. My story about myself—my stories, any of them, the new one just forming—was shattered.

“How did it go? Oh, I have no memory. Morris and his wife were already separated, and maybe divorced. And he asked Dad to go over to her place and take him? Or they both did it one night. I can’t remember. But I think he always felt guilty about that.”

“What? How old was Toshi?” My voice was ragged.

“Well, was he two or three? Or wait, it had to be after Haruna was born, so older. I think Morris already had Haruna somehow, even though she was just a baby, and now they were going in for Toshi?”

“Then he would have been about five.” The same age I turned during the year he’d spent sneaking into my bedroom.

“I can hardly remember anything about it. Oh, I have no memory!”

I have no memory. It was a phrase she said often—usually declaratively, definitively, but right now quite plaintively—all through my life.

My memory, on the other hand, was strong.

“Was this when Morris was living in New York?”

But she had nothing else to give me. She’d told me all she knew.

“Would you mind folding the rest of these?” I asked her. “I want to go lie down.”

My mother’s pretty house was also small and somewhat flimsy. The railing on the open stairway wobbled slightly. The hollow-core doors had no heft, so opening the one to the guest room felt like moving a slab of felt. The room was almost entirely taken up by the pull-out bed on which Anthony and the baby lay sleeping. I didn’t want to touch or talk to Anthony, or any adult. I wanted to wrap my body around my son, who lay on his belly with his knees tucked under him, his back hunched like a turtle shell. I perched on the edge of the bed so as not to disturb him and waited for him to wake.

The sight of his sleep-flushed cheeks and pursed little lips soothed my heart for a moment, but even this joy was painful. My skin hurt from loving him. My breasts ached and pulled toward him; it’d been almost three hours since he’d nursed. Through the rest of my body ran a pulsating siren of panic, some mix of abandonment and rage and grief and guilt and utter confusion that I could hardly bear. The stuffy room, the silent house, and all this roar of emotion.

And then his tiny face scrunched, his arm shot out and his butt lifted. He gave one mewing cry, and I gathered him to me and lifted my shirt. His body softened into mine and my milk came down with a narcotic rush. I felt almost histrionically sanctimonious. I was a mother. I was feeding my child. He was safe in my arms.

If I had told I could have saved that girl.

No one said it was.

I conjured an image of Toshi as a befuddled, stick-limbed boy being hustled out of a basement apartment in the dead of a warm autumn night. His mother! He’s going to need his mother! Was I more worried for that boy or for the girl or for myself or for the baby in my arms who embodied the vulnerability of us all?

Abandonment stunned me again, and the rootedness of nursing began to feel like a burden. I was trapped on the bed when I wanted to twitch away, to run, walk for miles, to leave this family behind and lick my wounds in private, make of them something else. But I couldn’t.

The baby’s sucking slowed to a nibble. He dozed; I sat, stuck, roiling. Four months into parenting, and already the contrast between physical constraint and a churning mind had become characteristic of the venture for me, but I’d not yet felt it to this extent. I sat within a tent of love and agony and impatience, the small space filling with my hot breath, the arrhythmic pulse of our two hearts. And then he roused again. He arched his back and twisted his face and gave a bleating cry. He dove to my breast for comfort and rooted furiously. I felt the letdown, but he was beyond the help of milk. In fact, it made it worse. He pulled away. He was full-bellied and in pain. I elevated him and patted back his to soothe him, but it was no use.

There was acid in his belly. There was acid rising up our throats. It stings. It burns. Where do we turn for succor? Here? There? Nothing works. The sleeping house filled with screams.

From THE TELLING. Used with permission of Curbside Splendor. Copyright © 2015 by Zoe Zolbrod. 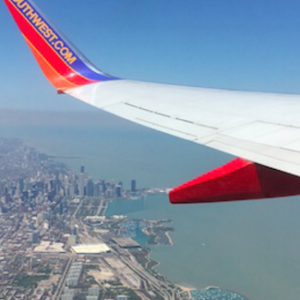 Going Nowhere: A Book Tour Through America's Liminal Spaces It’s hard to know anything for sure, but my life will probably not include many weeks during which I drive across both...
© LitHub
Back to top