Translated From the Ukrainian by Amelia Glaser and Yuliya Ilchuk

In March 2022, the Polish novelist and Nobel laureate Olga Tokarczuk conducted a public interview with the Ukrainian poet Ostap Slyvynsky. The conversation, which was in English, one of their languages in common, found its way to language, and how war changes words. “I must say that I hate the word ‘peace,’” Slyvynsky told Tokarczuk. “When Russians use the word ‘peace’ and not the words ‘war,’ ‘aggression’ … it’s too neutral. It’s not enough.”

Ostap Slyvynsky is a poet’s poet. He is also a professor of Polish literature, and in his verse and scholarship he is highly attuned to the nuances of words and the silences between them. His dissertation was about the phenomenon of silence in post-war Bulgarian literature. His poetry sometimes presents words poised between diametrically opposed meanings. Just as the word “peace” assumes a grim meaning in a time of war, “the word ‘probably’… perpetually affirms and doubts.”

Poetry is not a declamatory genre for Slyvynsky, but part of an ongoing conversation. Despite the many differences in our syntax, he explained in a 2017 interview, “people still communicate with each other, they try to understand each other and try to depict a common reality.”

In Slyvynsky’s verse, conversations take place not only at the level of the word and line, but also on a large, historical stage. Orpheus is an alienated child, afraid of the water, whose anxiety accidentally yields art:

You know this kid?
You know at what point
music comes out of anger, like a butterfly
emerging out of a frostbitten cocoon?

–Translated from the Ukrainian by Anton Tenser and Tatiana Filimonova

The biblical Lot’s wife looks back, not so much at her ravaged city, but at her lost adolescence. She becomes a pillar less of salt than of silence, resigned to alienation from her loved ones.

Now the whole desert is Lot’s empty house.
And there is no door before me, and no door behind,
and no windows from which to dry my sisters’ shirts.

In her conversation with Slyvynsky, Olga Tokarczuk suggested that one of many casualties of war is the change in language—the tendency to become harsher, more polarized, “this language that is not subtle and delicate.” Slyvynsky’s response has been to embrace the silence that has long been part of his poetic toolkit, to give up his right to language at a time when others are closer to the violence wrought on Ukraine and its words.

Since Russia’s violent invasion of Ukraine in late February 2022, he has compiled a “war lexicon” (#словниквійни). Slyvynsky drew inspiration from Czeslaw Milosz, whose 1943 “The World. A Naive Poem” is based on a series of key words. But unlike Milosz’s “World,” Slyvynsky’s Lexicon is made up of others’ words, which he and others have heard “at the Lviv railway station … in temporary shelters, even just on the street, people talk near coffee booths.”

An entry for “plums,” narrated by Vika of Mariupol, describes an elderly woman attempting to defend plum trees from the invading soldiers. An entry for “shower” is told by Alexander of Bucha: “I do not recommend taking a shower during heavy shelling,” it begins. “Words don’t come out innocent,” Slyvynsky explained in a preface to one dictionary entry he posted to Facebook. (Tilda Swinton, Alan Cummings, and others read several of these entries aloud during the Deep Water Festival on June 19, 2022.)

Poetry, at its best, can create and define an interpretive community, exposing its shared language and memories along with its conflicts. Phrases that bear the weight of history are carried into the present. In a 2021 poem, Slyvynsky cites the term “naked sky” (голе небо, here translated “homeless sky”), which has been used as a passphrase for the sudden homelessness of nearly 500,000 Ukrainians deported from Poland during World War II.

Language can help to root a nation often defined by dislocations and displacements. In another poem, Slyvynsky tasks a country’s diverse, overlapping, and sometimes rootless communities with making a place into a home.

–Amelia Glaser, Cambridge, MA, with thanks to Yuliya Ilchuk.
This is part nine of a series of contemporary poetry from Ukraine.

Infinity is pointless,
like the wasteland out the window, where dust eternally roams
and stray dogs sleep. Once
our parents built houses
too close to infinity.
We inhaled it for too long, slept in its
embrace, carried it in our pocket like a chestnut
we’d been given by a girl who—if not life itself—
would become our life.
It falls from our throat when we sing,
falls from our mouth, like wheezing, when we have to say its name,
falls from our pockets, when they check us
at the border. They know they can’t let us in,
because with this kind of baggage
all our borders are internal, that is, impassable
We would leave it behind, if only we knew how
to tidy up after ourselves. Invisible as gas,
it ignites from the slightest spark
that catches between us and refuses to go out,
and clings to us like a drowning man, like fire
that can’t exist without a tree,
or like a tree, that can’t exist without fire.

Going east is like digging deep,
maybe the truth is we didn’t stop ourselves in time,
like a crazed mole who doesn’t notice
that its paws are burning, that toxic gold has replaced the darkness?
Have we failed geography, like a student in that textbook nightmare?
Have we begun building near the earth’s mantle, consoling ourselves that we’ll have
free heating?
So what now? What will we do with our bedridden loved ones, with the ones
perpetually absent? Who, besides fire,
will want to pay us a visit? Maybe
it’s up to us, the crawling vines, to set roots for our homeland,
this off-market real estate,
this overheated wall, beside which we were born:
it’s up to you, brother-ivy, it’s up to you, fertile vine,
it’s up to you, climbing rose.

The foggy morning sky in late February is
like a band of untanned forearm on someone sleeping,
innocent, though he may have killed or betrayed in his dream;
the sky is innocent.
Like an infant who spilled milk,
like a kitten who scratched her master’s hand,
even over Birkenau, even over the Kabul airport,
the sky is innocent.
Before those who narrow their eyes when a book falls from a table
in the next room, the sky is innocent.
That an incompetent spokesman and
corrupt deputies were elected, the sky is not to blame,
humans aren’t supposed to be its expertise.
That, having run a long way, we fall rather than fly,
the sky is not to blame.
I and that “homeless sky,” beneath which my grandfather slept
during the harvest and the long summer revelry,
curl ourselves into a ball as tight as we can,
and fall asleep carefully,
so as not to hurt each other.

Word-breath, unfinished
as a drawing made by a child who nodded off,
word-wave in a foggy wharf,
word, formed on the lips,
like wings on an insect, that will never know why it exists,
the word “probably,” that perpetually affirms and doubts,
the word, defenseless,
like an old dog that’s lost its sense of smell and follows the light,
the word like the din coming from a window, full of other people’s youth,
the word that begins every love,
even if it’s uttered at the end,
the word that closes love’s eyelids
will stay when all the other words
come apart, the way seams come apart and dull gatherings,
and it will shine for us long into twilight, into daybreak.

Up ahead it’s just Lot,
who gave our daughters to the lustful mob
to protect a couple of functionaries on a business trip.
He would have given me away too, but I’m too old.
My hands have wiped all our children’s butts,
so I wasn’t worthy of baking bread for the angels.
My bread is warm, but it’s dirty,
like the calloused soles of feet.
My bread goes stale fast.
Go,—he said—I’ll bake the bread myself, for
a man should be to God
what a woman is to a man. Now
I am gazing back at the city,
for the rocks were there, where my girlfriends and I
secretly drank the wine of a quiet autumn.
There were white dishes that cooled my hands.
Once a week, even I, a stranger, could
submerge in the green pond, as the moon made us into sisters,
and we illuminated one another like autumn trees.
How naturally our bodies sang, waking to one more
day of sun, how highly we valued our feast,
which we offered up to them, the satyrs.
And from time to time it was good to accept their awkward invitation
to mount a hairy back and ride to that place, where
hasty goodbyes buzzed beneath the trees.
And to run a long way after those voices, while Lot slept, and
to sing lullabies to my daughters in the little Canaanite tongue,
in that feminine dialect that burned along with our clothes.
Now the whole desert is Lot’s empty house.
And there is no door before me, and no door behind,
and no windows from which to dry my sisters’ shirts.
All I can do is keep so powerfully silent that those two won’t hear,
walking side by side, like a convoy, so they won’t even ask
my name.

Ostap Slyvynsky is a poet, translator, and literary scholar from Lviv, where he teaches Polish literature and literary theory at the Ivan Franko University. He has published six volumes of poetry, as well as over a dozen translations from Polish, English, Bulgarian, and Russian. He has been awarded, among other prizes, the LitAccent award, the Anonych Literary Prize, the Hubert Burda Prize for young poets from Eastern Europe, the Medal for Merit to Polish Culture, and the Kovaliv Fund Prize. He has coordinated the Publishers Forum Literary Festival in Lviv. 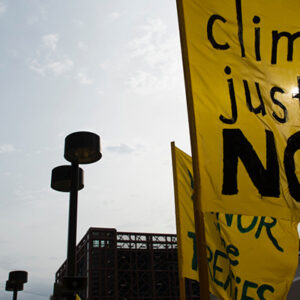 In Talking—and Writing—About the Climate Crisis, We Need to Make Space for Our Flaws How do we talk about climate change? Among certain groups, and in some corners of the internet, it can feel like no one is talking...
© LitHub
Back to top