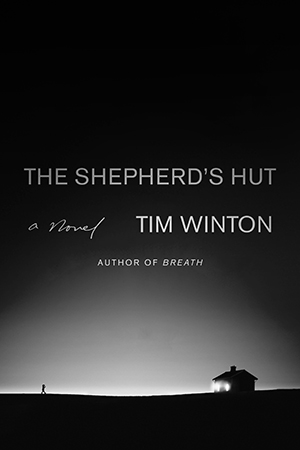 The following is from Tim Winton's novel, The Shepherd’s Hut. After his father's violent death, Jaxie Clackton is on the run. With only a rifle and a water jug, he's headed for the vast and desolate land of Western Australia. Tim Winton won the Australian/Vogel Award in 1981 for his first novel, An Open Swimmer. His novels The Riders and Dirt Music were both short-listed for the Booker Prize.

When I hit the bitumen and get that smooth grey rumble going under me everything’s hell different. Like I’m in a fresh new world all slick and flat and easy. Even with the engine working up a howl and the wind flogging in the window the sounds are real soft and pillowy. Civilized I mean. Like you’re still on the earth but you don’t hardly notice it anymore. And that’s hectic. You’d think I never got in a car before. But when you’ve hoofed it like a dirty goat all these weeks and months, when you’ve had the stony slow prickle-up hard country right in your face that long it’s bloody sudden. Some crazy shit, I tell you. Brings on this angel feeling. Like you’re just one arrow of light.

And bugger me, here I am hitting a hundred already and still not even in top gear. On squishy upholstery, with one of them piney tree things jiggling off the mirror. I’m flying. And just sitting on me arse to do it. Off the ground. Out of the dirt. And I’m no kind of beast anymore.

So what does that make me? Someone you won’t see coming, that’s what. Something you can’t hardly imagine.

Say I hit your number, called you up, you’d wonder what the fuck, every one of youse, and your mouth’d go dry. Maybe you’re just some stranger I pocket-dialled. Or one of them shitheads from school I could look for. Any of youse heard my voice now you’d think it was weather. Or a bird screaming. You’d be sweating sand. Like I’m the end of the world.

Well, no need to worry. I don’t forgive you, none of youse, but I’m over all that now. You’re all in the past.

Me phone’s flat anyway. Plugged into the dash, charging or dying, I dunno which. So relax, I’m not calling. Everything’s changed. I’m not what I was. All I am now is a fresh idea fanging north up the highway to where it’s hot and safe and secret. I got someone to collect. In Magnet. She’ll be waiting and ready. Least I hope so.

Fifth gear. It took a few goes to find but I’m there now. With red dirt flashing by. Mulga scrub. Glinty stones. Roadkill crows. The Jeep reeks from all them sloshing jerry cans in the back. But the windows are open and the wind is warm and the stink of petrol beats the smell of blood any day.

All of a sudden I’m hungry. I get the .410 by the neck and heave it over on the back seat. I shove the box of shells away to get at the food and it’s still warm on the tin plate. It’s good and greasy and tastes of smoke. From the first swallow I get a hot charge.

And I drive like that, just under the limit, with a chop in one hand and the wheel in the other. Laughing hard enough to choke. For the first time in me life I know what I want and I have what it takes to get me there. If you never experienced that I feel sorry for you.

But it wasn’t always like this. I been through fire to get here. I seen things and done things and had shit done to me you couldn’t barely credit. So be happy for me. And for fucksake don’t get in my way.

From The Shepherd’s Hut. Used with permission of Farrar, Straus and Giroux. Copyright © 2018 by Tim Winton.

The Hospital When I walked through the large iron gate of the hospital, I must have still been alive. At least that’s what I believed...
© LitHub
Back to top