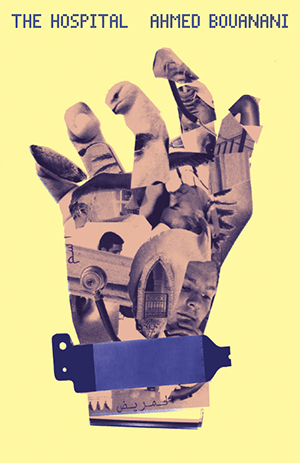 The following is from Ahmed Bouanani's novel, The Hospital. This hospital feels increasingly nightmarish—the living look like corpses, angels appear to claim the lives of patients, and eventually the entryway disappears altogether. Based on Bouanani's experience as a tuberculosis patient, this is the first time The Hospital has been translated into English. Bouanani (1938–2011) was a Moroccan filmmaker and writer, best-known for the film The Mirage.

When I walked through the large iron gate of the hospital, I must have still been alive. At least that’s what I believed since I could smell the scents of a city on my skin, a city that I would never see again.

As naturally as could be, I had fallen in behind one of death’s slow employees, I had added my name to a yellow sheet already covered with flyspecks, I had said thank you four or five times to heads nodding at me behind screens in tiny, enclosed spaces where decades of paperwork and x-rays were piling up on dusty shelves; and, as naturally as could be, I hadn’t bothered to turn around in the large hallway to salute life one last time. I had abruptly found myself in another silence—later I’ll call it the silence of a jar—on a planet inhabited by caricatures of aging men, ghosts cloaked in coarse linen, happy as trees or rocks, resigned even to their vomit. The nurse leading me to C Wing proudly wore a Swiss watch on his wrist, undoubtedly purchased on the black market. As we walked, he’d announced the time twice to the groups of invalids slumped on the ground or straddling the low walls. I felt that perhaps this was his reason for being. Not only did he shout out the time, but he also took care to specify the seconds—and thousandths of seconds—to men frozen here for days or weeks and who seemed to harbor all the necessary indifference to the passage of time and changes in the calendar. Was it his way of distancing himself from this ailing humanity? To show them that he belonged to a realm of greater energy, vitality, and life?

I kept moving as if in a fog, at the end of which the men in white were waiting, I kept moving in a day that could not exist, telling myself: I am not afraid of hell, no not the hell promised by the holy verses, but a hell without flames, without cannibalistic cooking pots, where they inject you, in small doses, with a slow death. Here, everything is foreseen, custom-built for us, it’s normal that we are rewarded with a pitiful death, beneath tons of indifference and oblivion.

To those watching, a drowned body rejected by the waves takes on the attributes of a monster—you turn away in disgust, or else observe at a distance, silent and respectful. Under the summer sun, the corpse is protected by anonymity. In horror, you imagine the multitude of creatures that fiercely tore into its skin and eyes, the small fish with sharp teeth who slid between still growing strands of hair.

“My corpse doesn’t bother me. I examine his festering wounds without self-pity. I can’t resurrect him, I’ve forgotten too much.”

The child whose name I once shared, now having taken charge of my sickly body, my face, my memory, resembles in every way this heaving form, stripped of all substance, which the ocean offers up to the astonishment of the living. To describe him I have only photographs in which he invariably adopts an awkward and timid pose. With such flimsy testimonies, it’s hard not to smile, not to feel an emptiness in your gut. As for the imposter, he obsequiously drapes the corpse in a silk shroud. He rarely shows his true face. Instead his dates, places, and stories glisten like enamel, like the pure chrome of an engine.

My corpse doesn’t bother me. I examine his festering wounds without self-pity. I can’t resurrect him, I’ve forgotten too much. I suspect that, at the threshold of a poorly moored adolescence, my younger self destroyed his tiny world with a brutal kick in the teeth.

A labyrinth is waiting for me, full of dead-ends, blocked by the efforts of that damn wisp of straw whose corpse, out of time, taunts me with the smile of unshakeable death. Here in this hospital, will I end up like the pilgrim dreaming of riches who, upon waking, shows me his penniless hands, minus a finger or thumb?

I admit to being a great amnesiac. My memories resemble ruins eroded day after day. The child that I used to be, within that distant edifice, has nearly erased all the faces, carefully rubbed away the events, the words, but he couldn’t entirely destroy the memory of winters of tantalizingly frozen waters, or those of magnificent summers where the ocean beckons like a pleasure now forbidden to my fragile and sensitive body. Despite him, the homes of my childhood linger in smells that refuse to dissipate, in subtle noises, muffled until they’re nothing but silences, infinite stretches of silence along which I struggle to put myself back together. And even when the miracle works, when a faint glow pierces the bedroom curtains and I see myself prostrate on a sheepskin stained with henna, miming one of the five daily prayers with a frightened fervor, my eyes blink, suddenly damp; the reflection of my image framed in a rectangular mirror with rounded edges then softens in the heat of the mirage. The child halts his prayer, lifts his head. Lines interrupt the serenity of his forehead. For a moment—an interlude of time that prolongs the flight of a fly—he searches himself, the taste of salt under his tongue. Something collapsed in the silence, with a motionless brutality. The child repeats the Quranic phrases in his head, turns them around in his mouth; the formulaic expressions take on the dull taste of things incomprehensible, opening up a void in which genuine hope, rid of the dross of legend, is nonetheless born. I rejoin my body just as the boy is being seized by wild joy. On the sheepskin, scarcely an eternity ago, the ancient wisdom of the stone filled me; now I break out in laughter that only I can hear; I stare at a ceiling that doesn’t collapse to punish me, and in the half-light of my childhood, for the last time, I see God’s grand stature crack, breaking without majesty, scattering in fragments around my peals of laughter.

Stretched out in my bed, I’m looking at another ceiling: between the two cement surfaces, time passed furiously, draining my life like an anonymous, faded, and empty shell.

It’s cold here too, like in my memory. No chance of nestling into the soft belly of an illusion. The hospital is a frozen body, walled in from every angle. Nothing survives here except bones and men pale as lice.

From The Hospital. Used with permission of New Directions. Copyright © 2018 by Ahmed Bouanani. 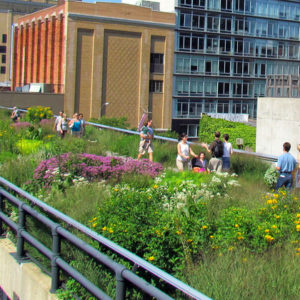 Now You Can Walk the High Line With a Tommy Pico Poem in Your Head If you’ve been in New York for any length of time, chances are you’ve heard about the High Line, the elevated freight...
© LitHub
Back to top