‘The Shell Garages History
of Mud’ 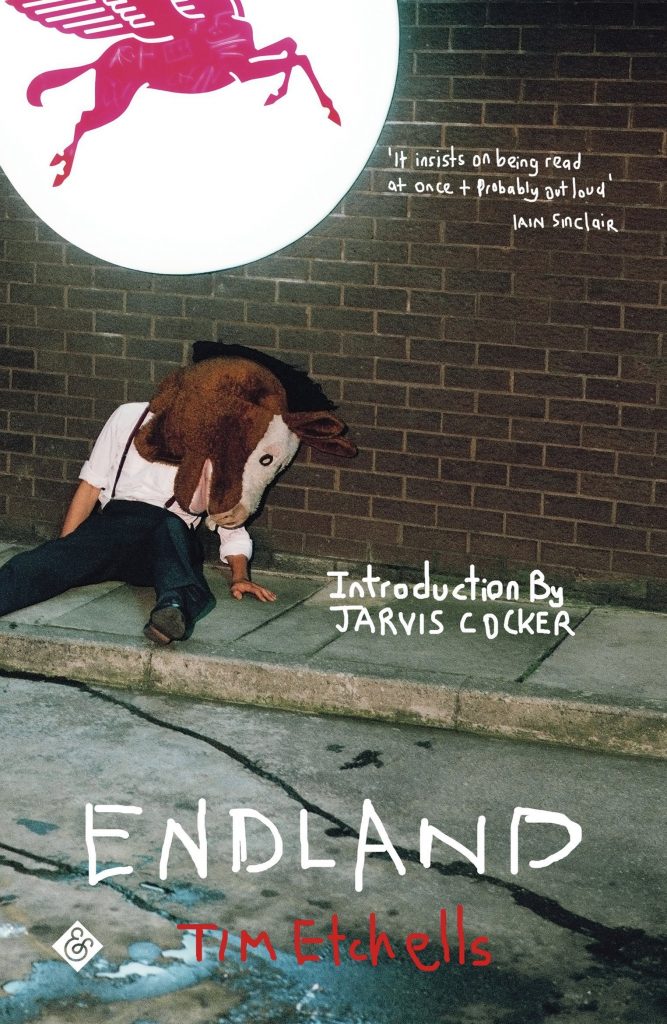 The following story is excerpted from Tim Etchells collection, Endland, a comical and brutal weave of parables gone wrong, holding a broken mirror to England. Etchells is an artist and writer based in Sheffield and London. He writes fiction and is currently Professor of Performance and Writing at Lancaster University.

Melanie lived near the park and when she reached puberty at age unlucky 13 she was often sneaking boys over the railings at nite and across the dark green grass and into the bouncy castle.

What they did in ther is no one else’s business but locals were often disturbed and complaining abt all sounds of sexual intercourse and stench of cider coming from the plastic portcullis doorway and even from a great distance (100m) you could see the turrets bouncing (hard) by moonlight at midnight.

All this happened before the famine.

Mel’s dad was a stupid intolerant cunt – that sort of bloke what spits on the ground for emphasis in a conversation, belches and only reads on the toilet. Anyway. When the general scandal abt Melanie reached big proportions on the estate he had ‘words’ with her and then ‘more words’ and then in the end ‘a lot of words’ ©.

– some blokes from the council went round writing HUNGER in the walls and Olde MacDonalds closed down and the place wer like a dump of olden times where people died of cholera, raisins, mumps, vertigo and Russian Mattress.

Mel and her dad took to eating at nite since local tradition dictated they had to give food to anyone arriving at meal- times and in this clever way they (like many others) lived lonely bitter thru the famine and survived. Indeed a strange nocturnal culture grew up in ther town (or so people sed) wher people scavenged all day and then ate like ghosts at nitetime, windows lit a dirty Ozram 40w orange in the dark.

Who gives a fuck.

Of course it dint take Mel long to work out a connection between sex and economics and thereafter her visits to the park and bouncy castle resumed. Mel took the towns chief of police into the bouncy castle (20 mins) and she took N******* W********* the corrupt local govt official from Land and Planning (43 mins) and loads of other persons too (on a average of 21 mins per person).

In this way Mel and her dad did not want no more for food no matter abt the state of the nation what twats were always talking about it and writing various plays. They were all right Jacko and had trebor mints and oven chips, chocolate eggs, juleps and Krazy Glue for omelettes and each alternate Sunday they had a whole chicken cooked factory- farmer style in Giant Diet Lilt.

Such were the days they called their ‘delicacy days’ ©.

One bloke that took a fancy to Mellers and liked to bounce her pretty often in the castle was called Vortex, a man 2-thirds human and 1-third god. In fact according to many people he was also 3-thirds dickhead as well but that is by the by. Anyway Vortex was down at earth on a spell of banishment following a minor indiscretion he’d had with

************ the thin blonde German girl whose name no one could remember and who Zeus was nobbing.

Vortex used to talk to Mellers in proper Roman English and kissed her with his tongue.

When Mellers was 21 she announced it to Vortex that she really wanted to leave her dad and be reunited with her mum who still lived on the other side of the world in ‘iceland’ or ‘freezer world’ or whatever.

Mellers and Vortex went to a party that had a fight, a break-up and people snogging in the toilet. While he was drunk Vortex sed he’d help Mellers get the airfare together to visit ‘freezer world’ but instead when sober he dipped into her savings and skipped off to Berlin to see a mate of his who was working as a site foreman at some of the recent building works at Potsdamn Platz.

Like the poets say ‘our private lives quite often get rewritten’ by the fallout of historical events happening hundreds (100s) even thousands (1,000s) of miles away.

With Vortex (and her savings) gone Mellers became depressed. She cried herself to sleep some nites and stared herself out in the mirror some days, high on a drug called Dunblane, skull full of bad bad dreams.

Ill luck followed ill luck. Her dad died in bungee-jumping accident, his house got bulldozed to make way for a by-pass and the bouncy castle got deflated as winter approached, a stain of dank looking grass beneath it providing the only ‘poignant reminder’ © of where the joys and great screws of her life had once been conducted.

Mellers began to collect books, esp the free ones you sometimes get at petrol stations. She liked PERPA-TRAITOR MONTHLY and another one called GODS BIG & LARGE WORLD OF NATURE but her fave of all was the SHELL GARAGES HISTORY OF MUD (part 1 in a series of 8). She loved the pictures in it and the words too, the  sexplanations of what mud actually is, why we need it, how it helps make the world a better place and stuff like that.

A local dignitary took pity on Mellers and allowed her to move into his house. He lived out twds Santa Monica (so not really in La La Land at all) but he was still a decent sort who remembered ‘life before the curfew’.

Life with the dignitary took some getting used to.

He had a car and a swimming pool. He had a gun and a telescope. He had a patio and two Japanese kids by a previous marriage what Mellers ended up looking after while  he was in various meetings about his parole.

The 2 kids (one 12 and one 16) spoke a kind of street Japanese that was a long way from the business class Japanish that Mellers had learned back at school. Anyhow, it was all exhausting and one night (after putting kids to bed) Mellers fell into a dozy sleep on the couch. Imagine this – the TV was on, playing one of those olde shows that ‘everyone’ loves and the patio door was open, a faint breeze stirring the windmills of her mind (?) . . . weird music played . . .

As Mellers slept so sweetly the gods in ‘heaven’ looked down and saw her and cried. Leia, Thor, Hand-Job, Trumpton and Asparagus took pity on her and sent down their winged messenger called Dumbo.

Fear not sed Dumbo, when Mellers woke up in a mighty dread, I am here to help you or so the legend goes . . .

Mellers was ‘all scared’ but soon adjusted to what was happening and even turned the TV down so she could hear properly. Dumbo lent Mellers her magic wings so she could fly across the world, visiting her mother and wrecking vengeance on Vortex.

In ‘freezer world’ Mellers stayed a long time with her mum, learning the old ways and sitting by the camping gaz campfire till dawn, singing songs and doing the actions that go with them.

Mellers and Leia in the woods, laughing, stalking real deer ©.

Mellers learning ITV magic, a book by Penn and Teller in one hand and a corpse of a rabbit in the other.

Mellers in a pub in Helsinki, telling jokes and falling drunk to the floor, dreaming of the gods agen, walking hand in hand with them and all crap like that.

Mellers comes flying into Vortex’s new place in Berlin sporting Dumbo’s wings and a hammer what she’s borrowed from Thor.

SHHHCCLUUP! goes his eyes popping out of his ‘head’. Ha, ha, ha, ha goes Mellers and all the gods in heaven.

Mud is a good and necessary thing. It makes the gutters be what they are and the basements of old buildings more interesting. Without mud the world would be a emptier and less enjoyable place.

“The Shell Garages History of Mud” from Endland by Tim Etchells is published by permission of And Other Stories, who published Endland in May 2020 in North America.

Julia Fierro, Brandon Harris, and Hannah Tinti on the Idea of Home

Janice Hadlow on Mary Bennet, the Overlooked Sister in Pride and Prejudice 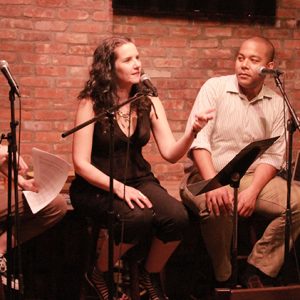 Julia Fierro, Brandon Harris, and Hannah Tinti on the Idea of Home Where is all of the literary love for Queens? It's right here at LIC Reading Series. Join them each week for stories, readings,...
© LitHub
Back to top