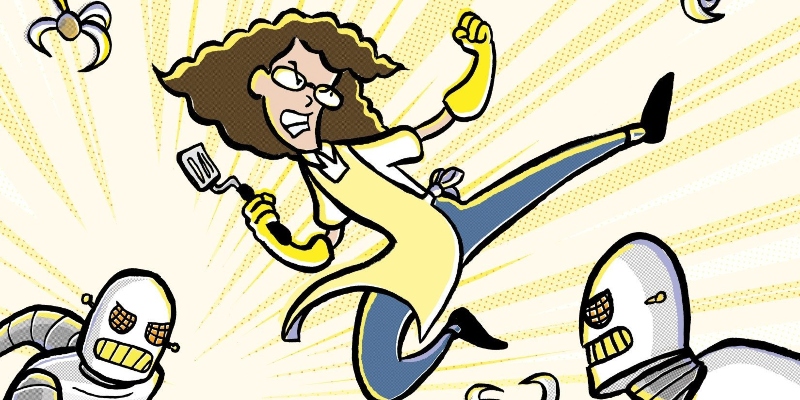 On this episode, Jennie and Marcy talk to Jarrett J. Krosoczka, author and illustrator of numerous children’s book series, most famously the Lunch Lady graphic novels.

Jarrett: The first book of Lunch Lady was published in the summer of 2009, so it had to percolate for a number of years before it was ready. I invited my old lunch lady, Jeanie, and I hadn’t seen her since that run-in in 2001. And I was taken aback by the resemblance between the character and the person. I think that’s because whatever we know from childhood, that will be forever what that thing is, whether that be the phys-ed teacher, the cafeteria workers, the first-grade teacher. Over the almost 20-year career that I’ve had, I’ve visited thousands of elementary schools, but still when I sit down to draw an elementary school classroom, it looks like the school I grew up attending.

Marcy: That makes perfect sense. What did she think of it, the resemblance?

Jennie: That’s incredibly sweet. You’ve probably heard this before, and it’s a grownup perspective on Lunch Lady, but I love that it’s a working class hero. She’s in a position that usually people don’t associate with any kind of power, and I just think it’s great that it’s a way to show kids that everyone around them is a person with a history and with talents and stuff like that.

Jarrett: Yeah, I appreciate that. Initially it was just that one-off joke of ha ha, how funny, it’s a lunch lady who fights crime. But then as I traveled the country, I would stop at schools and chat with the teams in the lunchrooms and learn so much more about what they do, and their humanity was just as much put into it as the silliness.

Jennie: I mean, if they’re not there and working as hard as they do, there’s not meals. And that’s something, of course, we’ve seen with the pandemic. It’s been thrown in high relief, who actually are heroes. And you were there first with the lunch lady one.

Jarrett: Yeah, they didn’t miss the beat and figured out ways to continue to feed the kids even if the kids weren’t coming into the school building.

Marcy: They’re doing that now in my school district. Still. They figured out a way to feed the kids lunch and breakfast every day, even if they’re not coming in to school.

Jarrett J. Krosoczka is a New York Times bestselling author, a two-time winner of the Children’s Choice Book Award for the Third to Fourth Grade Book of the Year, an Eisner award nominee, and the author and/or illustrator of more than 30 books for young readers. His critically acclaimed graphic novel memoir Hey, Kiddo was a National Book Award Finalist. His work includes several picture books, select volumes of Star Wars: Jedi Academy, the Lunch Lady graphic novels, and the Platypus Police Squad novel series. Jarrett has given two TED Talks, both of which have been curated to the main page of TED.com and have collectively accrued more than two million views online. He is also the host of The Book Report with JJK on SiriusXM’s Kids Place Live, a weekly segment celebrating books, authors, and reading. Jarrett lives in Western Massachusetts with his wife and children, and their pugs, Ralph and Frank. 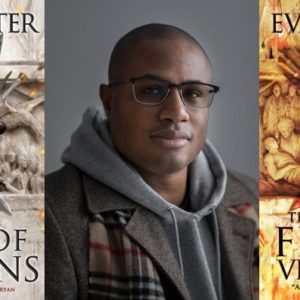 In order to reclaim her throne and save her people, an ousted queen must join forces with a young warrior in The Fires of Vengeance...
© LitHub
Back to top