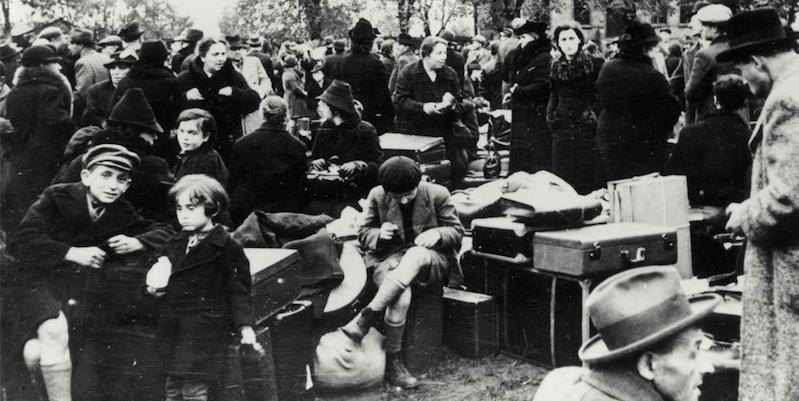 On the So-Called "Expellees" of Eastern Europe

The late 1940s and early 1950s were formative years in Europe’s migration history. Millions of uprooted people looked for somewhere to live where they could be safe. They included ethnic Germans who had been kicked out of their homes in countries such as Poland, Czechoslovakia, Hungary, and Romania. Their misfortune barely registered beyond Germany. In addition to these expellees, all of whom were dumped—there is no other word—in Germany, refugees continued to flee westwards in order to escape the strengthening grip of communist rule.

Given its location at the edge of the Iron Curtain, West Germany was the first destination they reached. By 1950, around 17 percent of the population of the three Western zones that eventually became the Federal Republic of Germany (FRG) were still classified either as expellees or refugees, 8 million people out of a total population of less than 48 million. The percentage was even higher in the Soviet zone of occupation (Sowjetische Besatzungszone, SBZ), which in 1949 became the German Democratic Republic (GDR).

Unlike the expellees, refugees gained international attention. Who, though, was a “refugee”? The International Refugee Organization in 1947 stipulated that a person qualified as a recognized refugee if he or she could make a credible claim to have suffered from or be at risk of political persecution. The emphasis on persecution carried over to the 1951 United Nations Convention Relating to the Status of Refugees, a document that remains a cornerstone of international refugee law.

The signatories agreed that persecution could only be claimed where it had taken place in Europe as a result of events from before January 1951. Anyone who gained refugee status could not be returned to their country of origin against their will.

The flight of refugees did not stop in 1951. People fleeing East Germany or other countries in the Soviet bloc crossed into West Germany. Regular reports appeared in the news media of artists, scholars, and others who fled communism by whatever means. Until the building of the Berlin Wall in 1961, there was a steady stream of these so-called escapees, who were welcomed as victims of communism, and even celebrated as heroic figures who had an important part to play in securing the West’s claims to moral superiority in the Cold War.

Nevertheless, whatever international law had to say, European governments were faced with the practical problems of how to accommodate the millions of new migrants who fled to the West. Sir John Hope Simpson, an acknowledged expert on refugees, stressed that a laisser-faire approach would exacerbate political instability across the continent: “Nor is peace safe while masses of people live in conditions intolerable in a civilized era. In Central Europe the ground lies ready prepared for the seed of revolutionary propaganda.”

The dilemmas also emerged in a wide-ranging article published in 1953 by the newly appointed UN High Commissioner for Refugees, the Dutch diplomat G.J. van Heuven Goedhart, in which he spoke of his responsibility to protect Europe’s “stateless wanderers” engaged on a “perilous journey.”

Resettlement, in his view, offered only a partial solution to the problem: if countries in northwestern Europe were willing to open their doors, well and good, but the most promising outcome would be the integration of refugees in West Germany, Austria, Italy, and Greece.

Certainly, for German expellees, local integration remained the only option. They did not fall within the mandate of the UNHCR, because member states did not consider them to have been persecuted and they had German nationality. Church leaders, such as those who spearheaded the World Council of Churches, denounced the decision to exclude the expellees from international legal protection and assistance, a policy that did not accord with “Christian principles.” But so far as the Allies were concerned, the expellees were Germany’s problem.

Knowing the dramatic circumstances of their enforced expulsion did not make local Germans any more sympathetic to the newcomers.

German expellees became highly important figures in postwar social life and politics in the Western and Eastern zones of occupation. What they found in their new destinations, and how they coped with this abrupt change in their lives, requires us to consider not one Germany, but two, although both states, however great their political differences, confronted immense challenges in integrating expellees, who reached Germany with little advance notice.

The West German government laid down the legal framework and underwrote the costs of resettlement. The legal position was determined by the Basic Law of 1949, Article 116, which gave German citizenship to descendants of people living in Germany as of December 1937.

Citizenship was one thing; securing an adequate livelihood was another matter altogether. There was a significant regional dimension to this forced migration. Expellees were expected to move to rural areas, where the housing stock had suffered relatively less damage than in urban centers. Most expellees ended up in Bavaria (in the American occupation zone) and in Lower Saxony, North Rhine–Westphalia, and Schleswig-Holstein (all in the British zone). In Bavaria they made up more than 20 percent of the total population, and in Lower Saxony expellees and newly arrived refugees made up more than 27 percent of the population.

The Allied occupation authorities attempted to ease the problem by insisting that private homeowners give up rooms to accommodate the newcomers, with penalties for noncompliance, although these were difficult to enforce. Some expellees found temporary accommodation in disused air-raid shelters; others were sent to hotels. Local government officials frowned upon extended stays in camps, lest this create a new category of humanity, Homo barackensis, a breeding ground of despair and radicalism.

But it was not easy to dismantle camps, which held some attraction for those unable to afford the rent on an apartment. In any case, camps were needed for refugees from East Germany, who continued to arrive throughout the 1950s. Camps remained for years a feature of the German landscape.

Expellees struggled to find jobs. Those with a professional or clerical background had to set their sights lower or risk unemployment. Some Sudeten Germans with skills in various trades and services managed to set up in business on their own account, particularly if they were bakers, butchers, or hairdressers, for example, or if they could work as bricklayers, carpenters, or electricians. Cottage industry made a comeback, as in the new town of Neugablonz in Bavaria, where glass and jewelry makers were rehoused from Gablonz (now Jablonec) in Czechoslovakia. Other expellees commuted from villages into nearby towns and cities in search of work. But no one could do much more than just scrape by, and life was particularly tough for those who could not find work and for the elderly and disabled.

With the Allies having rapidly washed their hands of any further responsibility towards German expellees in the West, nongovernmental organizations (NGOs), including church groups and charities, worked to plug the gap. Food shortages meant that expellees bartered what few belongings they had in order to obtain food, or else simply appealed to local parishioners to take pity on them and spare some scraps. Finally, local authorities stepped in to insist that local parishes provide allotments.

In 1949, the Lutheran World Federation established more permanent settlements, such as at Espelkamp in North Rhine-Westphalia, in order to provide “a bulwark against communism” and a place for “Christian reconstruction.” Homes for expellees came with strings attached, however: only those with a guaranteed job were assured of a place to live. The emphasis was on self-help.

Knowing the dramatic circumstances of their enforced expulsion did not make local Germans any more sympathetic to the newcomers. Sympathy soon gave way to suspicion and outright contempt, particularly in rural areas or small towns that had escaped relatively unscathed from the war and where expellees were more conspicuous (bigger cities generally offered a warmer welcome). Farmers complained that expellees were lazy and arrogant—farmers from the East, they maintained, had employed Poles to do the hard work on their farms—and sometimes even claimed they were dishonest.

One Schleswig-Holstein farmer reported: “The children steal so much fruit that I might as well cut down the trees.” As it became clear that the expellees were there to stay, villagers began to speak of them as a “Slav element,” or, in one particularly odious formulation, “mulattoes.” These characterizations were a racialized depiction of the expellees, as if their “German blood” had been tainted by long years living in Eastern Europe.

Much later, the historian Rainer Schulze interviewed middle-aged expellees who settled in Celle, a rural district in northwestern Germany. He found that they had to adjust to a sense of estrangement. Herr O., who arrived as a seven-year-old expellee in 1945, became a champion marksman but relinquished his status in order that locals would not resent him.

Expellees described being isolated, a direct consequence of the Allies’ decision to disperse them: families might be allowed to stay together, but communities were deliberately dismantled, lest they form “a state within a state” and support revanchist claims, or, in other words, campaign for a reversal of the postwar territorial settlement. There was more than an element of truth in this concern: to begin with, at least, many expellees felt that any attempt on their part to “integrate” into West German society was tantamount to accepting the fait accompliof postwar borders.

The Basic Law provided expellees with the opportunity to create formal associations, known as Landsmannschaften, or “homeland societies.” By 1955 there were 20 of these with a total membership of more than 1.3 million. They provided a degree of mutual aid but also served as a focal point for annual political rallies, in which they demanded to be allowed to reclaim the land from which they had been expelled.

A major political pressure group appeared on the scene in the shape of the Bund der Heimatvertriebenen und Entrechteten (BHE, League of Expellees and Those Deprived of Rights) in 1950, renamed the Bund der vertriebenen Deutschen (BvD, League of Expelled Germans) in 1954, whose leaders pressed for the recovery of territory from Germany’s eastern neighbors and a return to the 1937 borders—but excluded the Sudeten Germans.

West German politicians responded in more temperate fashion. The Charter of the German Expellees, adopted by the West German government in August 1950, rejected “all thought of revenge and retaliation,” pinning its hopes instead on European unity “as the only permanent solution to the continent’s minority problems.” 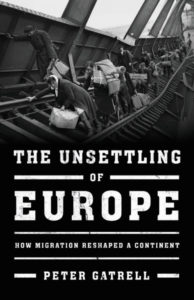 Adapted excerpt from The Unsettling of Europe: How Migration Reshaped a Continent by Peter Gatrell. Copyright © 2019. Available from Basic Books, an imprint of Perseus Books, a division of PBG Publishing, LLC, a subsidiary of Hachette Book Group, Inc.

Peter Gatrell is a renowned historian of modern migration and a professor of economic history at the University of Manchester. He is the author of six previous books on migration history and modern European history. He lives in Manchester, England. 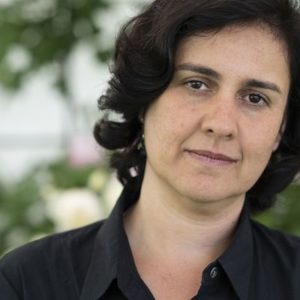