Adelia Saunders Reads Between the Lines in Post-Soviet Latvia

When I was 17, I left the cacophony of high school for a particular kind of silence. I went as an exchange student to Latvia (not my first choice; France was full) and was placed with a family in Liepāja, an industrial city on the Baltic Sea. My host parents didn’t speak any English, except for “chicken soup!” which my host mother announced, radiantly, whenever she made it. She was a second-grade teacher and taught me Latvian, mostly in the kitchen, by speaking very slowly: Kartupelis, potato. Ledusskapis, refrigerator. Šķiņķis, ham—that was a tough one. In the months I spent surrounded by words but unable to fully communicate, something happened that I hadn’t expected: I learned to listen to language. I received words one by one, like children do, and I found they always came with stories.

Latvian is related to no other modern language, except Lithuanian. It has long vowels and difficult tongue-tucks. Prefixes are added to the front of words to give subtle shades of meaning, which makes it difficult to look things up in a dictionary. But I discovered that if I made lists of vocabulary before I went to bed, the words would be in my head the next morning. I made up odd mnemonic devices. The Latvian word for destiny is liktenis; I will never speak of the unknown future, in any language, without thinking about licking a tennis ball.

Some words were history lessons. My host family lived in one of the hundreds of cement apartment buildings that people called Hruščovkas, “Khrushchevs,” after Nikita, who built them all across the Soviet Union regardless of local conditions—the result of which, I was told, was that families in apartments identical to ours sweated in Baku and froze in Tomsk. In Liepāja, sea winds sometimes blew our windows open at night, and more than once I woke to my host mother in her nightgown, slamming down the sash as my room filled with snow. The name of the Soviet premier had accumulated other meanings too—the flowering weeds that towered over native foliage were also “Khrushchevs”; they had been brought to Latvia in the 1960s to nourish Soviet cows.

I learned right away not to use the Russian words I had studied back home in preparation for life in a former Soviet republic. My host parents knew Russian, but they refused to speak it on principle. Like most Latvians, they had relatives who had been sent by the Soviets to die in Siberia; my host father, so the story went, had gone to jail for singing the forbidden Latvian national anthem. Instead of going to art school he was conscripted into the army and stationed near the Arctic Circle. What did he do there? Ha! he said, grinning, making missile sounds: he manned warheads pointed at America.

While language was still a battleground for the older generation, I saw how a divided society can begin to knit itself together though its young people. In Liepāja there were separate schools for Latvians and Russians, and while none of the Latvian kids I knew had Russian friends, exactly, one day one of my fellow exchange students—a vegan from Finland whose parents were communists—brought her Russian-speaking friend to our after-school drama class. The Russian girl couldn’t speak Latvian, but when it was her turn to do a scene the Latvian boy playing opposite her did an on-the-spot translation of his script into Russian, feeding her each of her lines, and then saying his lines in Russian too. This was no small task for a teenage boy in drama class, especially considering we were doing Shakespeare and they were reading the balcony scene from Romeo and Juliet. It’s the scene where the problem of being on opposite sides of an ancient quarrel is discussed: ‘Tis but thy name that is my enemy, and so on, the Latvian boy translating and the Russian girl repeating, both of them blushing and completely unable to look at each other.

I doubt they were given the scene by accident. Our drama class was run by the most romantic of characters, a highly trained actor of a national theater in a minor European country: his salary pittance, his figure lumpy, his voice terrific, his hair thinning. His career absolutely limited by the obscurity of his native language, but his Hamlet—or Vanya, or Trigorin—will likely be the best you ever see, even if you can’t understand a word of it. He dressed mostly in black, and at the end of each class we paid him in coins.

All that winter my host mother gave me Russian vitamins, rubbed something on my skin that gave me a mild chemical burn, and watched to make sure I swallowed spoonfuls of the garlic and honey mixture she kept in a jar under the sink. But still I was always sick. From this, my host family determined that Americans are basically weak. But when I told them that in my town in Colorado we have lāči—bears—and that kids learn in school which kind of lāči you run from and which kind you’d better not run from, then my host family was impressed. Bears are big in Latvia. The most famous work of Latvian literature, Lāčplēsis, is the story of a hero who kills a bear. There is a national holiday celebrating this bear-killer. My host father particularly loved bears. But those days are gone, he told me. Now Latvia has only one bear, and has to share it with Estonia.

Lāčplēsis, it is said, would rival Hamlet, if only anyone outside of Latvia could read it. Latvia’s literary tradition is rich; I was told that there is more poetry written in Latvian than in any other language. And while this is difficult to substantiate, it is true that if you go into a bookstore in Latvia, it is books of poetry rather than novels or historical biographies or self-help books that fill the display tables and the most prominent shelves. At Christmastime, children must recite a line of poetry before receiving each gift, and in 1989, as the Soviet Union crumbled, Latvians, Lithuanians, and Estonians joined hands in a human chain that stretched across all three Baltic states, singing the cycle of nationalistic folk songs whose lyrics everyone recognized as an expression of post-Soviet identity.

As time went on and I learned more Latvian, I also learned about things that went unspoken. I had listened to my host parents’ accounts of persecution by the Soviets and deciphered the brief chapter on World War II in my history textbook. But I knew almost nothing about Latvia’s Jewish history until I wandered into a municipal graveyard one day on my way home from school. It was a place I’d passed dozens of times, and I’d often seen people inside, watering flowers and sweeping between the gravestones of their relatives. Latvians take care of their cemeteries; I had gone with my host parents to visit their family plot in a village in the country, and we had done the same thing, sweeping and covering the graves with fresh evergreen branches.

Most of this cemetery was as neatly kept as any other. But one corner had gone wild. Whole trees were growing out of cracked monuments covered with decades of leaves. I noticed there were no Latvian words on these graves. The inscriptions were in Cyrillic or Hebrew letters, and there was no date of death later than 1941. I knew that Latvia had been on the German side in World War II (“Better them than the Soviets,” both my host mother and my history textbook explained), and I assumed that Latvia must have a history of anti-Semitism, because polite Latvians won’t even say the word Jew. Rather than žids, the word given in my dictionary, my host mother made sure I knew that Jews should be called ebrejus, “Hebrews,” which struck me as an odd distinction. In any case, I didn’t have much occasion to use either word; as far as I could tell, nobody in Latvia was Jewish.

But in the graveyard in Liepāja, facts I would later find in history books presented themselves as broken stones and layers of leaves. I could see by the size of the monuments—they were large, made of smooth black rock so different from the small markers on the Latvian graves—that our town had once had a prosperous Jewish community, whose members spoke their own language and buried their dead under ornate headstones. It was a story I could read without understanding the writing on the graves: The cracks had been made, not by time, but by other people, and vines grew over them because there was no one left to cut them back. I thought of my host mother, and I realized that she’d been telling me the same story, in a way, when she’d said there was a word in my dictionary that shouldn’t be used anymore.

In the months I spent in Latvia I came to know another country as an outsider. I saw its troubled history of overlapping persecutions and aggressions and exclusions, and I experienced firsthand the warmth and humor of its people. Looking back, it’s only now I realize that what I also got was an education in human expression that went well beyond my nightly vocabulary lists. I learned that language is a political thing, that the fact of speaking one language instead of another can make daily discourse an expression of independence—or turn an act of kindness in drama class into a chance to uncross the stars. I learned that nations never really get rid of their stories, that people will always stitch bits of history into the languages they are given and let words carry the past.

Adelia Saunders has a master's degree in international relations from Georgetown University and a bachelor's degree from NYU’s Tisch School of the Arts. She has taught English in Paris, written for an independent newswire at the United Nations, and assisted an agricultural economist in Uganda. She grew up in Durango, Colorado, and lives with her husband and two children in New York City. INDELIBLE is her first novel. 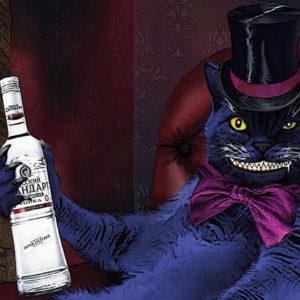 Before his death at a Siberian transit camp in 1938, Osip Mandelstam famously uttered, “Only in Russia is poetry respected—it...
© LitHub
Back to top