It’s exactly noon when I hear people screaming desperately behind me. Donald Trump has just been sworn in as the 45th president of the United States. “We are transferring power from Washington, D.C. and giving it back to you—the people,” he says. He’s a thousand feet away. I’m in the “Blue” standing-room section. With thousands of others I’m cordoned off in a tight, claustrophobic enclosure—separated from the main area. There’s hardly enough space to stand. And now the crowd at my back is jostling. Struggling. Shouting. “Get it out!” I hear. “Somebody do something!”

I turn around. A few feet away, a man in his thirties—one of the only people of color at the Inauguration I’ve seen so far—is smoking an enormous joint of marijuana.

“Get the police!” someone screams. Someone else—wearing a gilded MAKE AMERICA GREAT AGAIN hat—reaches for the man’s hand, but the marijuana smoker is very tall, and he exhales calmly, holding the joint high above his head.

Suddenly an older woman in a red dress jabs her finger in my face. “Are you with him?” She asks. And then, gesturing to those around her: “Him too, him too!”

For the entire morning this has not been a happy crowd. In the standing-room area of the Inauguration, it’s basically a free-for-all. Much later I’ll find out that there’s already been a violent incident in the Blue section—at 9am the burgeoning crowd pushed the barriers completely down, the police intervening—and the official response has been to narrow the existing space we’re all corralled within: a tightened corridor.

I arrived around 10:30am. Already the Inauguration audience has booed Jimmy Carter. And the Clintons. And senator Chuck Schumer. Even George W. Bush. They’ve chanted Build That Wall and Lock Her Up! They’re wearing LSU hats and ponchos and sweatshirts that say: THERE ARE THOSE BLESSED WITH THE GIFT OF AGGRESSION. And now, instead of listening to the speech by Donald Trump that they’ve waited hours to hear, they’re screaming about the man smoking a fat, steaming jeezy in front of them all—a person they keep calling “The African.”

The woman in the red dress is still shouting at me.

“I won’t have it here!” she screams. “I won’t have it!” She refuses to give me her name. But the man who happens to be next to her—he’s been glaring at me the entire time, gray-jawed and unblinking—suddenly says, “I’ll tell you why the people are so angry.” The tone of his voice lacks all affect. Behind us, the strange vortex of shouting and pushing continues. From the audio system, Trump is talking about carnage and blood. “When you open your minds to patriotism,” he says, “there is no room for prejudice.”

I can’t follow the speech. Instead, I’m listening to this man with the dark jaw, the one who’s been staring at me—his name is Allen Whitt, he’s from West Virginia, and he’s the president of something called The Family Policy Council—as he explains, slowly and carefully, exactly why everyone here is so angry:

“It’s because people’s voices have been challenged,” he tells me.

Eyeing my notebook, he adds: “It’s because of people like you.” And as the crowd cheers and the man with the joint disappears in their midst, Mr. Whitt explains that, in his opinion, the liberal media is the real cause of the anger I’ve witnessed all morning. “You are biased,” he says.

Now I’m eyeing the space around me for an escape path. It’s not that I haven’t heard this before. Still: I suddenly feel desperate. So I interrupt Mr. Whitt with the question I’ve been asking everyone I’ve met over the past few days—a non sequitur that always elicits a significant response: “What’s your favorite passage from the New Testament gospels?”

The woman who’s accused me of being in league with the marijuana guy jumps in: “Acts: 33!” she shouts. “Do you know it?”

For a moment we’re speechless. All around us, Trump’s words blare from the loudspeakers: “The forgotten men and women of our country will be forgotten no longer!”

The woman in the red dress shouts: “Everything Jesus said is my favorite!”

Me: “The Prodigal Son. To be specific, Luke: ‘My son was dead and is alive again. He was lost and he is found!’”

Mr. Whitt nods slightly. “Mine is from John,” he finally says.

“Is it Lazarus?” I blurt. And then, inappropriately, I add: “I’d like to change my initial response. I think my favorite is actually Lazarus. So good!”

“My favorite,” Mr. Whitt says slowly, “is the story of the vine and the branches.”

I nod; I’m pretending I know the reference. But the truth is I’ve forgotten that one. To be clear: I’m an atheist through and through, but I grew up Catholic, and I’ve got a bit of a scholarly background in the academic study of the historical Jesus (in terms of social justice, at least) and the overall point is that, many hours after this conversation I’m having now—much later in the afternoon—I’ll finally look up Mr. Whitt’s favorite passage, and I’ll be absolutely shocked by its inherent violence:

John 15:5: I am the vine; you are the branches. If you remain in me and I in you, you will bear much fruit; apart from me you can do nothing. If you do not remain in me, you are like a branch that is thrown away and withers; such branches are picked up, thrown into the fire and burned.

“Everyone who drinks this water will be thirsty again, but whoever drinks the water I give them will never thirst.” John 4:13

“But Jesus bent down and started to write on the ground with his finger. When they kept on questioning him, he straightened up and said to them, ‘Let any one of you who is without sin be the first to throw a stone at her.’” John 8:7

The night before the Inauguration, I attended the concert at the Lincoln Memorial—a free event headlined by Toby Keith and Lee Greenwood—and the mood was the complete opposite from what I would experience at the Capitol.

The concert started at 4pm. And as I strolled in the evening dusk—walking west—I found myself talking a pair of women who were in their fifties. This was near a bank of portable toilets. The first was Grace Anne of Arizona: she had a homemade cane and wore a US Armed Services hat; “I just want a job!” she told me. The second was Bonnie Doyle of Chandler, Texas. She’d recently had surgery on her right rotator cuff and was planning to repeat the procedure on her left. Together, they’d been with the Trump campaign since the beginning—Grace Anne all the way back to 2012, she told me—and they were here, in Washington, D.C., despite everything, to celebrate an outcome they’d never once doubted.

On election night—the night he was elected—I had this little pin on my hat [pin that spells out TRUMP]. It disappeared. We were looking all over for it. They were all saying it’d be till morning till we knew the winner. So I got in my car. And I’m in the front seat. And we had all looked through the car, for the pin, looked all over the place for it, and we couldn’t find it. We were halfway back to my apartment—this is true—when, in the dashboard, by my knee, I found it—THE TRUMP PIN! And listen: it was not there when I got in. And I knew right then and there that he had the election in the bag. Sure enough: five minutes after we got back to the apartment, they announced it: he won!

Later, when I was leaving this concert—after talking for a long time to many people with whom I shared very little in common—I came across a portable structure: The Tent of Perpetual Adoration. Inside, a never-ending song was being performed: three people on stage were singing Bible verses and strumming crude instruments.

I sat in the back of this tent. It was warm and comforting—a pocket of heat within the rapidly cooling night. Eventually, a woman of about fifty—her name was Terry Whiting, from Portland, Oregon—sat down next to me.

All night I’d been trying to listen; to not talk over Trump supporters; to hope, in a way that felt absolutely impossible, to understand their perspectives: their stakes; to earn my eventual dismissal of them…

“I was reborn at 34,” Ms. Whiting told me. “I was originally Catholic. I fell on hard times. But every single day that has gone by, since, I have experienced the living Jesus. My life has been better. It is a matter of acceptance. The community has saved me.”

In response, I told her (to quote a favorite writer of mine: Julian Barnes): I don’t believe in God but I miss him. She hummed slightly. She said that Trump was holy. That the future was a promise. That everything is known. And she asked me, right then, what I’d like to pray for.

America, I thought. But that’s much too easy. And besides: I hadn’t prayed in years. In the next moment—out of a sense of respect I still don’t quite understand—I asked Ms. Whiting to keep in mind a family member of mine who’d recently suffered terrible health complications.

What can I say? I felt genuinely grateful. I was at this concert for Donald John Trump to amass evidence against his continuing injustice—and against the many people who have supported him: a man who I personally feel is a genuine and existential threat to our future.

But Ms. Whiting’s comments stung me. I left the tent feeling, in a word, elated. It wasn’t as if I suddenly believed in God or anything like that. Instead, let me say this: I was genuinely surprised.

At the end of the Inauguration, in the Blue section of the standing-room-only-crowd where I’d camped out—as Donald Trump ended his speech with the intonation: “America will start winning again, winning like never before!”—a man behind me began to scream.

He was very angry at a specific person—someone who, positioned against the fence a few feet ahead of us, in a wheelchair, appeared to be blocking his line of sight.

“There’s nothing wrong with you!” he yelled.

And: “Are you crippled or selfish? I can’t see!”

And: “You’re hijacking my view!”

At that instant, I thought about how Americans, at their core, seem to want most of all to be always heard—to be seen. I thought about how essentially human it is to wish for a podium similar to that upon which Donald Trump was standing, only a few thousand feet away, above us all. I reminded myself that justice—social, historical, personal—is not a value to be taken for granted; our past is always one of forgetfulness. And violence. And loss. Finally: I asked this man screaming at the person in the wheelchair if he would please give me his name.

“Don’t tell him,” someone on his right said.

But this man kept watching me. He was wearing a red scarf. He was grinning. His cheeks were strafed with inflammation. “I’m 57 years old,” he said. “I’m from Florida. I stand by what I’ve said. But listen: I won’t tell you who I am.” 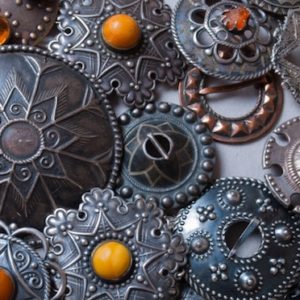 When I was 17, I left the cacophony of high school for a particular kind of silence. I went as an exchange student to Latvia...
© LitHub
Back to top