Lyndsie Bourgon on the Theft of Our Deepest Connection to History

The first case of tree theft I ever encountered occurred within the stands of ancient old-growth on the southwest shores of Vancouver Island, in Ditidaht territory.

One day in the spring of 2011, a hiker in British Columbia’s Carmanah Walbran Provincial Park noticed the smell of fresh sawdust in the air, and as he walked he spotted felling wedges—tools used to guide a tree’s fall in a particular direction—thrust into the body of an 800-year-old red cedar. With the right wind, the tree, rising about 160 feet tall, could easily tip over. The wedges had shifted the tree from towering sentinel in lush rainforest to teetering public danger. BC Parks rangers were forced to down the cedar themselves. They left the tree on the forest floor to decompose, recycling back into the earth over the next hundred years.

It wouldn’t last anywhere near that long: just 12 months later, most of the trunk was gone. After the tree was felled, poachers entered the park and sawed the trunk (or “bucked” it) into portable pieces, leaving a trail of sawdust and abandoned equipment behind. Ironically, by honoring their mandate of safety and conservation, BC Parks had made it easier for the tree to be stolen.

A local environmental group, the Wilderness Committee, sounded a public alarm about the poaching, and a press release sent out to journalists landed in my in-box. A decade later, no one has been charged under British Columbia’s Forest and Range Practices Act with the crimes that took place in the Carmanah Walbran that night: unauthorized timber harvest from public property, and vandalizing timber. The cedar is long gone—sold to a local sawmill in the dead of night, or to an artisan who kept it in their shop, or turned it into shingles, or a clock, or a table.

Since then, I have watched a spate of wood poaching sweep North America: in the Pacific Northwest, the lush forests of Alaska, and the timber stands of the eastern and southern United States. Timber poaching happens everywhere, on vastly different scales, throughout the seasons—one tree taken here, another there. It has become “a problem in every national forest,” according to forest officials, and it runs the gamut from the seemingly minute—cutting down a small Christmas tree in a park near your city, for example—to the large-scale devastation of entire groves.

In North America, the scale of timber poaching varies by region: In eastern Missouri, timber theft has become a frequent problem in Mark Twain National Forest, where in 2021 a man was charged with cutting down 27 walnut and white oak trees inside the park over the course of six months, then selling them to local mills. In New England, the primary victims are cherry trees. In Kentucky, the bark is stripped off the slippery elm tree for use in herbal remedies and diet supplements.

Bonsai have disappeared from a museum garden in Seattle, palm trees from Los Angeles yards, a rare pine from an arboretum in Wisconsin, ancient alligator junipers from Prescott National Forest in Arizona. In Hawaii, koa trees—prized for their fine-grained red wood—are stolen from the rain forest. In Ohio, Nebraska, Indiana, and Tennessee, I found the stumps of black walnut and white oak. None of these trees were rooted in logging land—all had been afforded some measure of protection, meaning they mattered to someone and some place.

Deep in the woods, there is other natural theft, too. Moss is sold to florists for about $1 per pound; in one case a poacher was caught with 3,000 pounds in the bed of his pickup truck. Across the southeastern United States, poachers rake up and sell the needles from longleaf pine, a resource dubbed “brown gold.” Boughs off tree limbs, mushrooms, grasses, ferns—all are illegally traded forest products. Sometimes the very tops of spruce or fir trees are lopped off and sold as Christmas trees, or the tips of branches removed and turned into potpourri.

Forests are managed on stratified bureaucratic levels that, at points, overlap and collaborate. There are private property owners and forests managed by logging firms. There are also regional forests that fall under the jurisdiction of municipalities, states, or provinces. Then there’s the National Park Service, the Forest Service, the National Monuments; in Canada there are Crown lands, national parks, and nature reserves. In the United States, most forests are privately owned and managed as forests or timber land. But in the western half of the country, most forest land is held by the federal and state governments—70 percent of the forests there are publicly owned, compared with just 17 percent in the East.

Timber poaching is legally classified as a property crime, but it’s unique in its bounty and setting. Poachers prefer the term take to poach when it comes to trees, and it is indeed that: a taking of an irreplaceable resource.

It’s easiest to understand these protective layers by considering the larger entity each organization falls under. For instance, the Forest Service is nestled within the Department of Agriculture. As such, the trees on Forest Service land are managed like a crop—a product that is grown and harvested and consumed. Other American agencies (the National Park Service, the Bureau of Land Management, the US Fish & Wildlife Service) fall under the Department of the Interior. But even beneath that umbrella, things get complicated—for instance, selective logging does take place on National Park and BLM lands.

The US Fish & Wildlife Service protects fish, wildlife, and their natural habitats—but those fish might pass through a national park or national forest via a stream, their migration blurring the boundaries of responsibility. The poaching from these conservation areas is the most shocking—trees meant to be protected through their entire life cycle and beyond brought down, a stark example of the ways in which conservation can fail.

In North America, it’s estimated that $1 billion worth of wood is poached yearly. The Forest Service has pegged the value of poached wood from its land at $100 million annually; in recent years, the agency estimates, 1 in 10 trees felled on public lands in the United States were harvested illegally. Associations of private timber companies gauge the value of wood stolen from them at around $350 million annually. In British Columbia, experts put the cost of timber theft from publicly managed forests at $20 million a year.

Globally, the black market for timber is estimated at $157 billion, a figure that includes the market value of the wood, unpaid taxes, and lost revenues. Along with illegal fishing and the black-market animal trade, timber poaching contributes to a $1 trillion illegal wildlife-trade industry that is monitored by international crime organizations such as Interpol.

Timber poaching is legally classified as a property crime, but it’s unique in its bounty and setting. Poachers prefer the term take to poach when it comes to trees, and it is indeed that: a taking of an irreplaceable resource. In North America, trees are our deepest connection to history, our versions of cathedrals and standing ruins. When they are poached, though, they become stolen goods, and are investigated as such. But it is one thing to link a stolen car back to its owner via paperwork or plates, and another to link poached wood to the stump it once stood on. In lush forests, those stumps are usually hidden behind a curtain of trees, or covered in moss, or buried in branches—in all cases next to impossible to find.

Placing a value on poached wood is likewise complicated: the effects of timber poaching quickly become more nuanced, complex, and devastating than property crime when considered ecologically. Public lands enclose some of the oldest remaining trees in the world. Their ability to store large amounts of carbon—the redwoods alone hold more carbon per acre than any other forest in the world, and British Columbia’s Carmanah Walbran Provincial Park contains twice the biomass of lush, Southern Hemisphere tropical forests that are widely considered the Earth’s lungs—make old-growth trees a key species in our fight against climate change.

As well, when old-growth disappears, the foundation from which it grew is destabilized, leaving landscapes more prone to flooding and landslides. Even if dead-standing (termed snag in the logging industry), old-growth provides an incomparable ecosystem for endangered species across the continent. When the trees disappear, so too do the animals, birds, and smaller flora and fungi that rely on them. Tree poaching, even on a small scale, has a far-reaching impact, contributing to a decline in environmental health and weakening our forests, leaving marks on the Earth that will persist for hundreds of years.

In the world of conservation-law enforcement, though, an invisible line seems to divide flora and fauna. Arguing (and fundraising) to protect animals, especially “charismatic megafauna” such as elephants and rhinos, from poaching and illegal trade tends to be easier than advocating to guard plants. But of the 38,000 species protected by the Convention on International Trade in Endangered Species of Wild Flora and Fauna (CITES)—the global registry of plants and animals that are exploited or endangered through trade—over 32,000 are flora.

The very nature of old-growth provides an opportunity to transcend that invisible line: in Redwood National and State Parks in California, chief ranger Stephen Troy says, the trees are “the rhino horn of the American West.” The same can be said of cedar and Douglas fir ecosystems, their branches dripping with spools of moss and their trunks towering into the sky. These are trees that invoke awe, through height and age and circumference. It is very difficult to stand in a grove of Sequoia and not be bowled over by their beauty. 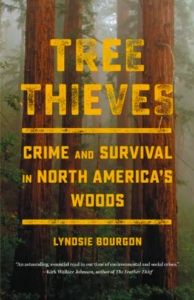 Lyndsie Bourgon is a writer, oral historian, and 2018 National Geographic Explorer based in British Columbia. She writes about the environment and its entanglement with history, culture, and identity. Her features have been published in The Atlantic, Smithsonian, the Guardian, the Oxford American, Aeon, The Walrus, and Hazlitt, among other outlets.

The Oddest of Organs: A Brief History of the Tongue 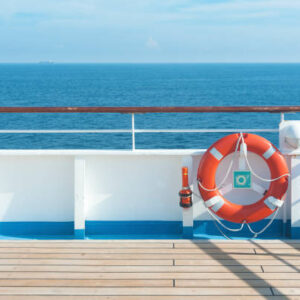 MARCH 17, 11: 32 A.M. Sarmiento Channel, off Puerto Natales, Chile Claudia Osiani was shocked at the scene playing out before...
© LitHub
Back to top
Loading Comments...