The Patron Saints of Pessimism: A Writer’s Pantheon

If all is for naught, then why bother writing it down? Caught in a vicious circle, ensnared in the logical absurdities of awkward self-awareness. It seems there are one of two options: either speak to this situation, or remain silent. The writer’s failure is that they know they should choose the latter, but cannot help attempting the former. Writers (and readers . . . when there are readers . . . ) console themselves by naming this failure: an apology, a confession, a testimony, a treatise, a history, a biography, a life. But the continual accumulation of that-which-cannot-be-put-into-words always points back to this one basic realization—that, when it comes to human beings, silence is the most adequate form of expression. There are, then, two paths. Ultimately writers dream of taking neither path, leaving all paths for the forest. But it’s just a dream.

The patron saints of pessimism watch over our suffering. Laconic and sullen, they never seem to do a good job at protecting, interceding, or advocating for those who suffer. Perhaps they need us more than we need them. There are patron saints of philosophy, but their stories are not happy ones.

Even in cases where the entire corpus of an author is pessimistic, the project always seems incomplete, as if there was still one more thing to say, one last indictment . . . from Goethe’s sorrowful Werther, to Dostoevsky’s burrowing creature, to Pessoa’s disquiet scribbler; Baudelaire’s spleen and ennui; the mystical pessimism of Huysmans and Strindberg; the stark and unhuman lyricism of Meng Jiao, Georg Trakl, Xavier Villarrutia; the frenetic obfuscations of Sakutaro Hagiwara, Ladislav Klíma, Fyodor Sologub; the haunted and scintillating prose of Mário de Sá-Carneiro, Izumi Kyōka, Clarice Lispector; the misanthropic rigor of Lautréamont’s Maldoror or of Bonaventura’s Nightwatches; the crumbling of reason in Artaud’s The Umbilicus of Limbo or Unica Zürn’s The House of Illnesses. Grumpy old Beckett.

Cioran’s fragments are themselves so fragmented, so shattered (and shattering), that they sometimes seem less than a fragment: more a particle, a speck of dust, the debris of thought.

Cioran published De l’inconvénient d’être né (translated as The Trouble with Being Born) in 1973. It was a time of loss and refusals. A few years before, Cioran’s mother and sister had died. Cioran’s close friend, the playwright Arthur Adamov, committed suicide. The year also saw the death of another close friend, the existentialist philosopher Gabriel Marcel. A year later, the poet Paul Celan, who had translated Cioran’s work into German, also committed suicide. It was a period of refusals. Cioran proudly spurned several gestures of monetary support, as well as numerous literary prizes, many of them ﬁnancially signiﬁcant (there is an anecdote of Beckett  lending Cioran money while chiding him for refusing such prizes). All the while Cioran continued to live modestly in his rented apartment, working at his compact and cluttered desk, writing in his multi-colored notebooks, taking his frequent walks. In The Trouble with Being Born Cioran grapples with an age-old philosophical dilemma—the problem with being here, in this moment, thrown into an existence that one has neither asked for nor desired, in a world that we have diﬃculty whole-heartedly accepting or rejecting.

On the evening of the ﬁrst of April, 1876, 34-year-old Philipp Batz gathered together copies of his book Die Philosophie der Erlösung (The Philosophy of Redemption), which had just arrived from the publisher. He had worked in the ﬁnance and banking sectors for nearly a decade, before quitting his job in disgust. He had been discharged from his military service due to exhaustion and fatigue. He had written several poems and literary works which remained unpublished. And, from the time he was a teenager, he had enthusiastically read Schopenhauer, in addition to Leopardi, Dante, and Heraclitus. In his Offenbach apartment, Batz gathered together the copies of his 900-page book, but with how much premeditation it is impossible to know. The book, published under the pen name of Philipp Mainländer, talks of a pervasive “Will-to-Die” that indiffferently drives everything that exists, to exist—to exist in order to be extinguished. Batz arranged the copies of his book on the ﬂ oor into a single pile. He stepped up on top of his books, and hung himself from the ceiling beam of the room.

At the core of Mainländer’s philosophy is the idea that everything that exists, exists in order to not exist—not for some imagined and fantastical afterlife, and not in order to re-enter the cycle of birth, suffering, and death, but for pure annihilation—a “mortiﬁcation of energy.” Everything that exists, driven by a blind “Will-to-Death,” exists only to achieve its own nulliﬁcation. Mainländer calls this “redemption.”

Aristocrat, statesman, businessman, diplomat, humanist, socialite, melancholic, tourist, bibliophile, translator, and essayist—Michel de Montaigne was by all standards a worldly person. Born near the Bordeaux region to a wealthy merchant family, he had been reared according to the highest standards of humanist education. As a young man he served in the Bordeaux Parliament, and then at the court of Charles IX. As an adult Montaigne would also become a wine-grower, editor and translator, and would serve as Mayor of Bordeaux. As a statesman he was often pulled into the national negotiations surrounding the religious and political conﬂicts of his time. He travelled extensively across the continent, sometimes making spiritual pilgrimages, sometimes seeking convalescence for health problems, sometimes out of curiosity. It is perhaps strange, then, that, at the age of 38, Montaigne would decide to refuse the world. He shut himself in his library in order to write. So decisive is this refusal that Montaigne christens it with an inscription made on the wall of his library:

In the year of Christ 1571, at the age of 38, on the last day of February, anniversary of his birth, Michel de Montaigne, long weary of the servitude of the court and of public employments, while still entire, retired to the bosom of the learned Virgins, where in calm and freedom from all cares he will spend what little remains of his life now more than half run out. If the fates permit he will complete this abode, this sweet ancestral retreat; and he has consecrated it to his freedom, tranquility, and leisure.

What does he write? As any reader of his Essays can attest, Montaigne seems to have written about everything—over a hundred essays in three books, covering everything from the art of conversation to cannibalism, much of it written in the ﬁrst eight years spent in his retreat from the world. However, what is noteworthy among the pages and pages of observations is Montaigne’s often unfavorable view towards life—human life in particular. The diplomat so enamored of conversation now writes: “We are nothing but ceremony; ceremony carries us away, and we leave the substance of things; we hang on to the branches and abandon the trunk and body.”

It would seem that owning an estate and castle would be more than a suﬃcient means of shutting out the world. But the Château d e Montaigne was still too “worldly” for Montaigne. What is needed, as he notes, is an arrière-boutique, a kind of room-within-a-room, where one can recede from the governance of daily life: “We must reserve a back shop all our own, entirely free, in which to establish our real liberty and our principal retreat and solitude.” Montaigne himself decides to spend most of his time in “the Tower,” a small circular abode located at the southern tip of the castle. It is comprised of a central tower and an adjoining smaller tower that serves as a staircase.

It appears that Montaigne’s bibliophilia extended to the physical space of his library as well. On 46 of the 48 ceiling beams of the library Montaigne had inscribed almost 70 quotations in Latin or Greek, mostly from classical authors or the Bible. Among them one ﬁnds stark statements such as this, from Pliny the Elder: “Only one thing is certain—that nothing is certain. And nothing is more wretched or arrogant than man.” And then there are an abundance of lines from Greek Skeptics, foremost among them Sextus Empiricus: “I decide nothing.” “I understand nothing.” “It is possible, it is not possible.”

This peculiar form of graﬃti had a more practical purpose. Montaigne notes how he often paces around his library, occasionally glancing up at the beams for inspiration. His refuge is less a place of work, and more a space of wandering, in which the space of the library becomes the hollowed-out listlessness of the skull: “When at home, I turn aside a little more often to my library . . . There I leaf through now one book, now another, without order and without plan, by disconnected fragments. One moment I muse, another moment I set down or dictate, walking back and forth, these fancies of mine that you see here.”

Though he is commonly regarded as a philosopher, Nietzsche himself was not so sure. With its mania for constructing elaborate systems, philosophy was perhaps too well-formed for Nietzsche. Perhaps what he sought was a philosophy with less integrity. An oft-repeated aphorism reads: “I mistrust all systematizers and I avoid them. The will to a system is a lack of integrity.” And yet, Nietzsche continued to write, up until he could no longer—or would no longer—write. A fragment from Human, All Too Human lauds the “incomplete thought”:

Just as it is not only adulthood but youth and childhood too that possess value in themselves and not merely as bridges and thoroughfares, so incomplete thoughts also have their value. That is why one must not torment a poet with subtle exegesis but content oneself with the uncertainty of his horizon, as though the way to many thoughts still lay open. Let one stand on the threshold; let one wait as at the excavation of a treasure: it is as though a lucky ﬁnd of profound import were about to be made. The poet anticipates something of the joy of the thinker at the discovery of a vital idea and makes us desire it, so that we snatch at it; he, however, ﬂutters by past our heads, displaying the loveliest butterﬂy-wings—and yet he eludes us.

Paul Deussen, a friend during Nietzsche’s boarding school days at Pforta, and who would later, as a scholar, translate the Upanishads into German, once described Nietzsche’s dwelling in Sils-Maria in 1887 as a “cramped and dingy cave,” littered with “coffee cups, egg shells, manuscripts and toilet articles thrown together in confusion,” set off  against a perpetually unmade bed. 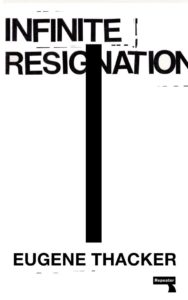 From Infinite Resignation. Used with permission of Repeater Books. Copyright © 2018 by Eugene Thacker.

Eugene Thacker is the author of several books, including Infinite Resignation (Repeater Books, 2018), In The Dust Of This Planet (Zero Books, 2011), and Cosmic Pessimism (Univocal, 2015). He teaches at The New School in New York City.

Neel Patel on Writing Past the Stereotypes of Indian Americans 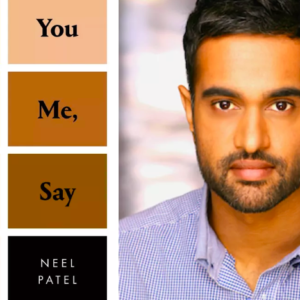 Neel Patel on Writing Past the Stereotypes of Indian Americans

Sometimes a book cover can feel like a promise. This is what I think the first time I hold Neel Patel’s If You See Me, Don’t...
© LitHub
Back to top
Loading Comments...