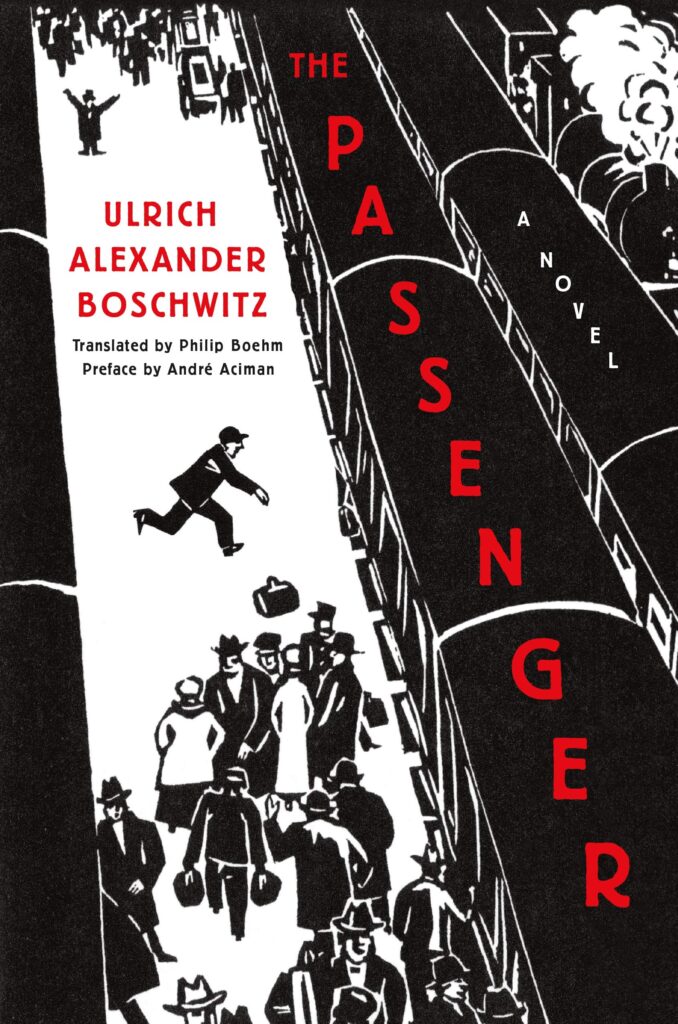 The following is excepted from Ulrich Alexander Boschwitz's novel, The Passenger, translated by Philip Boehm. Boschwitz was born in Berlin in 1915 and studied at the Sorbonne in Paris, where he wrote two novels. He settled in England in 1939 but was interned as a German "enemy alien" during World War II in Australia. In 1942, Boschwitz was allowed to return to England, but his ship was torpedoed by a German submarine and he was killed along with all 362 passengers. He was twenty-seven years old.

Silbermann hurried down the back stairs. They’re probably lying in wait for me, he thought. Ach, I should have stayed. What’s going to happen to Elfriede now? He wondered whether he shouldn’t go back. But Findler’s there, he reassured himself. A good thing that is, too. The man’s a decent person despite everything. If I’d stayed upstairs I’m sure I would have done something out of desperation. Resisted, or actually fired the gun, after all you have to do something, you can’t just let them do whatever they want to you. Not that it would have helped matters—on the contrary. Silbermann realized that if he had fired, it would have been out of fear. Fear, plain and simple. Fear of the concentration camp, fear of prison—and fear of being beaten.

Dignity, he thought, a person has his dignity and that’s something you can’t let anyone take away.

He stopped moving when he saw a man standing at the bottom of the stairwell, smoking a cigarette. Silbermann straightened up and approached the man with measured steps, calmly withstanding his gaze. As he came close, he asked the man for a light.

The man reached into his pocket, took out a pack of matches, lit one, and held it out to Silbermann.

“No idea,” Silbermann answered, amazed at how indifferent he sounded. “You should ask the doorman. I’m a stranger here myself.” He raised his arm and said, “Heil Hitler.”

The other man returned the greeting, and Silbermann walked past him without being stopped. Don’t turn around, he told himself. Don’t walk too fast or too slow. Because   if you stick out precisely when you’re trying so hard not  to, if you look suspicious because you’re trying to look as unsuspicious as you can . . . My God, what do these people want from me?

He had already left the hallway and crossed the courtyard. As he walked he reached up and felt his nose. How important you are, he thought. Now everything depends on what you look like, it’s up to you whether a person is a free man or a prisoner, you determine how a person lives, or even if a person stays alive. And if a person wasn’t lucky with how you happen to look, you just might get him killed. Outside the entrance to the apartment building he ran into another shady character. “Well,” he said in a forceful voice, instinctively imitating Theo Findler, “what are you hanging around here for?”

The man gave a start and automatically assumed what weak people consider a strong stance.

“Oh,” he said, in a way that was both chummy and respectful, “just a little Jew-hunt.”

“Ah,” said Silbermann, with apparent disinterest. Then he walked on, casually raising his arm in the official greeting. Once more he was not stopped. When he reached the street he paused for a moment to take everything in. What’s happening upstairs? he worried. If only I knew. Surely they won’t Yes they will. But Findler is there.

Suddenly he felt very afraid. The thugs could come down any minute and leave the building, or one of their lookouts might suddenly get suspicious and decide to stop him after all. So he again set off, quickening his pace.

It’s strange, he mused, as he crossed the street, thinking he’d be safer on the other side. Ten minutes ago it was my house that was at stake, my property. Now it’s my neck. Everything’s happening so quickly. They have declared war on me, on me personally. That’s what it is. War has just been declared on me once and for all and right now I’m completely on my own—in enemy territory.

Dignity, he thought, a person has his dignity and that’s something you can’t let anyone take away.

If only Becker were here. Hopefully the business won’t go to pieces. That’s all I need. I absolutely have to have that money in easy reach. Hopefully Becker isn’t gambling it away. Oh well, he’s the only one I can count on after all. And what if he does lose a few hundred marks at cards, what does that matter? More important things are at stake.

But I do need that money. Money means life, especially in wartime. A Jew in Germany without money is like an

unfed animal in a cage, something utterly hopeless.

He passed a phone booth, then turned around and went back. I’ll just make a call, he thought, and then I’ll know what’s going on.

The idea cheered him up, but the phone was occupied, and he had to wait awhile. The lady’s voice was too loud  to be contained by the booth, and Silbermann learned all about a fur coat that needed mending, about the film Love in the South, and about some man named Hans who had a sore throat.

Silbermann paced nervously up and down. Finally he tapped on the glass pane to signal he was waiting. The lady turned her face toward him, and that made such an impression that he granted her another five minutes’ conversation before deciding to give the glass another tap.

Finally the phone was free and he hastily dialed his apartment. No one answered. He tried twice more to connect, but without success.

Findler must be still dealing with them, he reassured himself, and hung up. Those boys are hard to get rid of. Calling was a dumb idea anyway, because as long as those people are there nobody can say anything to me. Silbermann then dialed his lawyer.

“It would be better if you called another time,” she interrupted. “There’s no telling when he’ll be back.”

“No doubt they’ve rounded him up, too,” he mumbled.

He dialed the number of a Jewish business friend, but no one answered there, either.

Silbermann grew more and more dismayed. Hilde was right, he concluded, all Jews have been arrested, and I may be the only one who’s escaped.

But I do need that money. Money means life, especially in wartime.

He rang up his sister.

They showed up at my ”

“I don’t want to hear about it, Otto.” She cut him off. “Our whole apartment is one big heap of ruins. I wish I’d been there when they came. As far as I’m concerned they could have taken me, too. Now I’m stuck here wondering what’s happened to Günther. A fifty-six-year-old man, fiftysix. And he can’t take getting upset like that. This is the end ”

“But surely they’ll let him go.” He tried to calm her down. “Can I help you somehow? Although I don’t particularly want to come over.” He heard a crackle on the line. “Good-bye,” he called out, startled. “I hope things go well with you, very well. I’ll be in touch.”

They’re tapping the lines, he thought. He quickly left the booth and looked around. The arresting officers will be here right away. Is it still even possible to telephone?

He climbed on one bus and rode to the Schlesischer Bahnhof, where he had to change for another. As he stood on the platform wedged between many other people, he noticed a young man and woman next to him pressed tightly together. He observed them closely, first examining the relaxed face of the girl and then that of the man.

Peace! he thought. They still have peace. Their small world is shielded by millions of lives just like theirs . . . and together they love and together they hate—and always in the majority. Although in the end it won’t do them much good, either.

He asked for a ticket, and after he had paid for it, he leafed through the bills in his pocketbook to see how much money he had on him.

One hundred eighty marks, he determined. Enough to leave the country—assuming that was possible. But even   if it was, he thought, he wouldn’t do it. He wanted to save his fortune. He wasn’t about to let that get snatched away so quickly.

If everything goes well, he thought optimistically, Becker will bring eighty thousand marks tomorrow. Then—he calculated further—I’ll get another ten thousand in cash for the house, and if I’m lucky I can sell the mortgage note with a discount. He smiled weakly. I’m still a pretty wealthy man, he concluded. And there are plenty of poor anti-Semites—if there still is such a thing as a genuinely poor anti-Semite— who despite everything would happily trade places with a rich Jew like me. There was something about the idea that cheered him up a bit. They really ought to take a poll to find out, he thought. But why should they trade anything at all? They’ll simply take my money and then they’ll be rich anti-Semites.

Peace! he thought. They still have peace.

The bus stopped, and Silbermann bought a newspaper from one of the vendors who were mobbing the exiting passengers. He frowned at the headlines: “The Murder in Paris.” “Jews Declare War on the German People.” Shocked and angered, he crumpled the paper and threw it away.

I was fully aware that war had been declared, he thought.

But that I’m the one declaring it is news to me. It all sounds like a bad joke, like “Robbers Severely Wounded in Attack by Cash Courier” or “Patient Robs Doctor to Pay His Fee.” As if the pike declared war on all carp and accused them of being accessories to attempted murder just because one he ate gave him a stomachache.

So a seventeen-year-old boy resists the suggestion he do away with himself and instead fires in the general direction of the source of such advice. And in so doing he, and therefore all of us, have attacked the German Reich.

Silbermann left the bus and pushed his way through the people thronging the streets until he reached the hotel where he had often stayed when he lived in a suburb that had no nighttime transport. To this day he always ate his midday meal there if he happened to be in the neighborhood.

He walked past the concierge, whom he’d known for years, and was annoyed at the unresponsive expression of the man, who had averted his eyes as soon as Silbermann had entered, undoubtedly to avoid having to greet him.

I remember a quite different welcome, Silbermann thought, and he felt a small, hollow twinge in his stomach.

The bus stopped, and Silbermann bought a newspaper from one of the vendors who were mobbing the exiting passengers.

He searched for a familiar face as he walked slowly through the lobby and entered the reading room. Only a

few men were sitting there, mostly traveling businessmen who were leafing through the magazines, studying the stock prices on the last pages of the newspapers, or busying themselves with writing letters. Silbermann glanced around the comfortably furnished room, and for a moment he had a pleasant feeling of security.

“A House is Just a Pile of Stuff with a Cover on It.” When Less Really is More 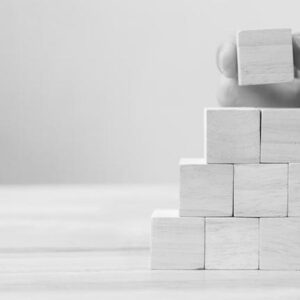 “A House is Just a Pile of Stuff with a Cover on It.” When Less Really is More When I told Monica I was working on a book about why we neglect subtraction and how we can do better, the first thing she asked...
© LitHub
Back to top