The Oldest, The Longest, The Weirdest: A Brief History of Land Borders

Simon Winchester on How We Divide Our World

There is a zone of twenty precisely measured feet of naked North American land, kept strictly clear of people and trees and all invasive botany and on which no new buildings may ever, without permission, be erected nor any ditch dug, nor any road or bridge built, nor any pipe or electrical cable established, and in the exact middle of which stand a large number of white granite markers, a line connecting which officially demarcates the mutually agreed boundary that separates the Dominion of Canada from the Republic of the United States of America.

This is an international land border—at 5,525 miles the longest in the world. There is currently no wall or fence or watchtower built on or along or across the line, except for those movable gates or barriers that have been constructed at the 105 roadways where it is legal to pass through the border, and at the ends of the 14 tunnels or bridges where the boundary runs along a river or across a lake. It is said, proudly but these days quite erroneously, to be undefended and thus the longest such undefended border on the planet.

The line that demarcates the two neighboring states has come about as the result of a number of complicated negotiations and subsequent agreements that have been signed during a lengthy period from the late 18th until early 20th centuries by plenipotentiaries initially from the courts in such places as London and St. Petersburg, and with the signing ceremonies conducted in variety of cities, most of them in Europe, but with the American capital city of Washington, D.C., party to nearly all of them.

By the latest count there are 316 other international land borders around the world. These divisions extend—usually in ragged fashion, and seldom in the kind of straight lines that bound so much of the United States—for something like 154,000 miles. Some of those miles are marked by natural division lines (rivers, mountain chains, swamps) while some others are lines drawn almost at random by politicians and civil servants. There are also 193 island nations in current existence, but these do not by their very nature have land borders, except for those—Haiti, for example, St. Martin, Papua New Guinea, and Ireland among others—that sport such a boundary within their own maritime territorial fastnesses.

Each one of the world’s 317 land borders is defined and agreed to, formalized as a result of agreements between those countries that abut each other, as neighbors; and each has been surveyed with, in most cases, a mutually agreed level of precision. To read a table of these boundaries and their history is to learn much, in the same way that stamp collecting, now in popular disfavor, used to teach much about the world’s historical geography.

One can derive great pleasure in picking at random from the United Nations list: learning of how, for instance, the Albanian border with Montenegro was first agreed to by a delegation of Turkish pashas who went to Germany and signed the Treaty of Berlin in 1878; that the northwestern border of Myanmar, separating it from the Indian state of Manipur, was the result of a victory over the Arakanese by the Burmese army back in 1558; that in 1821 an entity called the United Kingdom of Portugal, Brazil and the Algarves annexed a free-spirited confection of small states gathered around the Río de la Plata’s estuary and known at the time as the Liga Federal, and in doing so set up a line still recognized today as the border between the modern countries of Argentina and Uruguay; and that the border between Ireland and Britain came about in 1921 when the 26 southern counties of the Irish Republic, all with a majority population of Roman Catholics, declared an independence from Britain which the six mostly Protestant-majority counties of the northeast of the island could not and would not accept, and who thus remained loyal, if troubled, and protected behind what would become a highly militarized border, for much of the century beyond.

It is said by the people of Andorra that their 70-mile long Pyrenean frontier with France is the oldest established such entity in the world.

Some borders are of great antiquity. As to which was the first—there are many candidates. There was probably a time during the formation of early civilizations when, say, that in the Nile Valley expanded outward like penicillin in a petri dish, and collided, as it were, with its Persian equivalent spreading outward from the Fertile Crescent. The point of close encounter of these two spreading human populations could well have been near where stand today’s cities of Basra and Abadan, the waterlands of the Marsh Arabs, as well as the site of ancient Ur of the Chaldees. But no archaeological remnants of a formal border has ever been found in the local estuarine sands—just oil fields and argument, the common coin of this much despoiled corner of the world.

It is said by the people of Andorra that their 70-mile long Pyrenean frontier with France is the oldest established such entity in the world, having been jointly agreed, written into a signed charter, and then marked out with boulders on September 8, 1278. Are there contenders still more venerable than this? Hadrian’s Wall, for example, which the Roman legions scythed across the windblown fields of the far north of England, was begun more than a thousand years earlier, and can fairly be said to have been at the least a precursor of England’s present-day border with Scotland. The Great Wall of China is mainly a 14th-century creation (though some of its sections were built fifteen hundred years earlier) and it can be seen as a national border, too. There is an important difference, though. In Andorra, rulers on both sides of the proposed border agreed to its delineation; but neither Hadrian nor the Ming wall builders ever won the agreement of the inhabitants beyond their constructions, who never signed off on the notion that this should be a jointly accepted and formal boundary. The line was unilaterally imposed rather than mutually accepted—a difference suggesting that the Andorran claim to primacy is most probably reasonable and legitimate.

The great majority of the world’s land borders were fashioned in the late 19th and early 20th centuries: a fierce acceleration of nation building got under way in 1850, became territorial mayhem between 1875 and 1899—largely in consequence of European adventurism and imperialism—and reached its climacteric in the first two decades of the 20th century, when 50,000 miles of extra borders, almost a third of those currently inscribed in our atlases, were agreed to and delineated. Many of them were components of the new post-war world order that was drawn up by the Paris Peace Conference of 1919.

A flurry of new boundary-making etched its imprint onto maps and charts after the Second World War, and a fair additional number of lines were added after the Balkan conflicts remade such ancient entities as Kosovo, Bosnia, and North Macedonia where once there had been more simply the single republic of Yugoslavia. But then, however, the territory-making energies became largely dissipated, and now most of the world’s borderlines are more or less fixed and stable. Maybe the names of the countries they enfold change from time to time, and the politics within often alters on a whim. But to all of this the land itself remain sturdily indifferent and unmoved, the human behavior played out on its surfaces merely trivia. Except, of course, where human behavior induces changes to the ferocity of the weather and the levels of the sea, and land may then fall victim to the climate, and has to alter its shape and size as a result.

Yet the boundaries of all too many of today’s countries have less to do with nature—as with China and India, separated by the Himalayan range, or as with Chile and Argentina, divided by the Andes—than they do with the seemingly random apportionment of the hinterlands by politicians, generals, or faraway officials. The United States is one such, its borders being in large part geometric—a straight line drawn for many hundreds of miles and having little or nothing to do with any physical need for separation. A section of its border with Canada, the hundred-mile reach of the St. Lawrence River in upstate New York across from the Ontario towns of Kingston and Cornwall, runs along what is an actual physical barrier, with the centerline drawn in mid-river above the thalweg, the deepest point of the stream. Four of the five Great Lakes can similarly be said to offer natural barriers, but the borderlines themselves have been drawn across Lakes Superior, Huron, Erie, and Ontario in straight and decidedly non-natural ways, paying no heed to topography at all. 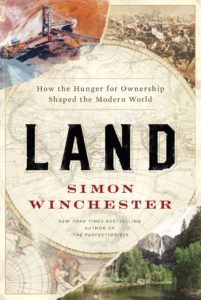 Simon Winchester is the acclaimed author of many books, including The Professor and the Madman, The Men Who United the States, The Map That Changed the World, The Man Who Loved China, A Crack in the Edge of the World, and Krakatoa, all of which were New York Times bestsellers and appeared on numerous best and notable lists. His most recent book is The Perfectionists. In 2006, Winchester was made an officer of the Order of the British Empire (OBE) by Her Majesty the Queen. He resides in western Massachusetts. 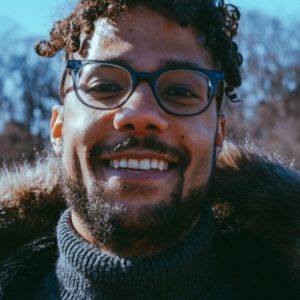 This week on The Maris Review, Mateo Askaripour joins Maris Kreizman to discuss his new book, Black Buck, out now from Houghton...
© LitHub
Back to top
Loading Comments...